A button: attack monsters or talk to NPCsB button: tapped and released quickly, will bring up the menu system for using items in the inventory. B held while hitting D-pad will make the character run down a corridor or across a room (until something "interesting" is encountered). Holding B when next to a friendly character while using the D-pad to move "into" the character will let the player swap spaces (for when the friendly character is blocking the way!) The B button is also used to back out of menus or the Rankings page, Menagerie, etc.L shoulder button: shoot equipped projectiles with a slingshotR shoulder button: hold it to restrict the character's movement to diagonalsX button: brings up a status menu (currently just for saving the game, or showing the player's attack and defense power)Y button: hold it while pressing the D-pad to change directions the character is facing without moving and using a turn. Tap the Y button in the inventory menu to sort the inventory items. 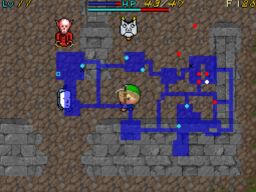 @ K3N1: Although the wax of a candle could probably be melted down and repurposed with a fresh wick... Today at 12:10 AM
Chat 0