Go to download
Overview History
Here is my latest project for the NDS : Ninji & Zarbi.
It's a skill game in which the player controls two characters at the same time, each one of them being on its respective screen.
The music heard during the game is Cherry Blossom Girl by Air.

• How to play
At any time, the two characters Ninji (on the bottom screen) and Zarbi (on the upper screen) are located at the same place on their respective screen. Thus, the player controls both characters at the same time.
The aim of the game is to achieve the highest score possible, by neutralizing Bullet Bills and catching the NDSes that appear on screen. Only Zarbi is able to catch the NDSes, as they always pop up on the upper screen.
In order to neutralize a Bullet Bill, you have to stomp on its head like in Super Mario Bros games, or attack it with a weapon. Only Ninji can handle weapons.
If Ninji or Zarbi is hit, he loses a heart. The game is over when one of the two characters runs out of hearts.

• Buttons
- ◄ / ►: move left / right.
- B: jump. You have to charge the jump first, by holding the B button pressed. The jump is triggered when B is released, and its height depends on the charging time (limited by a maximum height).
Like in Mario games, when stomping on a Bullet Bill, it's possible to jump higher if the B button is held during contact.
- Y: Ninji attacks with the equipped weapon. If the current weapon is the nunchuk, it's possible to make it spin by holding the Y button.
- A: Ninji kicks.
- L / R: choose Ninji's weapon, among: [1] none, [2] sword, [3] nunchuk, [4] shuriken. The current weapon is indicated in the upper-right corner of the touch screen.

• Strategies
- Don't focus on just one screen alone, always watch both of them.
- Choose stomps over attacks for more points. You'll be able to catch the highest NDSes by stomping successively on several Bullet Bills. Attack only when it's necessary.
- It is possible to catch all the NDSes, and neutralize all the Bullet Bills in the game, even the most out of reach. You'll have to figure out the good strategy.
- The game gets easier after a few tries, when one starts to remember the patterns. Warning: the very last part of the game is random though. 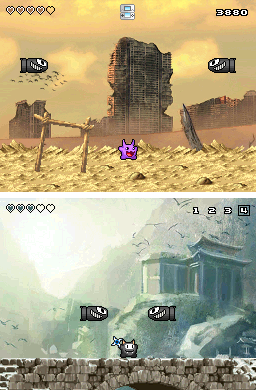