Go to download
Overview History
NDStation is a flasher for the EZFlash 3-in-1 Expansion Pack
which allows you to package a ROM within a .NDS file and therefore
run it from your Slot 1 flash card's main menu. Its purpose
is to make things feel more integrated and unified on your flash card.

Wow, version 1.1 already. This one has PSRAM loading for ROMs
smaller than 16MB, thanks to a great code snippet by cory1492,
and support for a custom borders! Borders have a weird graphical
error, but only the first time the NDS is run. I have no idea why.

Bugfixes are a small graphical hiccup in the GUI and an error
in compilations caused by some cheap hacks I used, also in the GUI.

An important note about mixing PSRAM and NOR ROMs:

The next release should be able to detect if a NOR ROM is
already flashed and simply restore the save. Also, border
support will be implemented soon. Future plans include
compression, something no other 3-in-1 flasher has!

To use NDStation, run the NDStation.exe included in this package.
Some of the functions are self-explanatory, such as choosing the
GBA ROM image you wish to use and where you want it to be copied.

"Game title" defines the embedded title in the ROM. The first line is
automatically set to the basename of the ROM chosen, although it can
easily be changed. "Use PSRAM" allows for faster loading for ROMs
smaller than 16MB.

Clicking "Customize the NDS" will open a menu where you can change
the icon for the NDS file and choose a custom border. "Preview NDS"
gives you a rough idea of how the NDS will appear on R4DS's menu.

"Go..." builds your .NDS file, and is finished when a message box pops
up and says "Complete!" Don't forget to DLDI patch the NDS for your card.

cory1492    - My flashing code is based on GBAldr.
Noda        - For the EFS library that made this possible.
olimar      - Pointed me to FWNitro for GBA booting code.
dg10050     - Came up with the name, since it is a lot like POPS
on the PSP (working title was EFSgba).
Also made the Linux and Mac GUI for me, since
I can't seem to leave Windows.
ZiNgA BuRgA - The GUI is based off of Simple Popstation GUI 2 beta,
http://dpgdownloads.com/ndstation/gui.png for proof. 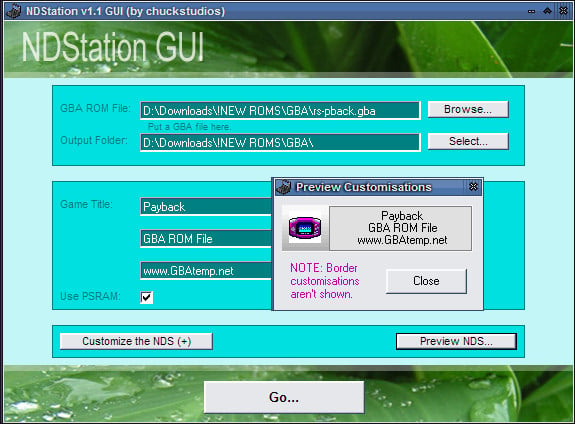 @ M4x1mumReZ: I'm much better and I am so happy to be with this community. 10 minutes ago
Chat 2