Go to download
Overview History
Maik, a young hacker, who has always had a talent for hacking is locked in a bunker. After an introduction which tells you your situation before and after the nuclear accident. Chapter 1 starts.

You are in the bunker where you have locked Laison or at least, I think. You will have to interact with the funds to get the password, open the door and escape from the bunker. Remember, the flash drive is the key.

Once you get out of the bunker, you have to go to a church that is a couple of miles.After an altercation in the road where you "steal" one of your belongings will arrive at the church where you will find, hopefully, with Father Frank.'s Changed somewhat since the last time you saw him, he said he was concerned nuclear accident, but one thing still more mysterious, Laison went to visit his father Frank a few days ago ...

Maik has always been a very impatient and after the conversation with Father Frank gets without thinking of the Church, forgetting that can only be opened from within and is the only key to the Father Frank, who is out.

Controls:
Stylus: Interact with the funds and puzzles.
A Button: Select option from the menu and move text in introductions. Hold to increase the speed of the text.
B button: Go back on the menu and all the puzzles.
Triggers R / L: Previous / Next object in the inventory. 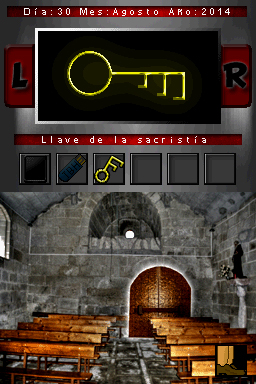 @ KenniesNewName: From his auntie's wife side 23 minutes ago
Chat 2