Go to download
Overview History
The purpose of the game is to control the movement of robots on a factory floor, and get them to take raw material from a Dispenser, put them in a Processor, then take the processed material and drop it into a Collector. This is accomplished by placing instructions on the factory floor grid, and when a robot passes over the instruction, it obeys it. Instructions including turning four different directions, and performing an action. The action that is performed is dependent on what is nearby, this will either be picking up a nearby object, dropping a carried object, or nothing; if nothing applies. It's also possible to introduce additional robots to a stage. There are other obstacles that need to be overcome, such as reaching the different coloured buttons that control the various machines and barriers, and reaching conveyor belts that may be needed to transport objects across a stage. Each stage requires a sequence to be planned, and played out over and over again until at least 5 pieces of processed material are collected. Timing plays an especially important role in successfully getting the robots to perform the set sequence, so play often involves adjusting the location of instructions to alter it slightly. The number of instructions available are limited per stage. Solving each stage requires careful use of the available instructions to perfectly plan a successful sequence. 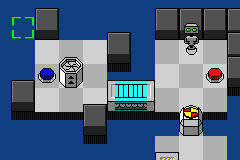 @ Shape: That makes sense, but it is also a Saturday night. 3 minutes ago
Chat 2