Go to download
Overview History
Project description:
The objective of this game is to draw on the touch screen paths by which a ball bounces up to a star, and so, go to the next level, the game has 30 levels (as their first version) in which there are obstacles that prevent reaching the end, plus it has a level editor, save to the microSD to play them later.

How to use:
It has four menus:

1. Start game (starts the game from the first level)
2. Select level (you choose the level at which you want to start)
3. Create levels (menu for the creation of levels)
4. Play levels created (menu and play levels created earlier)


The level editor espesificar only need a starting point, the point of view and draw with the stylus obstacles to reach the final. It has 8 slots of levels, which are stored in a single file on DSpaintball.dat at the root of the microSD, then play them.

Rar is included in the version of flash cart that works only in flash cart (DSpaintball_flash.nds) and that this, is properly patched with DLDI, and a version of emulator (Dspaintball_emu.nds) not use the file saved DSpaintball. dat, you can only create levels and then play them, and that closing the emulator such deletion. 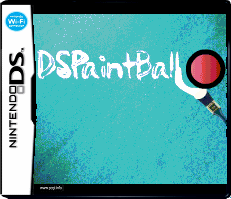