Go to download
Overview History
The aim is to rotate the mirrors to reflect the laser beam from the source to blow up all the triggers and then enter the target. Rotate the mirrors by tapping on them and then dragging to align the mirror at a particular angle. You start with an amount of energy which is constantly declining (the green bar). Directing the beam into a spike or reflecting the beam back to the source will cause it to overload (represented by the red bar). If the source is overloaded too much or if you run out of energy, you lose a life. There are also rotating blocks which only allow the beam to pass at a certain angle, teleports which work in pairs, and blocks which randomize the beam direction. In addition, in some levels there are gremlins which roam about the board and mess with your stuff. You can get rid of them by tapping on them repeatedly.There are a few things I 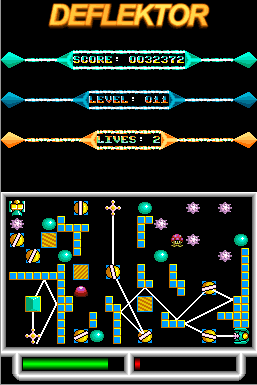