Go to download
Overview History
I've been trying to make a "Game in a Week" this week, but I've come to realize that this isn't going to happen by Sunday. I have made a decent start, though. And I think it's very pretty (aside from the somewhat poorly-drawn sea urchins which I plan to fix later and the tail occasionally poking out from under the jelly). I'm going to go through with this, but I'm not going to meet my original time goal.

The game's name is Deepsea. You control a jellyfish with the stylus and guide the jelly through a randomly-generated world, fighting enemies by colliding with them. I'm actually kind of proud of the technique I used for the random generation - no real initialization, but everything remains constant throughout a game. There'll be enemies and bosses and other gameplay elements added in later. The current area is fairly small (5x5) and will probably be the world size on Easy mode.

The gameplay was/will be inspired, heavily influenced by, and partially ripped off from a fun little browser game I stumbled upon recently.

There's no real gameplay as of yet, so I was reluctant to post this, but I wanted some feedback on some things.
One: the controls are unorthodox, and I wanted to see if you could get the hang of them.

Two: the sinewave background effect (thanks Eldude) produces minor graphical glitches on my flash cart. However, this flashcart is built around the principles of Murphy's Law, and so this might be something that only happens to me. Please test this on your DS and inform me of whether or not you see small, black, horizontal lines flickering in briefly. 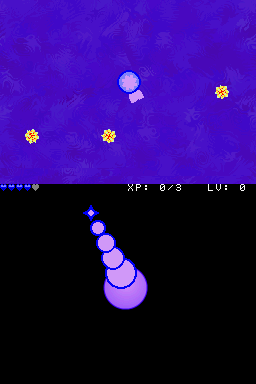 @ RetroNerdGamer: lmao my dad just got one of those today 11 minutes ago
Chat 1