Adapted from the 1985 IBM(TM) PC version of Rogue

The software contained in this archive is freeware, and may not be sold in any
form for any reason whatsoever. This software is provided to the end-user
"as is", and comes with no warranty of any kind. In no event shall the
copyright owner be liable for any damage that may result from the use of this
software.

Anyone is free to use parts of the included source code in their own programs
provided that credit is given to the original authors.

To execute a game command, you have two options. The easiest way is to press
and release the START button to bring up the command menu, which consists of
groups on the left each containing specific commands on the right. After
using the directional buttons to navigate the red arrow to the command you
want to execute, press the START, A or B button to select it. Selecting a
group on the left or pressing the R button closes the menu without executing a
command.

There is also a second option for executing commands. Turn on the key selector
and move the cursor around until the desired command is highlighted, then
press the B or R button. The B button keeps the key selector on for
convenience. There are two help screens that list all available commands
('?'), and the meaning of all onscreen symbols ('/').

While playing, some game messages are too long or numerous to be displayed at
once. To continue, press the A button (Space key).

To cancel a command in progress, press the R button (Escape key) when the key
selector is off.

Many commands work on objects in your inventory. To select an object, move the
red arrow up and down with the directional buttons until it is pointing at the
desired object, then press the START, A or B button. Pressing the R button
(Escape key) cancels the command in progress.

To quit without saving the game, use the 'Q' command.

To save and quit, use the 'S' command, then turn off the game console when the
message says that it's safe to do so. The next time the game is turned on, the
saved game will continue. Please note that turning off the console at any time
other than after saving will cause the current game to be lost forever.

If you ever find yourself inside a room with no exits, use the 's' (search)
command repeatedly along the walls of the room. This command can also be used
to find hidden traps. By default, the SELECT button is defined as 's'.

I would like to thank all the people who have emailed me with thanks and suggestions
and, yes, even donations :-) 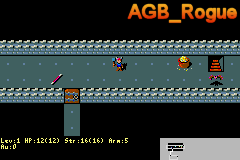