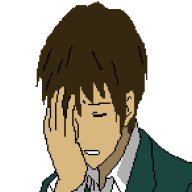 Location
Not Looking After A Girl Who Is God

I got bored and decided to crack open the ~$10 generic eshop visual novel "Harvest December" because I have no life to edit and do whatever with the music and textures and whatever else, when I came across a bunch of image files that seemed to have an unknown format, and that had the file extension ".bin", which tells me nothing. They are LZ10 compressed (I believe), and the headers while still compressed are
Code:
. After decompression, the files' headers are
Code:
which is just the previous one with a few bytes cut out from the LZ10 header. They don't seem to be any of Nintendo's normal formats, due to the lack of a magic header (such as CTEX or something like that; these don't seem to spell anything), so I was wondering if anybody else knew what these were. I don't really know if it's legal to upload them here, so I won't, but they do seem to contain sequences of values that look kind of like rgba (Example: D7 D7 D7 FF, with FF presumably being the alpha value, and D7 being the rgb). I've tried popping them into a bunch of random programs but nothing's came back with info, besides the fact that they're LZ10 compressed. I do know that they are very likely image files and not archives because 1) I threw the files at quite a few Nintendo format unarchivers (ARC, GARC, etc.), and 2) because in the script files, they're referred to as a single image each, but with .png at the end instead of .bin, pointing towards them being a single image each. Help would be appreciated, and I hope I didn't overlook something that makes me look dumb

If you think the decompressed files just have raw pixel data then you could try cutting off any headers and somehow importing them into some image program as raw data
Reactions: AiP24

Location
Not Looking After A Girl Who Is God

Oh dang, after fooling around with the image size (I thought it would be default screen res (400x240) but it was 512x392), it actually worked and gave me the correct image. It seems I was overlooking this quite a bit, so thanks. time to make a converter I guess.