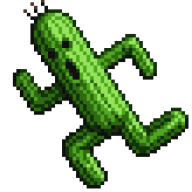 I started doing a Final Fantasy VI Advance editor. Right now it can edit fonts, monster data, item data, spell data and characters base stats and equipment. It is inspired by FF3usME so you'll see resemblances between the two.

It is only working with the US version (U) for now but I plan to make it compatible with the European (E) version soon. I'll also add more features as I am locating the data in the ROM. If you find any bug please report it in this thread or send me a pm.

@ AncientBoi: ditto A moment ago
Chat 2