Seven years later, Nintendo brings us back to the Wii U's classic, Super Mario 3D World, and this time around, there's even more to love.

No matter what your opinions are when it comes to the Nintendo Wii U, the console had a fair few gems on it. Which is why ever since the Switch launched, Nintendo has been porting those titles over to their more successful console. With the Switch boasting Super Mario 64, Sunshine, Galaxy, and Odyssey amongst its library, it only made sense for them to eventually bring over 2013’s mainline Mario game: Super Mario 3D World. Now, it’s finally on the Nintendo Switch, and with a few extra goodies, too!

This isn’t just a slapdash basic port, either; Super Mario 3D World + Bowser’s Fury takes the Wii U release, adds some much-appreciated quality of life changes, kicks the resolution up to 1080p, introduces online play, and most importantly, comes with the side game of Bowser’s Fury, a short but sweet 3D Mario adventure. The QoL changes easily make it far better than the original, as it increases the characters’ movement speed, both in levels and on the map, so the platforming feels more fluid and less clunky. Having played the game on the Wii U, I never would have thought to want things to be speedier, but now that I’ve experienced this release, I could never go back to how the original played.

Super Mario 3D World is really interesting, as far as 3D Mario games go. It has the structure and level design of what feels more like the classic 2D games, yet it's a fully-fledged 3D mainline entry. On paper, that fact makes the game feel far less underwhelming compared to its predecessor, Super Mario Galaxy 2, and successor, Super Mario Odyssey, but such a dismissive comparison doesn't give Super Mario 3D World the credit that it deserves. It stands out in so many unique ways, even if it takes a little time to realize. 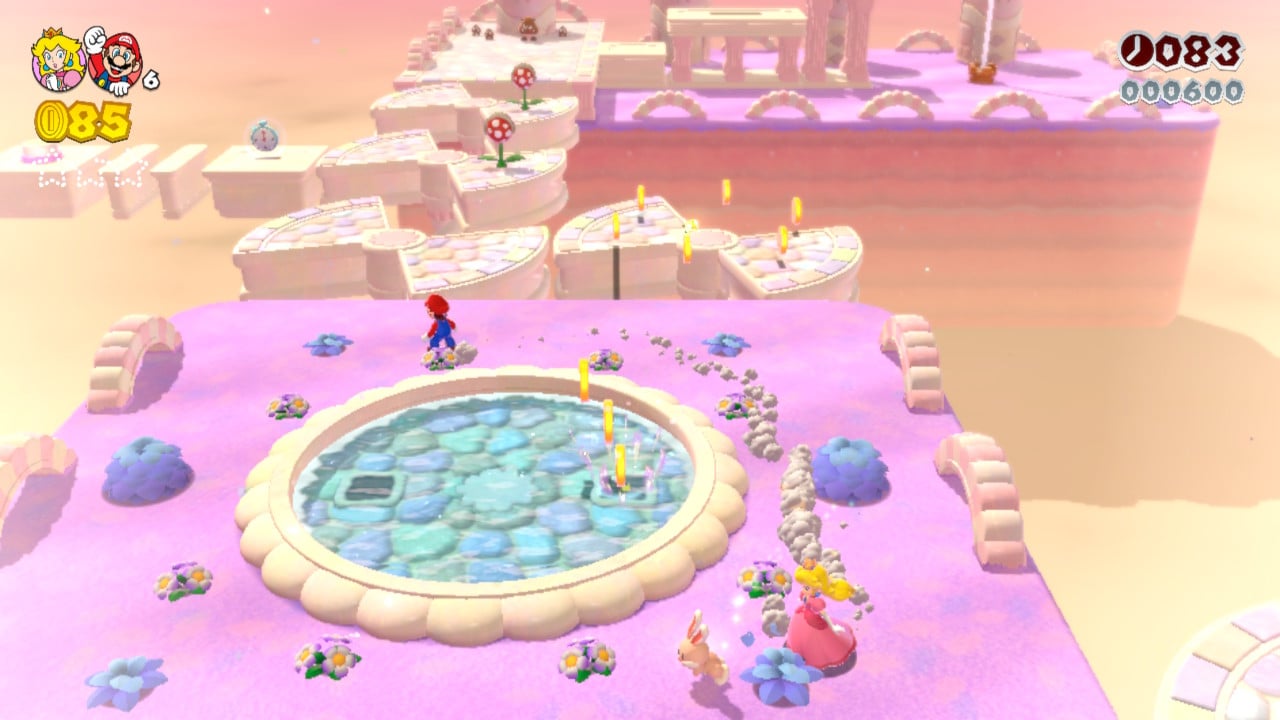 In a twist that actually feels fresh, Bowser isn't interested in kidnapping Princess Peach, for once. This time, he's after the Sprixie princesses, giving Princess Peach the chance to be a playable character! Mario, Luigi, Toad, and Peach are the cast of four that you'll be able to control throughout your adventures through the Sprixie Kingdom, harkening back to Super Mario Bros. 2. Each of them control differently, just as they did in that game, with Toad being super-quick, Luigi having the higher yet slipperier jumps, Peach being able to float for a short time after a jump, and of course, Mario being the traditional all-rounder. These differences are slight, but enough to change up how you might approach each level. It also has the added bonus of spicing up your co-op sessions, with each player having a varied use.

And this time around, you might be playing co-op a little more often. Nintendo has surprisingly implemented online play for Super Mario 3D World, allowing friends across the world to connect and play as if they were in the same room. Shockingly, this feature works quite well. Despite having an awful Wi-Fi connection, personally, I was able to play online with someone on the other side of the globe with only a little lag. Attempting to play with someone else who was much closer and on the same continent (and this time around with a wired connection via a Switch ethernet adapter) worked flawlessly. Super Mario Maker 2 this is not. I'm really pleased with the online mode present in the game, and it's especially useful to just play with friends that are far away, given the climate we're all living in right now. 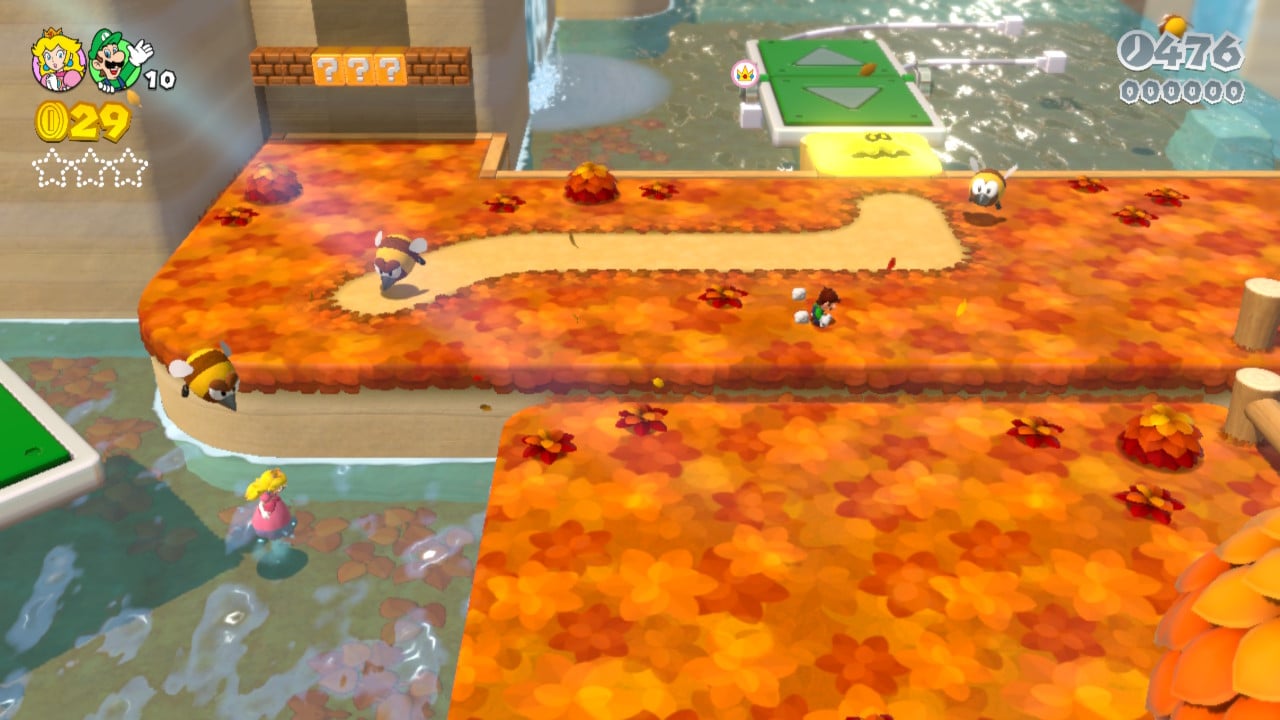 Where the game shines brightest is in the different focuses of each stage; the visual designs are the typical tired Mario fare, but the level designs themselves are quite varied. There's always a clear platforming mechanic that the game wants you to play around with, whether it's invisible walkways, rotating spiky squares, or flipping platforms. If you're breezing through the levels with a friend, you might find them to be fairly straightforward, but if you try to collect all the green coins, that's where the genius of the level design shows itself. A singular platforming idea is introduced, and getting all three coins will require you to master that level's individual concept. It's the perfect mix of challenging and pure Mario fun that we've all come to expect from the franchise.

Beyond online play and gameplay improvements, this version of the game also adds the titular Bowser's Fury side game. In this little outing, Mario and Bowser Jr. team up to take down a giant, well, furious Bowser who's on a rampage. From here, you're tasked with collecting cat shine pieces by completing small objectives in an open-world island setting. It feels part Super Mario Sunshine and part Super Mario 3D World, in a weird mixture of what isn't quite a fully-realized 3D Mario adventure, but a very fun one all the same. Bowser's Fury is genuinely enjoyable, offering up interesting platforming challenges that feel almost like a tease of what Nintendo has in store for the future. There are tons of cool power-ups to use, and the little missions blend traditional 3D Mario gameplay with an actual open world--creatively split up by large swaths of water--that ranges between multiple themes. Its biggest fault is that it's so small in scope and is short enough to be beatable in a single sitting. 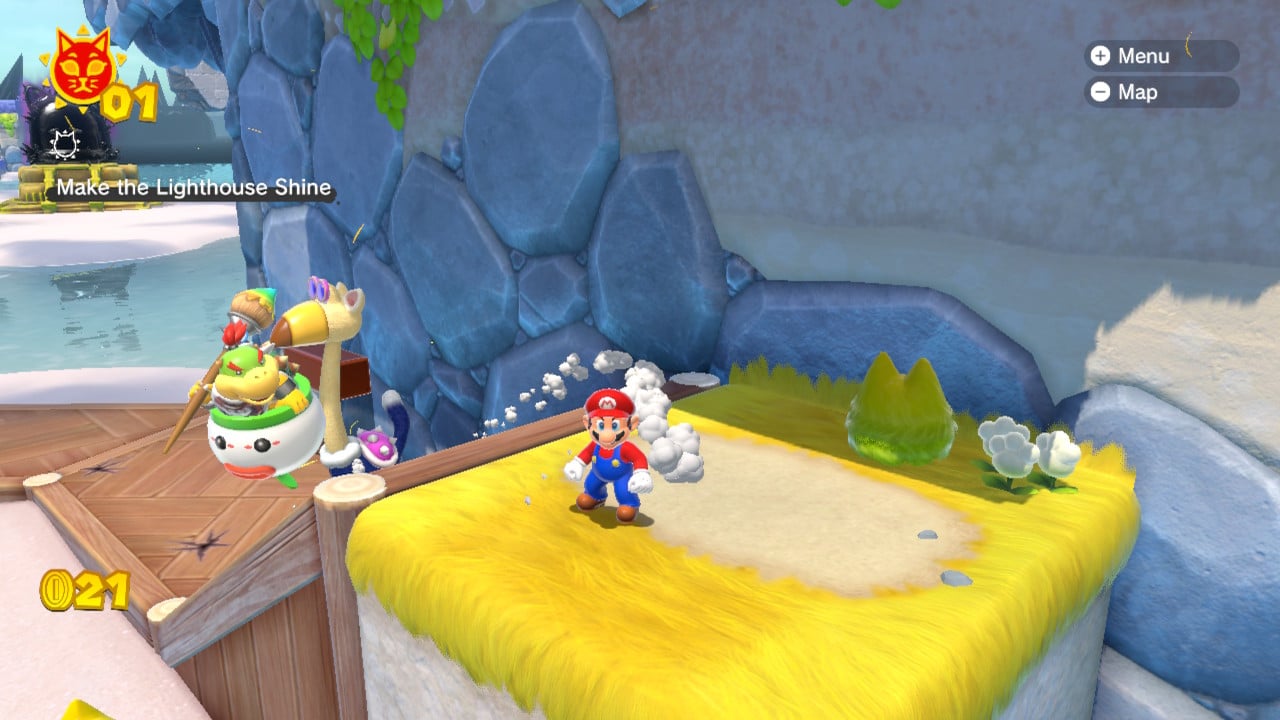 Super Mario 3D World is an absolute blast, especially thanks to the addition of online co-op that actually works. Bowser's Fury, too, is a delight, even if it's over far too quickly. If you never owned a Wii U or just haven't gotten around to trying it yet, being able to experience the game on the Nintendo Switch is the best way to play a great, underrated Mario adventure.