An LED pixel display, mixed with a speaker. We've seen it before, but does Divoom manage to amaze again, with their new and improved Tivoo-Max?

Last year, I reviewed a piece of hardware that quickly became one of my most favorite possessions. It sat upon my desk where I would see it every day, and could change its appearance to suit how I felt in the moment, or even set it to look more festive for the holidays. That little item happened to be the Timebox Evo, a box with LEDs on the front for making pixel-art, and a speaker on the back, for listening to music with. So we’re back again once more, to look at the Timebox’s bigger, badder improved version: the Tivoo Max.

When Divoom added the “max” moniker to the Tivoo, they weren’t kidding; pulling the device out of the box reveals it to be much larger--and heavier--than the Timebox Evo. In this new form, stylized to look like an old CRT television, the LED pixel screen looks even more fitting. You can get it in either white or black, with chrome-colored accents on the dial and legs. The white model is the one pictured here in the review, and I found it to be a fantastic design, looking like an old retro 70's TV, with the curved edges and vents on the sides capturing that kitschy style of the era. It definitely is an eye-catching piece that'll get attention no matter what angle it's seen from.

On the top of the device are four touch-sensitive buttons, consisting of volume up/down, play, and alarm. The functions of these buttons are exactly what you think, and they work nicely, for instances where you want to tap the speaker to turn off your alarm, or pause your music without taking your phone out of your pocket. Over on the right side is a dial, which scrolls through different features of the Tivoo-Max. You can turn it off, see the current time, set up a nightlight, view the most popular pixel designs, or watch the pixels react to your music in visualizer form. There are so many features that this thing has, and while you might not use some of them more than once other than just trying them out, such as the Tetris minigame, I nonetheless appreciated each function the Tivoo-Max had packed in. 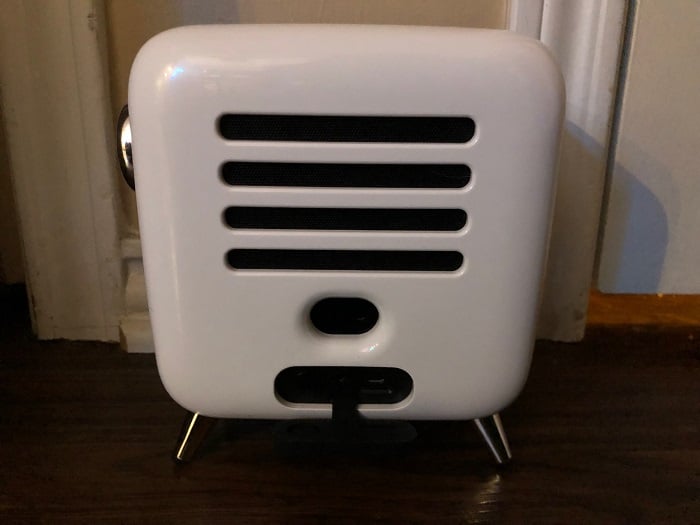 The Tivoo-Max loses the portability that the previous smaller incarnations had, but to compensate, you've got a much more powerful speaker, a larger screen, and something that really catches the eye and stands out as a setpiece during a party. This time around, there's stereo speakers and a subwoofer packed in, behind the LEDs. You're not going to want to bring this around in your bag like the Divoom Timebox Evo--the Tivoo-Max is much more fragile--but instead, find a permanent place in your room to display it.

The sound quality output is shockingly good. Not only can it get incredibly loud, but the 2.1 speakers also manage to play some great-sounding audio. I compared it directly with the Ultimate Ears Boom 3 and the JBL Pulse 4 speakers, by playing the same song through Spotify across all three devices. The Pulse 4 has more of a bass-y sound, while the Boom 3 felt "sharp", focusing more on the highs. To contrast, the Tivoo-Max was more of a middle-ground between the two, having solid all-around capabilities, with good bass and a warm overall sound. For casual Bluetooth speaker listening purposes, I found myself connecting to the Tivoo more than the other two speakers. Each has their own purposes--the Boom 3 is meant for more rugged everyday life use, and the Pulse has a more portable form factor, but if you just need something nice for your desk or bedside table that can play some good audio, then the Tivoo-Max wins, in my book. It could handle any audio I threw at it, from loud bass-y songs, high-pitched pop music, or calming sleep-time sounds.

As with all other LED-focused products in Divoom's lineup, the Tivoo-Max is controlled by its corresponding app, available on either Android or iOS. This is where things get impressive: the app has a rather sizeable community creating all sorts of artistic designs, ranging from anime, to video games, or just any popular subject. You can make your own sprite-art, of course, but if you're not as artistically inclined, or you just want to see what others are drawing, there's a whole lineup for you to browse. It's all separated into categories, like "character", "nature", "business", or "pattern". Character is pretty self-explanatory, housing designs for characters of any medium, like Pikachu, Sonic, Homer Simpson, or Mario. So long as you can design it within a 16x16 grid, the possibilities are endless! 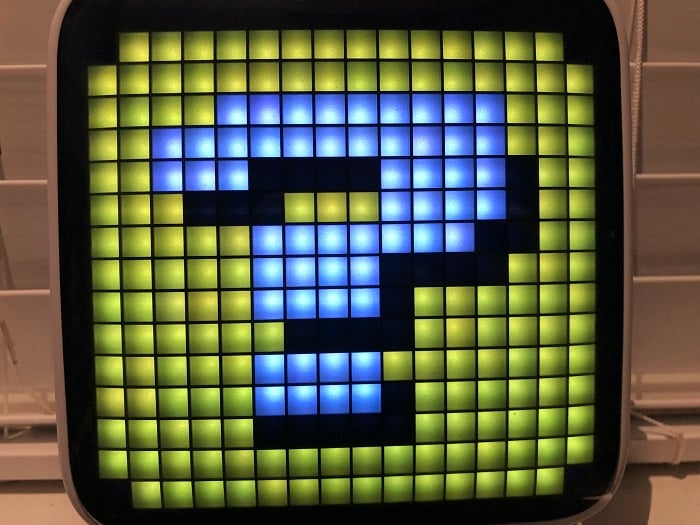 This isn't just a pretty screen to display your designs, either. One of the best and most useful features of the Tivoo-Max is the notification system. When your phone is connected via Bluetooth, alerts such as phone calls, texts, Twitter, WhatsApp, Facebook, or Snapchat will appear in a cutesy pixelized icon on the screen of the Tivoo-Max. It's such a great way to keep track of your phone notifications, without having to constantly look down at your phone all the time, or let you easily see alerts you might have missed if you keep your phone on DnD/mute. My only complaint is that the alerts are limited to more popular services, and can't be customized. You've got Skype alerts, but being able to set my own, for say, Telegram or Discord, would be really cool.

A complaint that was raised in the comments of the previous review noted that some may find the lighting of the LEDs to be uneven. When directly comparing both, I personally didn't find an issue with said lighting, though I could tell that the colors of each bulb felt more accurate with the Tivoo, when using the drawing app. It may come entirely down to personal preference, though. Regardless, images are attached, to show the quality of the screen and the lights behind it. 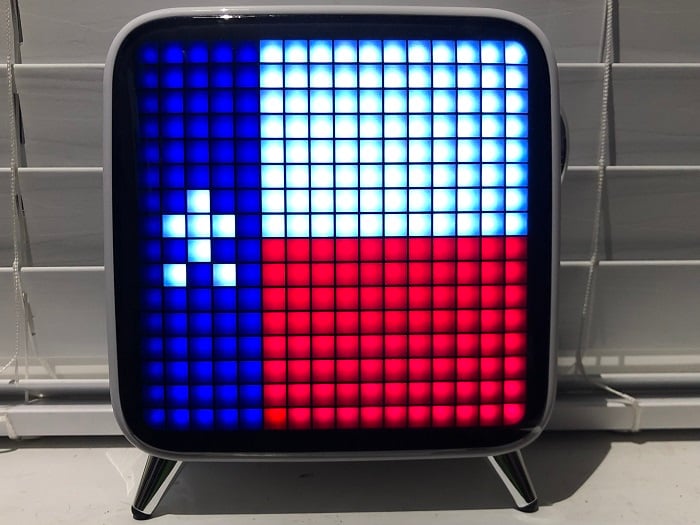 This is honestly the perfect thing for people who love having a little personal flair in their bedroom, or on their desk. Need a little holiday cheer? Put up a nice pixel-y Christmas tree. Want to show your Texas pride with a 16x16 version of the state flag, because you enjoy broadcasting to everyone in your house that you love your hometown? You can do that! I get such a kick out of seeing the Tivoo-Max out of the corner of my eye, and catching whatever design I've got set. It puts a little smile on my face. It comes at a much steeper cost than its smaller brethren, at $199.99, but if you need a solid Bluetooth speaker that has the added ability to broadcast pixel-art, then you really can't go wrong with the Tivoo-Max. Should price be an issue for you, then the less stylish Timebox Evo is a fraction of the size and cost, at $49.99, but still hits those high notes of being able to play around with creating pixel-art. 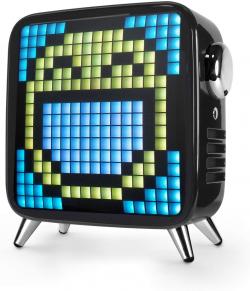