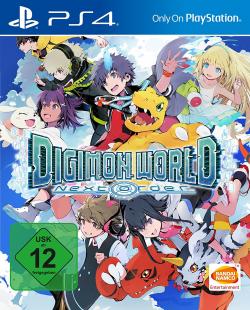 No Meat no Digi life
Originally released for the PS Vita in Japan this game received mixed reception from fans of the franchise. Now that the game is being released globally for the PS4 Bandai decided to put that extra work into improving the game rather than just do an easy and quick port like with Digimon Story Cyber Sleuth. How much did it improve? Quite a bit actually.

Intro
Do you remember Digimon World for the original Playstation? Do you also remember how hard it was to get into it without looking up stuff on the internet? I sure do.
Luckily Next 0rder, which I will refer to as Ne0 for shot drom now on, isn't that. Well, it's a Digimon World sequel alright. You still have to tame Digimon as a Tamer, feed them, bring to the toilet, train, so on and so forth. They'll eventually die and you'll have to start over again from scratch.
It's perhaps by far the purest representation of Digimon franchise you will see. Digimon are V-pets, special Tamagotchis made to appeal to boys by adding a competitive element to it, battling other Tamers. These V-pets have to be taken care of in real time and were very popular in the late 90's among kids. And these V-pet's also eventually died.

I'd like to apologize for the constant comparisons to Digimon World and Re: Digitize in advance. It's hard for me to write this review without comparing this game to the two.


Story & Presentation
You have been sucked into the Digital World via your V-pet. Machinedramon are rampaging everywhere in the digital world and it's up to you to save the Digital World from destruction. Similarly to Digimon World on the original Playstation you also have to recruit Digimon back into the town to expand it to make your Taming job a lot easier. On your way you'll encounter some other human characters who also got sucked into the Digital World as well as the boy nicknamed Mameo, who fans should recognize as the boy you play in Digimon World. With the help of your friends you'll eventually uncover the "mystery" of who's behind the Machinedramon attacks and put an end to this.

​
The Story is by far the weakest point in this game. It's poorly paced, characters mostly not like able, towards the end the chapters consist of only boss fights and cutscenes. I could go on about how much I hate silent protagonists when done wrong, and Bandai is great at doing them wrong, or how useless the sidekicks Himari and Kouta are but I'd rather focus on the good parts.
Mameo, who is clearly the main protagonist from Digimon World 1, was by far the most fascinating character in the entire game. He was by far the best written character in the whole crew and he expands the lore in a way that makes the theorist side of me fired up. He's also responsible for half the nostalgia you'll be experiencing in this game so there is that.

​
For me Digimon World was always about the world, no pun intended. Exploring the bizarre and imaginative landscapes and meeting all the different Digimon was always fun. Each of them had their own little story and character. It's kinda like a western RPG if you think about it. Ne0 hits almost the same mark. You'll spend most of the time running around searching for Digimon and recruiting them to your town where they open up a shop or be useful in some other way. And unlike Re: Digitize that had it's focus in the completely wrong direction, in Ne0 almost every Digimon you recruit is useful in some way. The list of useless Digimon is actually really tiny but that also brings an issue that certain town upgrades are spread way too thin. Especially since you have to upgrade facilities via materials now. With the PS4 version there were a few unrecruitable NPC Digimon added all over the world who offer daily activities and make the world seem more alive. It's actually believe-able now that the meat troops and vegie troops are in the middle of a war. It's actually believe able that the Bone resort is an actual resort. And these NPC Digimon also expand the lore a little bit which is always nice. I know this doesn't sound that impressive but having played both the PS Vita version and the PS4 version of the game this means the world for me (again no pun intended).

​
Another thing that the PS4 Version does it spreading all of the content of the Vita version across the entire game. Recruiting Digimon gives your town prosperity points. In the PS Vita version you only needed 40 out of 200 to beat the main campaign. It was so little that you could end the game in 6~8 hours even if you didn't know what you were doing. With the PS4 version you need 100 out of 200 prosperity points and that will take you at least 32 hours and that's only if you know what you're doing. It also took me 4 generations of Digimon rather than 1 in the Vita version. Spreading the content like that also helps to properly pace the story since now the later short chapters aren't just cutscenes with bossfights. You also have some gameplay in between but it doesn't fix the issue entirely.

​
The Presentation on the other hand is a mixed bag. The graphics look dated and even worse than Cyber Sleuth (most noticeable during the special attacks). The environments are bright and colorful and very distinct from another but the same Digimon World 1 aesthetic, that is packed to the brim with detail is unfortunately gone. The game runs at 60FPS but dips slightly in the most bizarre places. This game runs on the Unity engine and I pray to god that Japanese developers stop touching that engine since it runs extremely poorly on both Vita and PS4. In case of the PS Vita the presentation is even worse. Washed out colors, low res textures, framerate constantly dipping all over the place and lower bitrate soundtrack that looses some of it's detail. Speaking of which, the soundtrack is amazing. During the day you have very upbeat and cheerful music that really helps to paint the whole picture and at night the music stops and you only hear nature noises like the wind or owls, very atmospheric. There are also a few soundtracks remastered from the original Digimon World which should make every fan of the original wet (I know I was). And the music track "Accentier" sung by Eir Aoi is also in the game providing some awesome anime-like moments when you cross evolve your Digimon during battle.

​
Gameplay
Similarly to Digimon World and Re: Digitize, the gameplay consists of you taking care of your Digimon by feeding it, praising when it performs good or scolding when it doesn't, visit the toilet when they have to do their business and cheer during fights.
Unlike the first two games you have 2 Digimon now and that brings some good and bad things with it. For starters you can now cross evolve your Digimon during battle once per day or randomly when both of your Digimon get knocked out. This is a cool game mechanic to create anime-like moments and made me more connected to the Digimon themselves when they turned around a loss into a win. Unfortunately the addition of a second Digimon also means that you have to micro manage 2 Digimon at the time which can be a pain in the butt especially once enemies start using abilities that hit multiple targets. The command system has been replaced by a cheer system where you no longer yell tactics at your Digimon like defending, getting some distance from the enemies and such, instead you now press X every time you Digimon hits an enemy or lies on the ground because a heavy attack knocked him down. This builds up Order Points which you can use to tell your Digimon direct commands like blocking for a few seconds or using a specific attack from their arsenal. However the special move that deals incredible damage is also tied to order points which means that outside of blocking you won't really use the other options that often. It also doesn't help that this system makes way more sense having just 1 Digimon. Timing your cheers and blocks is infinitely more easier if you only have 1 Digimon to look at and you don't have to be constantly checking a separate menu just to see who the enemy is focused on. However it's a system that's more intuitive than what we had before and new commands are getting unlocked by leveling up your tamer instead of being tied to the intelligence of your Digimon so it's a system I wouldn't want Bandai to abandon for a future Sequel.

​
Another thing that has significantly improved the gameplay is the history tab for the individual Digimon. Previous entries were always very secretive about which stats you need to evolve your Digimon. This was such a bad decision that the games were ultimately dubbed as being "Only fun if you have a strategy guide". Ne0 fixes that by making the Digimon unlock more and more bits of information in the history tab each time you praise or scold them. These stats also are very specific and help tremendously when training your Digimon. The game also has been built more around the gameplay loop of your digimon dying and being reincarnated through tamer skills. Literally everything you do in this game gives you tamer experience which is used to level up you tamer. Each level up gives you skill points that you can use to buy upgrades like inheriting more stats upon death, increasing life duration, regenerating HP and MP through walking or unlocking more, better commands for battles. It's a very good system since it gives the player a sense of progression even if their Digimon might not have been that useful this life cycle.

The Questing in this game is a mixed bag. They're well written, giving the Digimon enough personality to not feel like a box on the checklist but they all are essentially fetch quests. There are no mini-games, like curling in Digimon World and some Digimon are so easy to convince to move to the city that it's unbelievable you had to talk to them at all. Some of them even downright say they were on their way to the city but stopped for some dumb reason and now that you showed up they remembered what they were doing. In case of the Leomon quest, which is by far the longest quest in the game recruiting Digimon goes against what is actually happening doing in the area. Leomon's troops are supposedly in a war against the Rosemon troops. However doing his quest makes sure more and more soldiers of him leave the battlefield and move to the city and they're already outnumbered. I don't know why this was overlooked, even for the PS4 version since a simple change would fix this entirely.

​
The game doesn't have a real multiplayer mode like the previous entries unfortunately but it has network battles that mimic the V-pet battle system completely. This is just an optional extra and a cute nod to the series origin and only really serves as extra fan service and a way of getting your hands on some strong items early on in the game. Luckily it doesn't require PS+ so there is that but a full fledged multiplayer mode would have been much better since Re: Digitize was very good at expanding it by adding Tag tamer battles and 4v1 Boss battles. It's a shame that this feature didn't make it into the game.