In this review, I’ll review one of the most original gaming accessories I’ve come across in a long time: the Azeron Classic Gaming Keypad. Originality aside, how does it fare when it comes to functionality?

When it comes to gaming keypads, what comes to mind are those devices that look like a split keyboard with keys within the reach of one hand’s fingers and a palm rest underneath. Most likely, the Azeron Classic Gaming Keypad’s hardware design is far from what one would think of a gaming keypad. It looks like a prop you’d see featured in a cyberpunk movie or maybe even in Cyberpunk 2077 than a device you’d actually see on someone’s gaming desk. 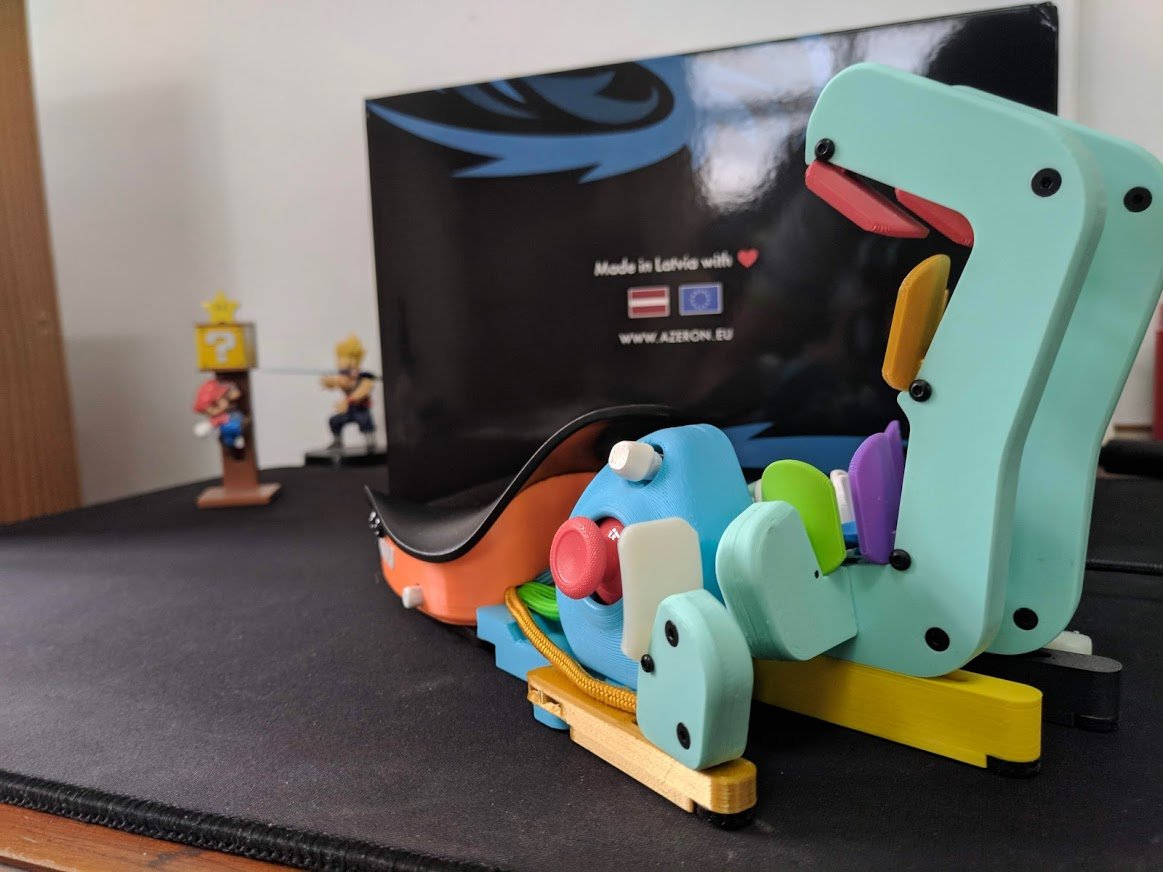 However, the design does not come from a fever dream but is the product of years of work which started as a personal project for a Latvian couple. After receiving positive feedback from friends, they founded Azeron so as to make the keypad available to everyone.

Despite its futuristic look, the Azeron Classic might look familiar to you because it’s essentially a 3D-printed model of a supinated hand, with clawed fingers; along which are 26 programmable keys. These keys aren’t regular keyboard keys either but are more akin to triggers that offer a satisfying audible click when pressed.

And they are also satisfying while gaming as they are very accurate in practice. I’ve been playing The Outer Worlds and Star Wars: Squadrons on PC with it and haven’t come across any issues with the Classic’s responsiveness. I swapped the keyboard+mouse combo to the Azeron+mouse one and I was able to thwart the Board’s plans in The Outer Worlds and successfully maneuvered my X-Wing and TIE Fighter in Star Wars: Squadrons as accurately, if not more so, than with my trusty keyboard.

I won’t lie though; when I first saw the Azeron Classic, I thought that it was rather intimidating and would require a steep learning curve in order to get used to it. However, I was honestly surprised to use it as second nature the moment I first plugged it in to play a game. Each key is easily accessible with a flick, tap or press of the corresponding finger and controlling the joystick with my thumb naturally resting on it felt intuitive. The keys higher up on the “towers” (the vertical finger-like projections) need a bit more reach but I’m assigning lesser-used actions to these. And, of course, to get the most out of the Azeron Classic, keybinding is a must.

With its dedicated software, each of its 26 keys are fully programmable, which includes 20 of those trigger-like keys, a clickable directional switch and a clickable analog stick. The latter is also programmable and you can further bind key combos and macros to suit your gaming needs. Yes, the Classic won’t have as many keys as a traditional keyboard but it does offer plenty of hardware and software options for gaming ergonomically without compromise. 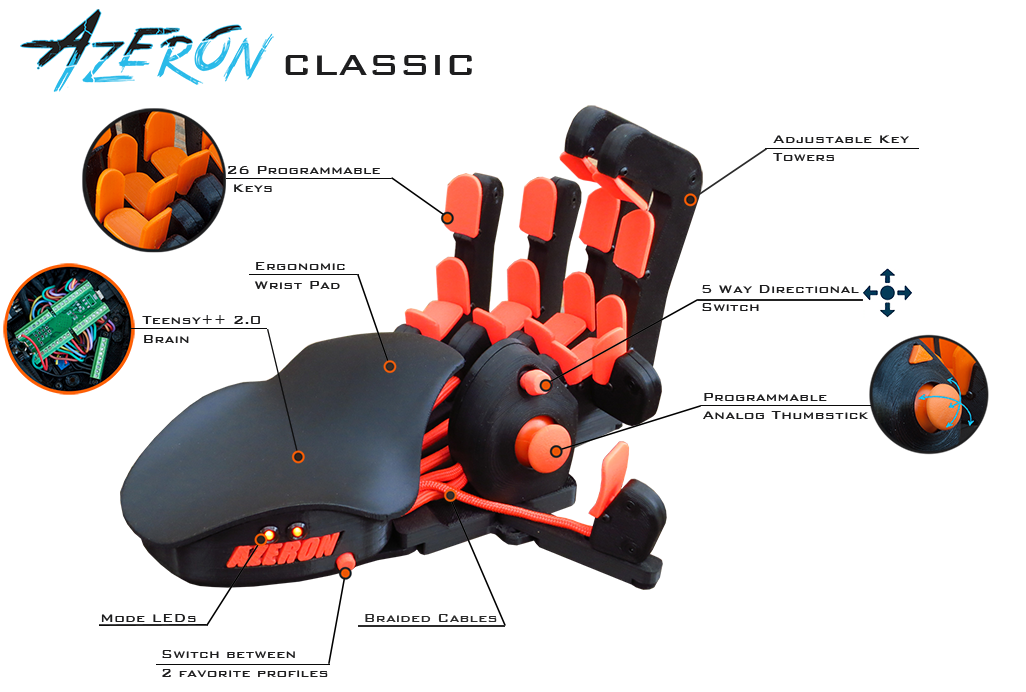 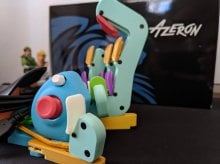 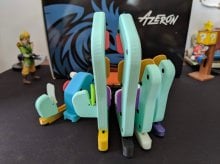 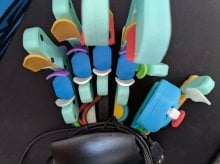 Through its on-board memory, the device stores 2 profiles which you can set up and customize via the app. And since they are stored on the device, you won’t need to install the software if you use the keypad on another device and can just use your favorite keybindings right off the bat. There’s a button that lets you toggle between those profiles on-the-fly and two indicator LEDs that indicate which profile you’re currently on. But if you are playing on a PC with the software booted, you have access to two more profiles. The hiccup with the official software is that it is only supported for Windows and Mac/Linux users will have to resort to a third-party software (Azeron recommends Joystick mapper for Mac and AntiMicro for Linux). And if you want to use the Classic for gaming on a console, you’ll need an XIM device as the Azeron is considered as a keyboard and it will work only on games that support keyboard input (for PC, all games are supported).

Moreover, the anatomical design approach also helps in making a comfortable gaming experience with the Azeron Classic. My palm and wrist sit comfortably on the dedicated pad as it packs some curvature for an ergonomic fit. Here I’d like to note that a soft pad is lacking. The plastic pad can get moist on warm days and while it’s not uncomfortable per se, a soft padding would have enhanced the overall comfort. 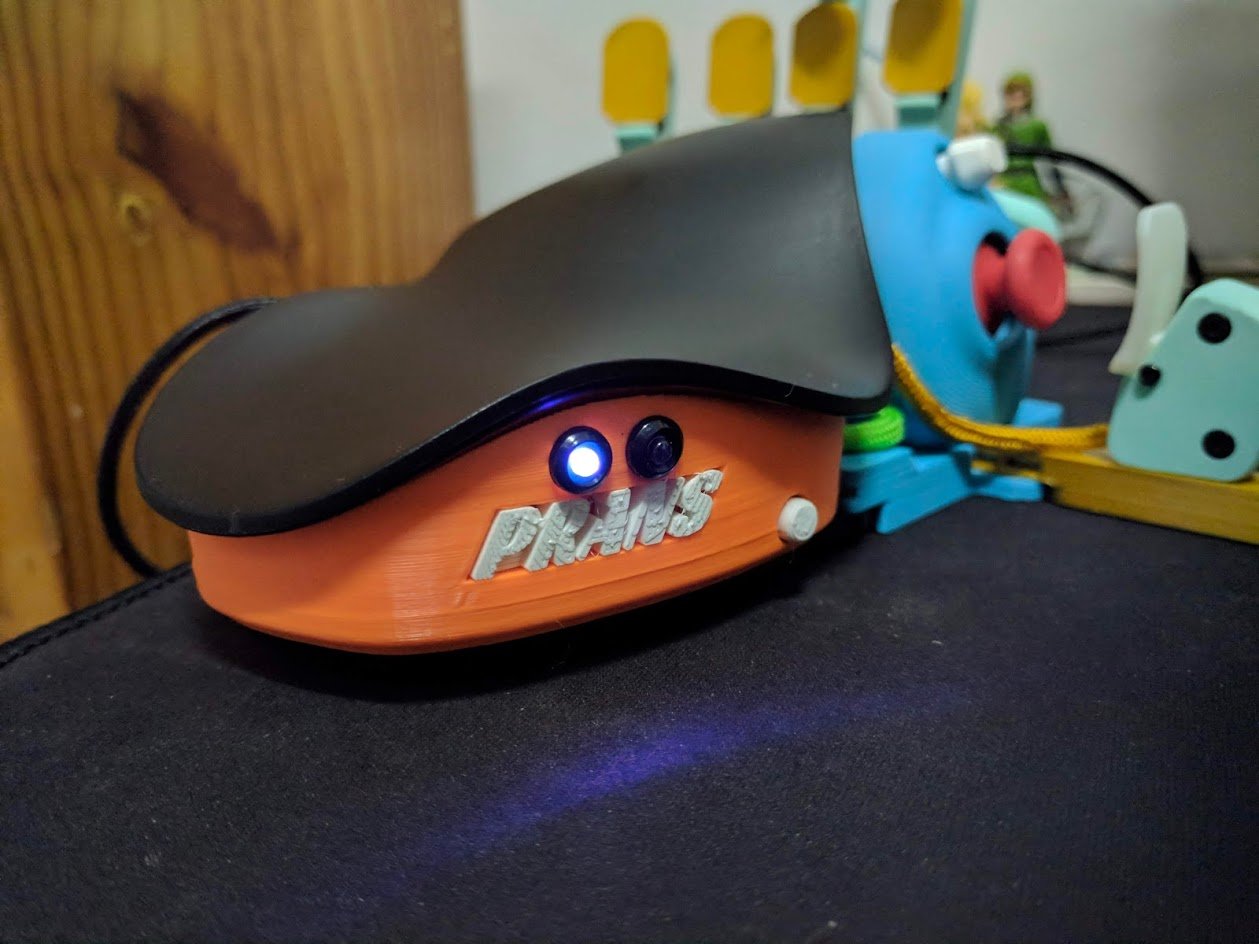 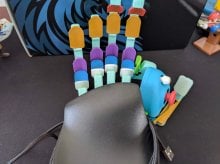 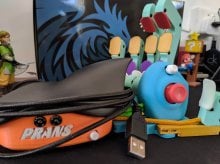 Luckily, you can customize it by sticking a soft padding to it or DIY-ing one. As a matter of fact, the whole device is pretty much customizable. With a screwdriver, you can adjust the angle and length of the towers to make for a more comfortable fit for your specific hand (there’s a hand size guide when you place your order). At first I was hitting some keys involuntarily but adjusting the keypad to fit how I position and spread my fingers did the trick. Azeron also has a leftie option, which is always nice to know because this demographic is often left out when it comes to gaming peripherals. 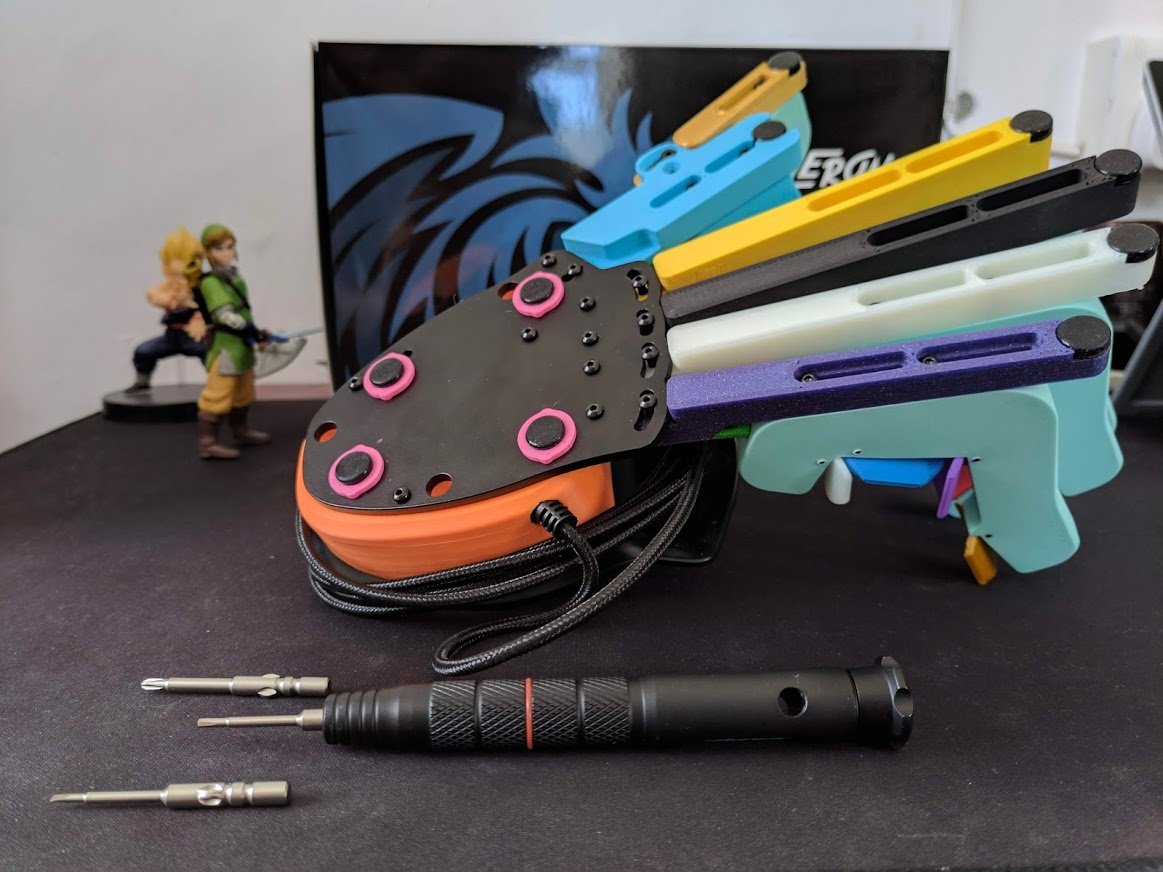 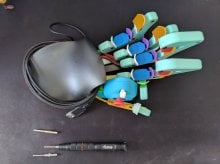 When placing your order, you will also get the option to choose the color of the device’s base, keys and even the cables! As you can see, I went pretty wild with this feature (I even sprinkled some fluorescent keys in the mix!) but Azeron has no problem turning my wild creation into reality and they even printed my name on it! So you can really make a device that’s uniquely your own with Azeron’s customization options.

Additionally, even if the device is mostly made up of 3D-printed components, it feels sturdy and of respectable quality. The tough metal base and anti-slip pads help keep the Classic in place so that it won’t move around during frenetic gaming sessions. Should any damage occur to your device or you want to replace a component, Azeron sells spare parts for the device which can easily be self-repaired with a screwdriver. In fact, each Azeron keypad is individually hand-assembled in Latvia after the parts have been printed out. This is a nice touch that I found to give some added (literal) personal touch to each unit.

One downside that I noted with the build is that the 2-meter USB cable cannot be easily detached from the device for easy storage or just to declutter your desk from cables when not gaming. It can only be accessed by unscrewing the base due to the nature of the internals located there. Having an easily detachable cable would have made for easier storage and it’s really one of the few disadvantages of this already impressive device. 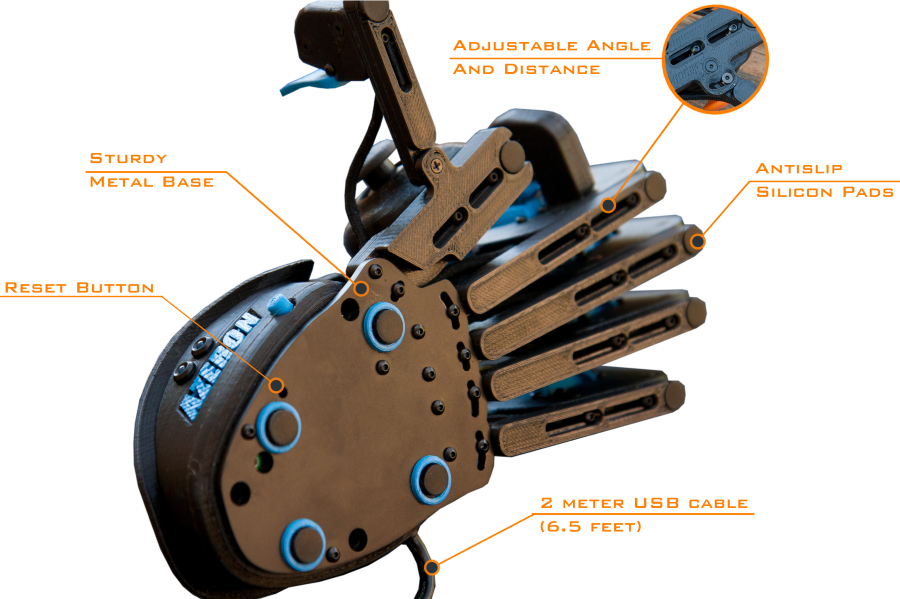 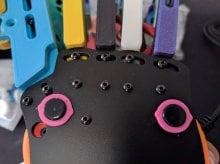 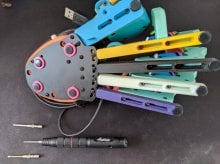 On the side of the box that the Azeron Classic comes in are written the words “New Gaming Experience”. And this is no exaggeration. Really, the Azeron Classic made my gaming experience more comfortable as I’m not bending my arms to reach WASD on my keyboard but I’m using the analog stick on the keypad where my thumb naturally rests while my elbow is at a comfortable 90 degrees to my desk. I’m not stretching my fingers to hit Shift to run or C to crouch but just easily tapping my fingers on the corresponding key bound to those actions. The ergonomic design and easily-accessible keys require less effort to perform in-game actions and honestly, I will find it hard to switch back to my keyboard for FPS gaming my PC when I have the Azeron Classic handy and giving a better experience. Sure, it might take some getting used to if you are playing several games that need different bindings but this is a minor detail that can be overlooked given the superior experience the device offers.

I must say that as a product from an independent company, the Classic is quite impressive. It’s easy to use, highly customizable in both looks and functionality and is a unique addition to anyone’s gaming setup. Given these offerings and that it is a hand-assembled product, the €150 price tag is well worth it. There’s also the option of the Azeron Compact at the same price but without vertical towers and two buttons less than the Classic. The Compact was made for XIM (console) players but is also suited for PC gaming. I haven’t tried it myself but the Classic is well worth the investment.

I get that its appearance might not be to everyone’s taste but if you’re looking for a gaming keypad that packs a unique look that does not compromise on functionality, then the Azeron Classic won’t disappoint. In fact, I found the Classic + mouse combo to be a net improvement over the traditional keyboard+mouse. 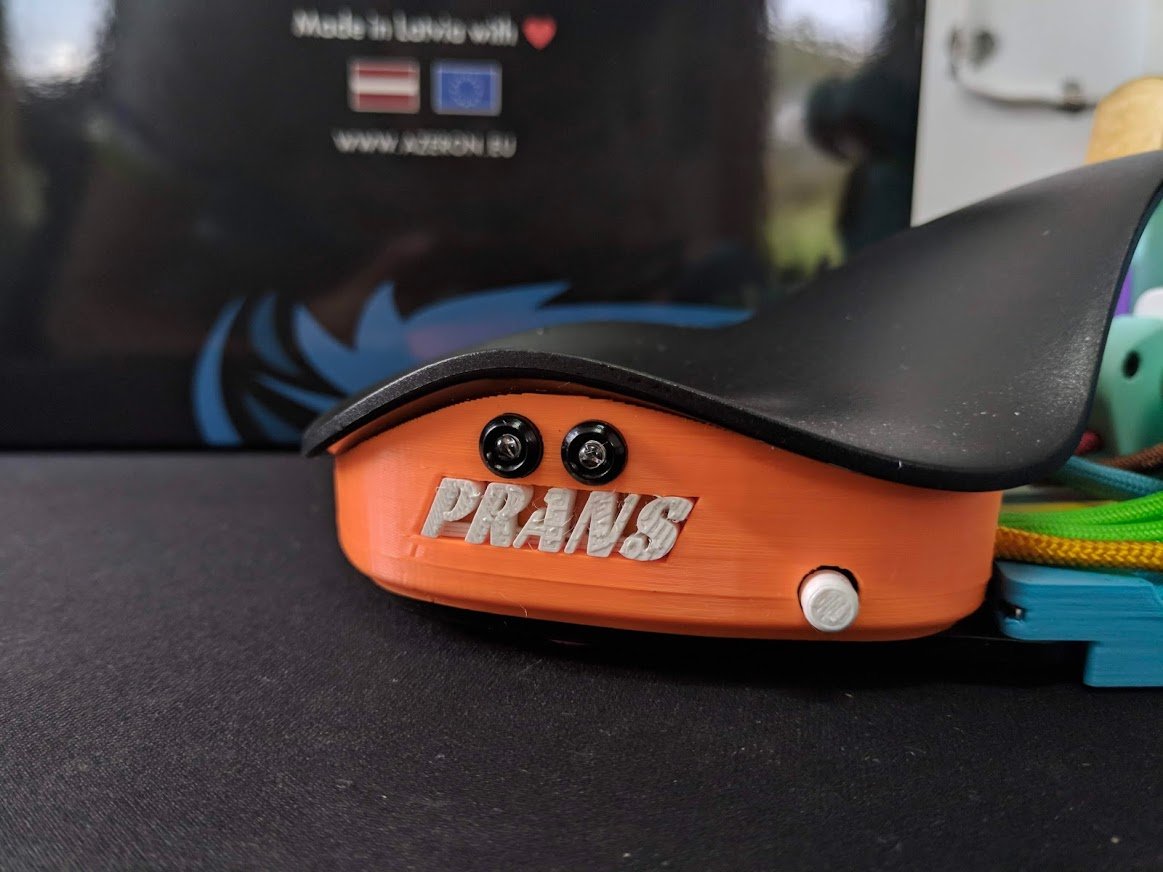