Go to download
Overview History
Description:The Christmas Turkey is a game where you have been given the task to look after a turkey (The plot is implemented in the game). It appears like a platform game where you control a turkey. The game contains four levels, the aim is to collect all the 100 seeds on each stage as quick as possible. Your score is based on how much time that is left after you have collected all the seeds. So basically try to beat it as quick as possible and get a nice score!The game is (as you might notice) made to look and sound NES-ish.Finally, please play it on a real GBA to get the most out of it!Controls:Use LEFT and RIGHT to move.Use A to make a jump.Hold B to move faster.Press and hold A in the air to fly for a bit.Hold A while falling to glide.Press START to pause.* Jump while running to make a slightly higher jump.* You don\'t have to release the A-Button after a jump to start flying.Special Instructions:There are several lifes and time-ups at the levels, make sure to collect all of them to get a better score. The bonus for each level is simply based on how many lifes you got when you finished it. 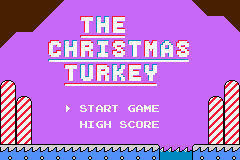