Go to download
Overview History
Story:It is December, and Santa is preparing to give his toys to all the children of the world. But he got lost on December first when his sled crashed in the North Pole woodlands. Now he needs to find his way back in twenty-four days or else Christmas will be ruined for all the boys and girls of the world! To return, Santa must find and return as many presents as he can to his sled, by giving them to his elf friend, and then passing the level exit. But Santa must beware for lots of sneaky traps out in the woods, or else Christmas might never come! Let us hope Santa can return to the North Pole in time for Christmas...Description:The three of us that made this game have always loved puzzle adventure games, but it seems that lately they are just getting easier. With random NPCs always telling you what to do, and annoying endless lines of text to scroll through which basically tell you how to solve the puzzles, they just aren't the same. So our goal with Santa's Challenge was to create an older style puzzle game without all the modern conveniences, only on the DS. We tied this theme in more by trying to keep the graphics from being overly fancy and by using music with an older feel to it.Controls:The game is designed so it can easily be played by a right or left handed person. You can move Santa by pushing the directions on the directional pad or by using the 'A', 'B', 'Y', and 'X' buttons. Also, you can tap a tile and Santa will move to that square. Santa always moves in the straightest path to the tile and he will not dodge obstacles for you. If you wish to stop him from moving on the path you set you can either set a new path by tapping a different tile or pushing one of the buttons, or you can tap Santa to make him completely stop moving. A special note is that if the path you set is the same number of squares up or down as it is left or right from Santa, his first move will always be vertical.Additional controls:Sometimes you may find yourself stuck or just wanting to restart the level, in this case pressing select will restart the level. By pressing start you can access the pause menu, from here you can go to the title screen, save your progress, or return to the game. Additionally You can change the song by pressing 'L' or 'R' and if you press both at the same time the music will stop completely. To get the music back, press 'L' or 'R' again.How to Play:For the most part we want you to have to figure out the game the way it was back in the day. But we'll tell you a few important points The top screen represents your stats. The first row of numbers is how many moves you have to beat the level with, if you run out of moves you will have to start the level all over. The two empty spaces are used for holding ice skates and fire boots which allow you to walk on ice and fire respectively. The number next to the present represents how many presents you must find to beat the level, the number after the warp is the level number you are on. The number after each key tells you how many of that key you have. To beat a level you must reach the warp within the amount of moves provided. However, normally an elf will block your path. To pass the elf you must have collected the designated amount of presents. Finally, if you land on the same square with one of the Grinch's brothers they will steal your ice skates and fire boots.A special notelease keep in mind this is a puzzle game. Certain levels are designed to look impossible but every level has been tested. There is a way to beat every level if you look hard enough. Also, note that the first several levels are easy, it doesn't start getting tricky until around level ten.Final Note:We would like to thank Drunken Coders for holding this contest, without it this project probably never would have been made. 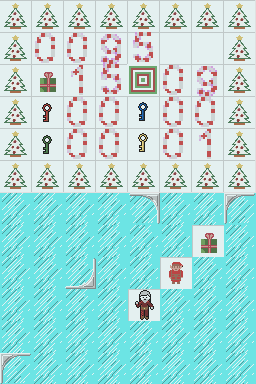 @ AncientBoi: Leave your molly brown's at the door please 7 minutes ago
Chat 2