Go to download
Overview History
A clone of Robotron / Llamatron game with 42 levels of arcade action.

The game plays fast just like the arcade game, so you need quick reflexes. Really, blink too long and your dead in the later levels.

Also you may notice the odd popular culture sprite, and the odd reference to certain sci-fi movies that only old people will know.

Place in any directory on R4, and blast away through 42 levels of non-stop action!


Most of the game is procedural generated effects, from the shock blaster, particle explosive firework effects, classic RoboTron particle explosions, custom sprite blitter routine for dynamic effects, re-usable sprites to fill the screen with particle/bullet stuff, to nice plasma score title with cycling colour effects. Why procedural effects? Because I suck as an artist and they just look cool in a simulation psychedelic sort of way.
This does push the DS to the limit, and some slow down does occur from time to time, basically the CPU has a hard time calculating the fixed point math for all the particles and objects, but it does not happen very often, or for very long. 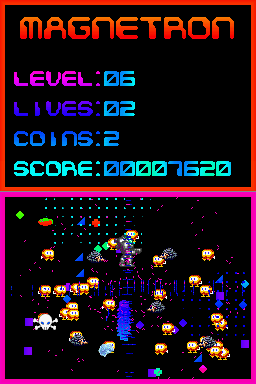