Go to download
Overview History
Gioioso! A Weird Music GameThis is my entry for the NEO summer 2006 compo.Gioioso is a musical term that means that something is played in a joyous manner. I think it fits this game's nature.Here's the storyr. Loopy Discord has invented a horrible machine that can materialize music into small living balls called the Riffballs. He calls the machine Retro Resonance. Then by accident the machine escaped from Dr. Discord and started to furiously materialize all the music in the world into cute little riffballs.But the riffballs can not live in the solid world, they can only live when they are in the form of sound waves. So all the music in the world is dying!Dr. Discord calls for you, the player, to help him save all music in the world. Riffballs can be transformed back into music by combining the same coloured riffballs together. Just drag them on top of each other with your stylus and that will generate music. The riffballs die quickly so you have to hurry. You know a riffball is dying when it turns on a sad face and starts getting darker. Touching them with stylus will make them last a bit longer.This version of the game has four survival mode levels. I didn't have time for a story mode, but it will be there in a future version. 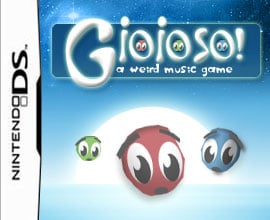