Go to download
Overview History
A RPG combat system engine for the DS. See the included "readme" for future features plannned for this game

Features:
-Attribute points to divide amongst your stats which influence your character in battle
-My take on a turn based battling system, which includes live action elements of attack and defense (thus requiring skill as well as smarts when planning attack)
-Health and Stamina bars for you and your enemy
-Quite complex AI, which allows for an unpredictable, 'smart' enemy who reacts to many gameplay elements, who can defend from your attacks, and be enraged in desparation into stronger attacks
-The engine is future-prepared for allowing modification of armor items, primary weapon and more 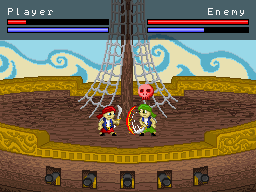