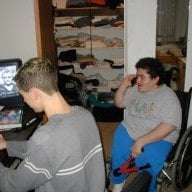 I have been successfully using a USB hard drive - connected to USB port 0 on the Wii and formatted FAT32 - to load Wii and Gamecube backups from USB Loader GX and Nintendont, respectively. All of a sudden today both GX and Nintendont are unable to see the hard drive despite it being plugged in and displaying data access via LED flashes on the drive enclosure. I confirmed that the disk is in working order by plugging it into a computer and the FAT32 partition, 'GAME1', loads just fine and all of the directory structure ('games/' for Nintendont and 'wbfs' for USB Loader) is in tact.

Nintendont displays something along the lines of 'Cannot load FAT partition' while USB Loader GX counts down 20 seconds while trying to detect a hard disk and, upon failure, displays the internally installed Wii channels in its menu.

I have not touched any IOS/cIOS loader or any thing else that would affect the functioning of USB and file access. On Friday night everything was working fine; on Saturday evening neither are loading.

[USB loader GX] I can´t run the Gamecube roms direct from HD, why?