They watch US... but who watches THEM?

So my mom decided we should go to the movies today. I went and saw "Yes, Man" and "Seven Pounds". Surprisingly, they were both pretty good! Yes, Man was funnier than I expected, although Jim Carrey gets a little annoying after a while. It's not that I don't like him, it's just that he always acts so crazy... it's like he's trying TOO hard.

Seven Pounds was just amazing. Although the first 3/4's of the movie had me in "wtf" mode, it wrapped up very nicely and explained itself. (For the most part)

Anyway, as I was leaving the theater, I decided to make a quick stop by the book store... and OMG, GUESS WHAT I FOUND:

I'm so happy! Ever since I saw the movie trailer a couple months ago, I always really wanted to read the comics... the movie looks spectacular. Also, my buddy Xcalibur (

) told me it was a really good series, so I'm glad I found this book. I think it's a compilation of all the comics into one book. They also had a huge book titled 'Watchmen: Complete'. Not sure what it was cause it was just a black casing with the smiling face, but it cost 75 bucks... so whatever it was, it must have been good.

Absolute Watchmen is something like the "Special Edition DVD with Extras" of the compiled edition. Also the colors are fuck amazing. I'm glad I has its.

Yes, that is the whole series.
It rocks

For real, especially the surprise ending.
I want the 75 buck one

Prolly has interviews and stuff.

Hm... I guess it was something like that then? Sounds awesome though. I'm reading my book right now and so far it's great.
H

Just finished my last book (Children of Dune) yesterday and started on this one today. I got this edition, as apparently it has higher quality images or whatever. Plus it's hardcover, which is nice. 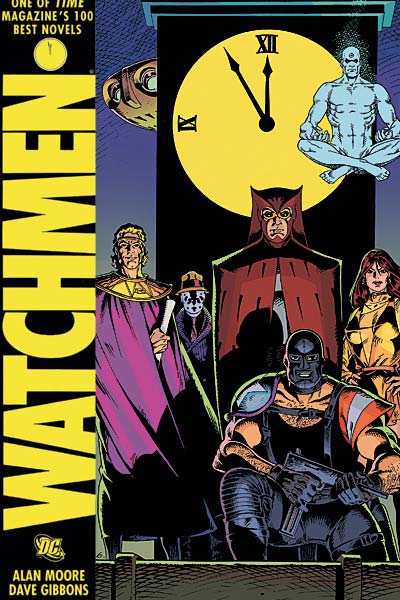 One of the greatest novels of the last century, graphic or otherwise.

I can't wait for the movie.

I read the comics some months ago, after seeing the first trailer for the movie... Just awesome.

I'm not a big western comics reader, but this one simply rocks. Highly recommended

I have the original series around here somewhere. Even my old Comedian smiley button. Movies never live up to the comics they are based on but I hope this one is different.

I really enjoyed reading this comic though I did skip the middle chapter things on my first read through because I wanted to get on with the story. The whole universe is so consistent and without plotholes that it makes it totally believable and I found the character developement impressive.

Rorshach is my favourite character and the joker somewhat enigmatic and suprisingly deep. The ending left me scratching my head for a few moments but it was completely fitting and leaves you with a lot to talk about. Fat boy had better come through with the filler content!

^^minor spoiler but you won't get it till the very last page anyway.