The_Elder_Scrolls_V_Skyrim_Legendary_Edition_PAL_XBOX360-STRANGE and State of Decay XBLA


The_Elder_Scrolls_V_Skyrim_Legendary_Edition_PAL_XBOX360-STRANGE
ABGX has this down as PAL and NA (no Japan). Better with kinect = it got some token kinect additions in an update. No great worry about it.
Two discs, looking at the other regions disc 1 is the original game (no idea what wave) and disc 2 is the extras (not sure if they can be extracted and installed or otherwise installed and left, it would not be a bad bet to assume they could be extracted/installed but it will need to be confirmed).
Basically a game of the year edition. It is Skyrim so we reckon we do not need to cover it, still Skryim is the latest in the open world fantasy RPG series known as Elder Scrolls. Quite a few people liked it, we have seen a few interesting alternatives for those that want it but the original game is fairly solid. You probably would prefer it on the PC as you get mods there and mods very much make this game series.

Amazon words
Winner of more than 200 Game of the Year awards, experience the complete Skyrim collection with The Elder Scrolls V: Skyrim Legendary Edition, including the original critically-acclaimed game, official add-ons – Dawnguard, Hearthfire, and Dragonborn – and added features like combat cameras, mounted combat, Legendary difficulty mode for hardcore players, and Legendary skills – enabling you to master every perk and level up your skills infinitely.

Live Another Life, In Another World - Play any type of character you can imagine, and do whatever you want; the freedom of choice, storytelling, and adventure of The Elder Scrolls comes to life in one legendary experience complete with added weapons, armor, spells, and shouts from all three official add-ons.

Dawnguard - The Vampire Lord Harkon has returned to power. By using the Elder Scrolls, he seeks to do the unthinkable - to end the sun itself. Will you join the ancient order of the Dawnguard and stop him? Or will you become a Vampire Lord? In Dawnguard, the ultimate choice will be yours.

Hearthfire - Purchase land and build your own home from the ground up - from a simple one-room cottage to a sprawling compound complete with an armory, alchemy laboratory, and more. Use all-new tools like the drafting table and carpenter’s workbench to turn stone, clay, and sawn logs into structures and furnishings. Even transform your house into a home by adopting children.

Dragonborn - Journey off the coast of Morrowind, to the vast island of Solstheim.Traverse the ash wastes and glacial valleys of this new land as you become more powerful with shouts that bend the will of your enemies and even tame dragons. Your fate, and the fate of Solstheim, hangs in the balance as you face off against your deadliest adversary – the first Dragonborn.


Video It is Skyrim.... there are many videos available. Might as well have the first result for Skyrim kinect, warning some somewhat annoying commentary.
Boxart. 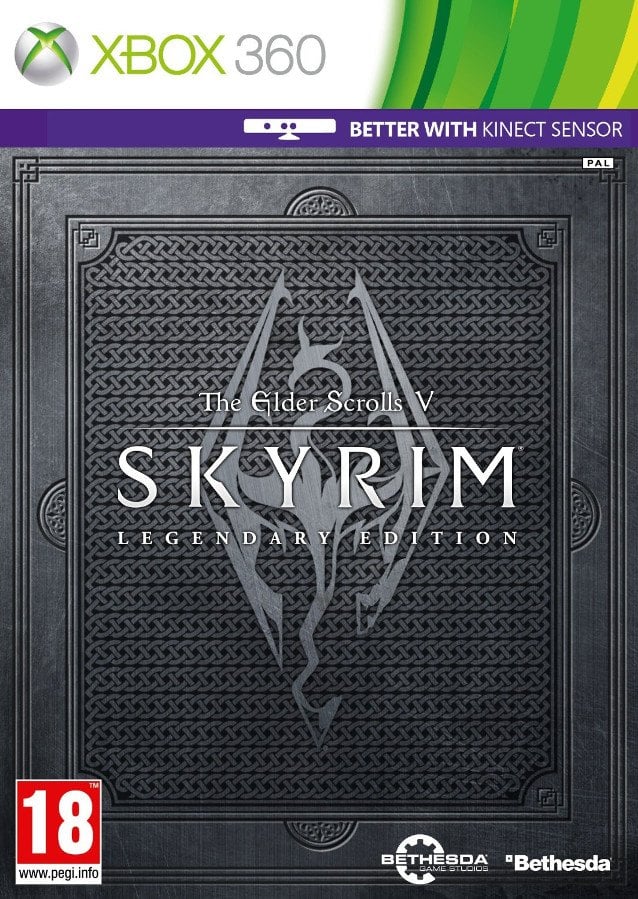 NFO
Waiting on a proper one.
Reactions: jkiller and 431unknown

the second disc has the downloadable content and it can be used without the disc.
Reactions: 431unknown

Gaming How Large is Skyrim with All DLC compared to Zelda BotW?