TheChosen said:
You don`t know how USB works, may that be? Or you simply don`t understand what i takled about. The point i talked about was the TAX of the cpu-bandwidth when you use USB. Man, please read carefully...then think...and then you can type.

I said when you poll a USB 2-bus with 10 hz, this makes (as you said) about 600 Mbytes/Second (which is equal to your mentioned 4800 Mbits). And that is the TAX on your cpu. Since the cpu of WiiU is limited to 20 Gbytes/second. And i said that`s the theoretical max bandwidth since in reality you get a few losses because of the overhead and the procotols you use and the type of stuff you want to do.

And THIS is why modern Computers/PCs can get severe mouse-stuttering, if you adjust your USB 2-mouse to a 1000 Hz or even higher polling. Because an AMD/Intel processor cannot do unlimited bandwith either.

Did you read your linked text of "rpl2elf"? No encryption can be taken out. Because your AMD/Intel cannot do magic. No such processor can decrypt such a file in...less than ~100 years gerbilsoft.

Maybe you should learn how security works? And that there isn´t just one security-type only. The WiiU doesn´t use the generic security you find in Wii or Playstation or Xbox.

It uses software-encryption with the whole OS since the claim you made also makes no sense (no ARM9-cpu supports AES, since hardware AES was implemented in...what? ARM11 earliest? lol). And i explained above how it works. And i also said WHO is responsible for this decision (clearly Reggie, since Satoru Iwata would have never done such a "develish" thing) and why you do it this way.

True/Veracrypt-security is- because you do not know how the filesystem works the most-safe security currently on earth.

and the exact same mechanism seems to be used here. and this is why i said "bruteforcing" won´t get you far here. You better don´t start it at all.
Click to expand...

You really don't know what you're talking about. No Intel/AMD CPU can decrypt an RPX executable because it is not encrypted in the first place.

ARM9 itself doesn't support AES, but Nintendo's ARM9-based IO-Processor (on both Wii and Wii U) does have a hardware AES engine:
https://wiiubrew.org/wiki/Hardware/AES_Engine

Truecrypt/Veracrypt is block device-level encryption. It works on the full block device, not individual files. I use dm-crypt/LUKS on my laptop, which is similar but implemented differently. This doesn't apply to RPX files, because RPX files aren't encrypted. Do I need to post a screenshot of the contents of an RPX file to prove that they're not encrypted?

EDIT: Attached a screenshot of a hex editor showing an RPX file. Note the plaintext strings. 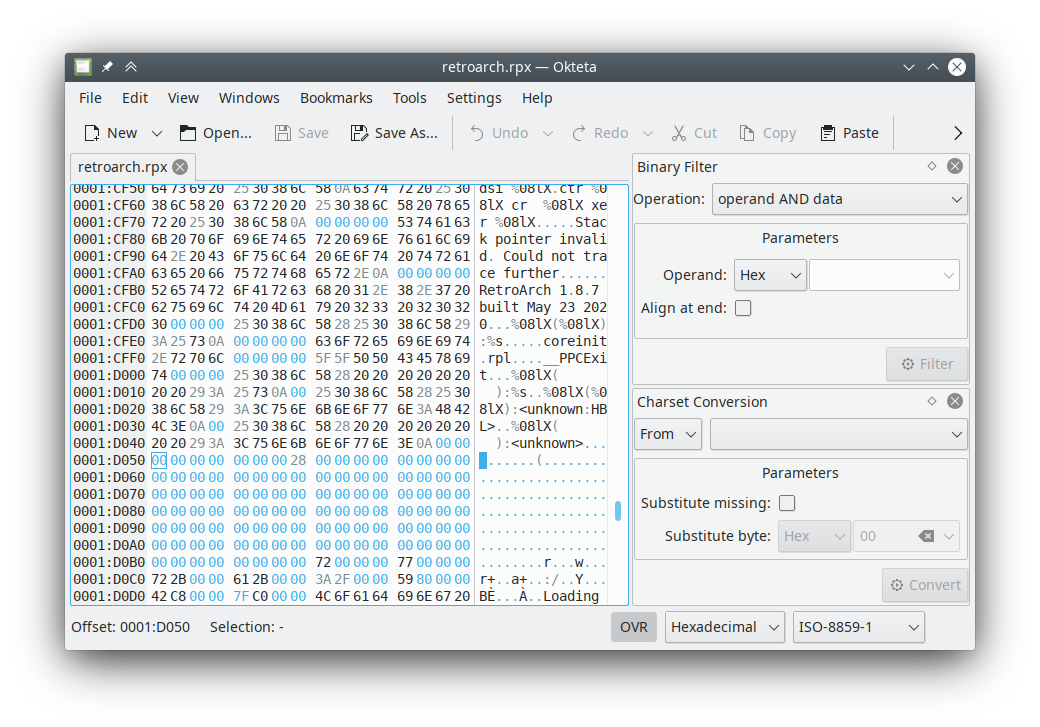 ...I'll go ahead and lock this thread so our friend TheChosen won't embarrass themselves any further with so much delusion and misinformations.
Reactions: GRAnimated, depaul, huma_dawii and 6 others

D
got a wiiu wit homebrew and im wondering

@ KennieDaMeanie: Poop getting failed to trigger this exploit on 9.0 ps4 25 minutes ago
Chat 1