When it comes to the fighting game genre, it usually brings to mind titles like Street Fighter, Tekken, or Mortal Kombat; ones that have been around for decades, cementing their place in video game history. However, there’s a fighter that’s been around for just as long, and has an equally illustrious history: The King of Fighters. After all, if something is still around after 14 entries, then they’re definitely doing something right. Though The King of Fighters franchise has been overwhelmingly more popular in eastern territories as opposed to the west, the series has found a loyal niche here, especially in recent years.

With a fifteenth installment on the way at some point, despite facing an unfortunate delay this month, SNK isn’t quite fully ready to let go of The King of Fighters XIV yet, which released all the way back in 2016. This leads us to the recently released swan-song for the game in the form of The King of Fighters XIV: Ultimate Edition. Supposedly, this is the most feature-packed entry yet, and considering that KOF XIV Ultimate boasts a roster that consists of 58 different characters, I’m inclined to believe it.
​ 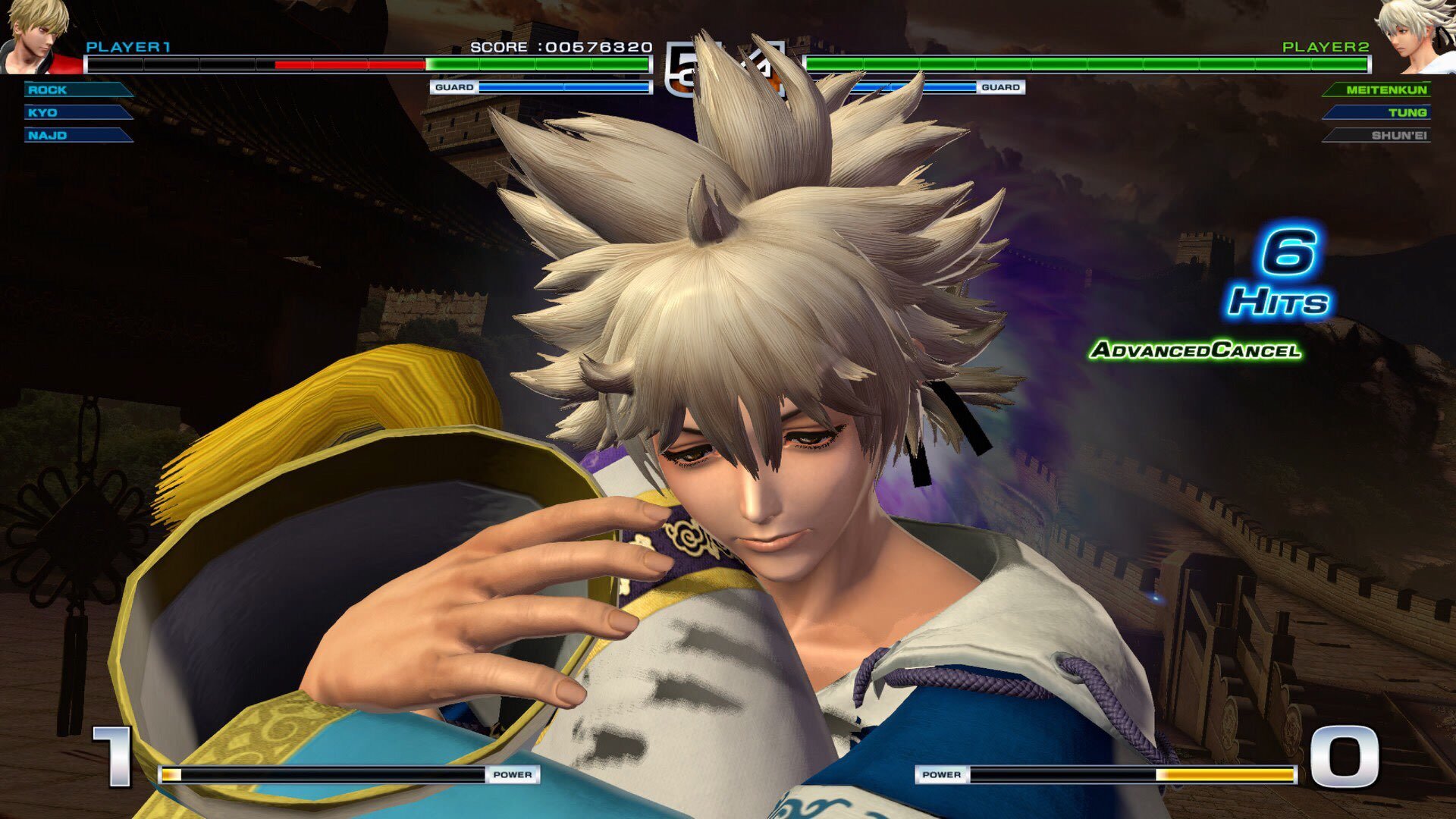 ​
2D fighting games have never been my specialty—though I do have a soft spot in my heart for some of Arc System Works’ licensed games. Outside of that, I’m fairly fresh to the world of fighters, and that was made blatantly apparently the moment I glanced at the character selection screen. There’s a veritable army of characters to choose from, each with their own moves, specials, mechanics, and intricacies. It’s absolutely staggering to consider all the different play styles, ranges, and pertinent information professional players would need to keep in mind. Fortunately, new players won’t have to be that hardcore—and the tutorial system is of immense help when it comes to learning the basics.

SNK has decades of experience creating these types of games, and it truly shows when you get into the combat. Whereas Street Fighter has you pick a single character and go toe-to-toe for a few rounds, in King of Fighters, you pick a team of three fighters. These characters can't tag in or out like how some team-based fighters work, like in Dragon Ball FighterZ, but instead act as an extended health bar, in a way. The two teams of three will duke it out until one side is out of fighters, an easy enough concept. Your health will remain constant when a new round begins, but if you managed to score a K.O., you'll gain a slight bit back. It keeps things tense without being too frenetic or hard to follow.
​ 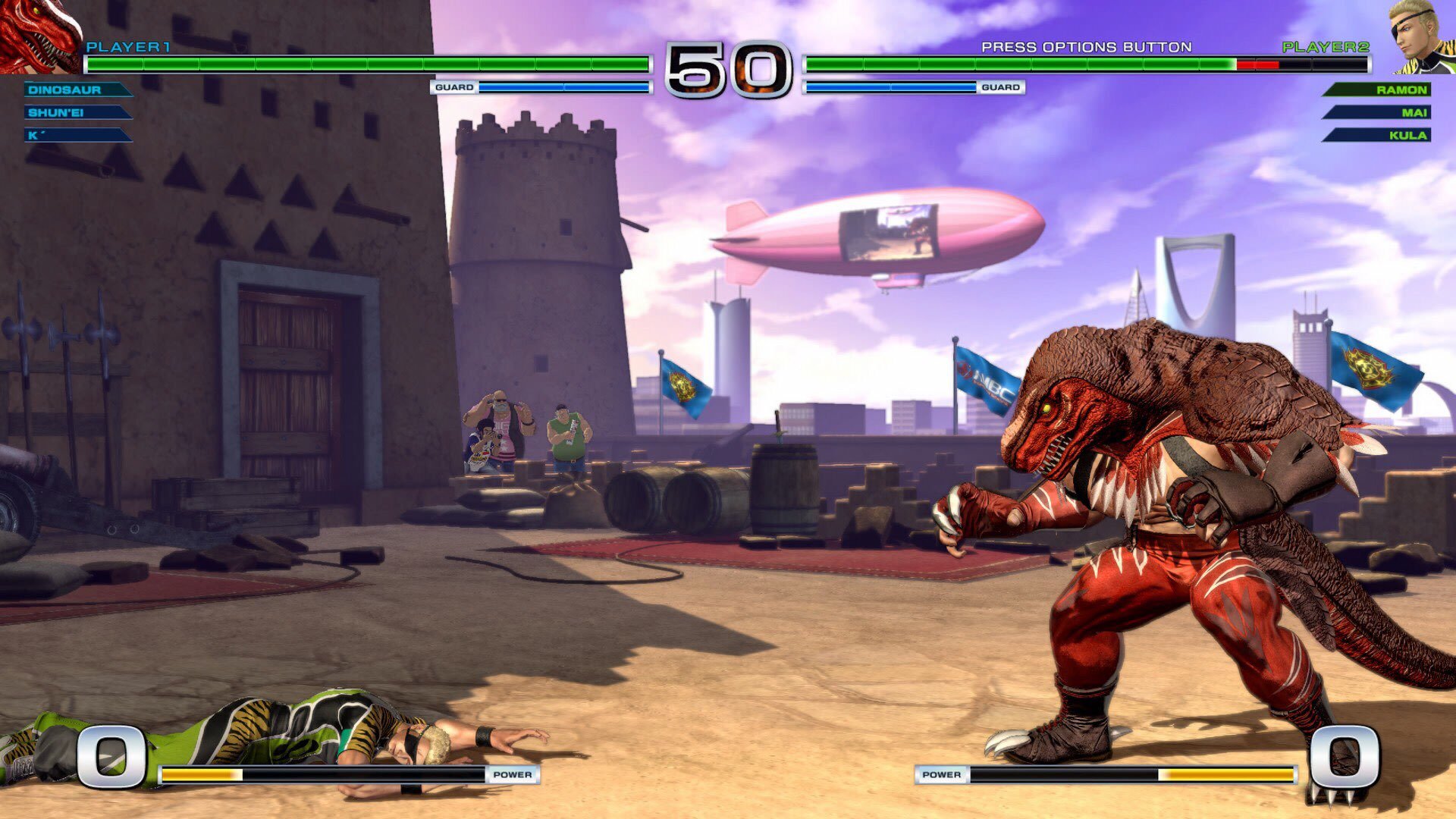 ​
For the hardcore enthusiasts out there, it's worth noting that XIV operates on a delay-based netcode, and not rollback, the latter of which being considered as far preferable for online matches. Playing the game online through wifi worked fine in my case, with no weird stutters or noticeable lag, though a more discerning veteran might find faults where I didn't.

After thirteen prior installments, KOF XIV made a very major change to the formula, by replacing the traditional 2D sprites with 3D models on a 2D plane. Visually, it feels like a downgrade, but that doesn't mean KOF XIV looks bad. It's...different, but at the same time, the characters look distinct and pop against the background, their hitboxes are precise, and the animations are all exaggerated and over the top--exactly what you'd want from a fighting game developed in Japan. Interestingly, the original release of XIV suffered from such lackluster graphics that SNK had to completely revamp them in a patch sometime after launch. The Ultimate Edition utilizes these updated visuals, and it seems that their efforts to improve the game paid off.

As previously mentioned, KOF XIV Ultimate has a roster of 58 characters--yes, that wasn't a typo--which includes the original release's cast, along with each of the DLC characters that were released later on, along with ten costumes that were also released as paid DLC. SNK also crosses over some of its cast from other fighting games it's developed in the past, including Terry Bogard from Fatal Fury--otherwise known as "that one guy from Smash Bros.". There's a lot of variety to each of the 58 characters, especially the DLC ones, which I honestly found to be surprising; it'd be easy to assume that a lot of them would feel "samey" to play as, however, the combos and differing attacks felt individually defining. 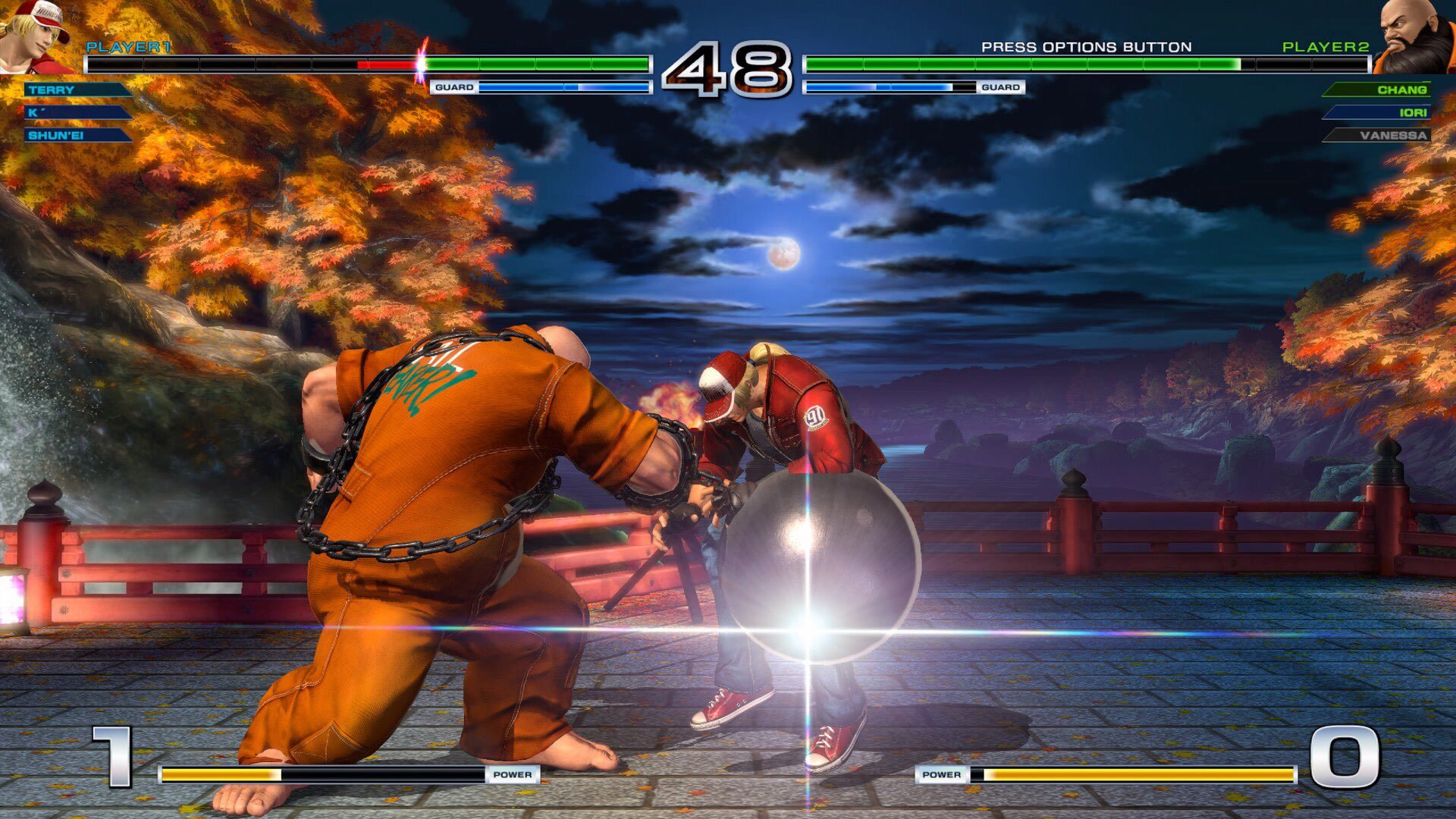 ​
While I have no prior concept as to who these characters really are, I found myself enjoying their designs and finding out their respective “gimmicks”. Kyo’s attacks have lots of high kicks and long-reaching sweeps that can catch opponents off-guard. Terry is super weighty and needs to be up close to do the most damage. One of Ramon’s moves has you hilariously parkouring onto the chest of your opponent and majestically somersaulting back to the ground. Most of the DLC cast, such as Rock or Vanessa are also really fun to play as, even if I didn’t know what I was doing half the time. The story mode will help get you acquainted with all these faces, where you go from battle to battle to become, well, the King of Fighters. It works well as a way to jump in, play a bit, learn more of the game’s systems, and take a break, as does the mission mode for when you’re a little more experienced.

And really, if you weren’t interested yet, there’s just a guy called The King of Dinosaurs, and he fights in a giant dinosaur costume. What else more do you need from a video game?

Where the game really takes things to the extreme is in its combos. Light attacks chain into heavy ones, and when your gauge is high enough, you can pull off all sorts of specials, supers, climax moves, or go into a Max Mode, where your attacks become even more damaging, flashy, and show-stopping. Once more, the tutorial is nothing short of amazing in terms of helping you know what buttons do what on screen, but KOF has so many things, it's difficult to comprehend. That's both its greatest weakness and strength.

I doubt I'll ever come close to mastering the gameplay of King of Fighters XIV, but as someone who has always wanted to experience SNK's super-influential fighter, I'm glad to have started with this game. A lot of the deeper mechanics are out of my grasp for now, but it's a blast to play casually. The Ultimate Edition is clearly an easy way of getting fans to reinvigorate the same old game that's been around for years now, but at the same time, it's a wonderful jumping-off point for newcomers, and if you're a lapsed fan, you'll have an endless amount of catching up to do when it comes to trying out all the new fighters you might have missed in the past. Less octane-fueled that Arc System Works' games, but more exotic than your run-of-the-mill everyday Street Fighter, King of Fighters XIV: Ultimate Edition is an easy recommendation to anyone interested in 2D fighting games.