Gaming The Interview With The Tales Of Innocence Translation Creator THROUGHH 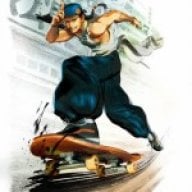 1.How long have you been a fan of Bandai Namco's Tales Of Series?
Throughhim413:Since Tales of Symphonia.

2.What do you like about the Tales Of Series?
Throughhim413:The battle systems and the characters. And the cliches.

3Was This Your 1st Project in Translating a full Japanese game? And what if not what full translated games have you done and how long have you been translating Japanese games
Throughhim413: No. I did a retranslation of Symphony of the Night and a translation of Tales of Phantasia. I've been doing it for a few years now. Since 2007, I believe.

4.What programs have you been using to translate one of the best JRPGs that most likely never see the light of day from bandai namco in america?
Throughhim413:I don't handle the hacking, so I can't give you an answer. However, I can say that hacking really isn't about using programs like a lot of people seem to believe.

5.What do u like about Tales Of Innocence?
Throughhim413:I like the characters - both the party members and the villains. All the personalities in the game are very different and that makes it fun for me to translate. Even many of the story NPCs are amusing in their own ways.

6.Whats Your Favorite Tales Of Character?
Throughhim413:Jade from Tales of the Abyss comes to mind. Hasta from Tales of Innocence is great. I like most of the cast members from Tales of Destiny and Tales of Hearts, but I'd have a hard time choosing just one.

7.how many years have you been working on Tales of Innocence?
Throughhim413:A year and a few months.

8.hmm whats your goal for the translation to be completed?
Throughhim413:No comment.

9 do u think that this will be your best work completed?
Throughhim413:Yes, I do.

10.Will there be any translation Projects after this one on any other Tales Of Series Game?
Throughhim413:Right now I'm focused on Tales of Innocence. I'll deal with what comes next when I'm done.

Nintendo Switch Dec 26, 2022
Something whatever

'New Tales from the Borderlands' to launch in October

@ Psionic Roshambo: Or a chameleon lol A moment ago
Chat 3