Homebrew Something I immediately noticed about GBA emulation on DSi TWiLightMenu...

Like, a decade ago I bought a Supercard DSTWO when my main handheld was still my DSi, and I used the crap out of it. But I remember buying it specifically to see if the GBA emulator would work. It did, but in my opinion, it ran horribly; the framerate was low, the sound was choppy and gross, overall I didn't think it was good.

Fast forward 10 years later, I just dug up my DSi and learned that I can mod it now thanks to TWiLightMenu, among other things. It took about an hour but when I was done, I was curious about how well my GBA ROMs would run on it, to which, lo and behold, I was pleasantly surprised to find out the framerate is pretty smooth, actually accurate to the original experience. Admittedly the sound isn't perfect but I found it better than it was on the Supercard DSTWO.

The reason I'm making this thread is because I'm actually curious as to why that is. The Supercard's GBA emulation was very subpar whereas this GBARunner tool is almost perfect.

The main reason is that the DSTWO had a GBA emulator where GBARunner2 is a hypervisor. What this means is that with GBARunner2 some things are run natively (namely the graphics and I think to some degree CPU instructions) and only some is actually emulated (sound and basically everything else), which cuts out a lot of the overhead of full emulation.

Also about the sound, fyi if you didn't install Unlaunch the sound is quite a bit better if you install Unlaunch and run TWiLight from there since GBARunner2 is able to use the DSi's DSP, where access to that is blocked in Memory Pit and other DSiWarehax. It's still not perfect though as that is one of the emulated areas.
Reactions: Zense, banjo2, alternateshadow3 and 1 other person
A

Ooooookay that makes sense. That was definitely interesting. The reason I modded my DSi is because I like the size of it. Much more portable.

Also yeah I did everything from TWiLightMenu to Unlaunch to HiyaCFW. I'll try that though, that may explain some things.
Reactions: banjo2, RocketRobz and Pk11 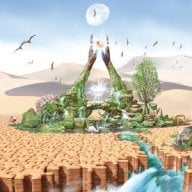 I left my DSTWO in a drawer for many years. Like you said, it drains too much power and the GBA emulator can only do so much.