Gaming So new to the Wii scene and what not 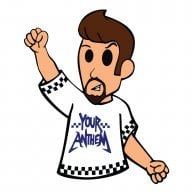 Again I have a similar post to my DS post lol. I been out of it for quite some times when it comes to next gen systems, and I have ADD real bad lol. So I wanna lets say start with 5 must play Wii games and go from there. Which 5 should I own and play NOW? lol. I am still getting use to the Wiimote etc, ive been a old schooler when it comes to 2d Platformers and have already been playing the new donkey kong and Mario.... so suggestions?

And if you by chance like football, definitely try Pro Evolution Soccer 2011.


-New Super Mario Bros wii ("the new Mario" actually refers to Galaxy 2 nowadays...or even sports mix. sorry if you already have this one)
-Muramasa: the demon blade. Lots of hack 'n slash with a more-than-average RPG element, but quite satisfying. and beautifull.
-wario land: the shake dimension. Perhaps a bit short, but it has lots of hidden stuff.
-Kirby's epic yarn. Except if you want a challenge, as this game is fun but waaaaay to easy (though honestly: I think you could actually pick up chicks with the line "hey darling...you wanna play co-op Kirby's epic yarn with me?").
-Super Smash bros brawl (yeah, yeah...lots of fighting...but the subspace emissionary is far more than a minigame-addition).


For runner-up, I'd say Super paper mario. It's fun and creative, but that paper mario thing never got the same smile on my face as a "real" platformer.


Outisde the classic platformers, I'd go with Zelda, Okami or Super Mario galaxy (1 or 2). For on-rails shooters, I prefer sin & punishment 2 over house of the dead overkill, but that's mostly on preference (HotD is more grindhouse, S&P2 is more bullet-hell).

If you have more than 1 wiimote, New super mario bros or mario kart wii becomes exponentially better.
B

For having fun with the Wiimote i would suggest WarioWare: Smooth Moves. It's a collection of fast and funny microgames.

If you are looking for some over the top racing Excitebots is a good choice.

For not so serious brain training, which is actually quite fun to compete with friends, there is Big Brain Academy: Wii Degree.

Relaxing and chilling with some funky music as you jump around giving colour back to the world, there are the De Blop games.

A party game which uses the Wiimote well is Boom Blox Smash Party.

There are some choices, but the ones I have really played most are Mariokart, SSBB, both Galaxys, New Super Mario Bros and the mods of it, both Resident Evil Chronicles and Fire Emblem.

Nintendo Switch Monday at 1:37 AM
slaphappygamer