This is my first post, which I tried to do using the ASK! link and selecting Nintendo Wii Gaming, but once I go there, the "Ask a Question" link goes away. I'm guessing I need to do something first, perhaps this "introduce yourself" link. So here goes my introduction and question.

I have an original Wii console and my grandson (age 5, yeah, I'm kind of old) loves playing the Disney Pixar Cars game my daughter bought at a garage sale. (All I know is how to play the Wii Sports games.) He's pretty adept at picking things up and knows all kinds of tricks and shortcuts and various options. When I watch him play, he has his own profile and I see him selecting "save" on numerous occasions after accomplishing some task. Then he excitedly shows me "new" options to select cars for races or paint jobs for the cars or unlocked races, etc.

But when he comes back to my house to play, he has to start over. What is he doing wrong or what step is he missing to actually save the data. I noticed for the first time ever (and I've had this game for years) that there is a place to put an SD card in the console. Will that permanently save his status or is there something else he needs to do?

Any help would be greatly appreciated by all of us in the family who watches his frustration each time he comes over to play.

How does he launch his game from the wii (DVD or USB media) ??
Reactions: Alexander1970

Hello Mister @rickster213
First of all, huge congratulations for being a cool grandpa. I'm sure you're having lots of fun when you watch your grandson being happy with videogames.
Second of all... age is a state of mind.

Now onto the matter.
The Wii has internal storage for saving WADS (Channels/Games that once you could buy on the WiiShop Channel - RIP) and other stuff like Paid Content called DLC and Save Data.

First when you turn on your Wii Console, using the WiiMote, go to the lower left corner and click on the Tool Icon / Wii Icon (sorry, can't remember what's depicted as options as the last time I've seen the Home Menu was literally years ago)
Then, go to:
Data Management
Save Data
Wii

And that should bring a screen that looks like this: 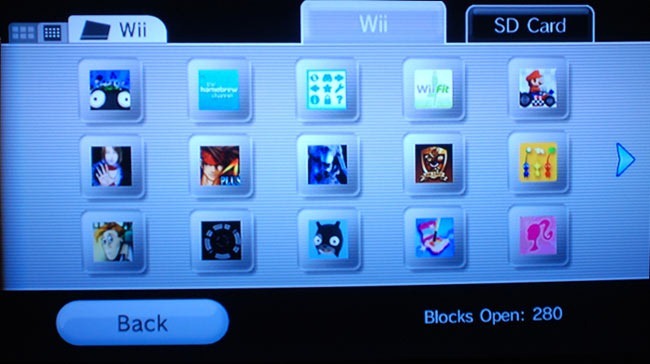 There should be an Icon containing your CARS Save Data.


If the only thing you're seeing are just blank / empty squares, it could mean three things:

If the case is the first one: Just change the game or try with other Wii games and see if those are saving properly. If not...
Then I'd guess that's the battery's fault (look on the right side of your console, and you'll notice a tiny lid with a phillips screw on it)
Removing that screw and the cover, should reveal a battery that resembles a clock battery. If there's non, your Wii is obviously not saving. If there's one, then it's probably too old to save properly.

The second point is a bit more technical and it's assuming that you have your console hacked. To know if it's hacked or not, there should be a channel called Homebrew Channel (with a proper save file on the Save Data screen) or it should do some fun and waky stuff while turning on.
Let's skip this conclusion for now, and just focus on trying different games or checking for the battery.


BTW: The SD Card is there to either store save files, or channels, but it's not an automatized process.
You have to literally choose to export your save files or channels onto your SD using the Settings Menu.
Last edited by JuanMena, Sep 29, 2020
Reactions: Alexander1970 and jeannotte

@ KennieDaMeanie: Pokémon still acts the same just feels like they tried making it into a werid anime instead of... 58 minutes ago
Chat 0