Hacking rrod on my new board

ok everything seemed ok, but then i felt at the back of the console and it seemed a little hot i have it out in the open so it's got plenty of vent, but i don't know if those crappy fans that are inside are working? i ended up getting two red lights on the left hand side so i quickly turned it off, i have tried it since then and it seems ok, but i am guessing that when it gets hot again around the back it will do it again, does anybody know a good cheap place to get better fans to replace those crappy one's that microsoft put in?
this is a xenon board, i fitted it a few weeks ago and flashed my hitachi drive and got my games backed up
i just really think it's those fans inside.

You could hook your fans up to 7v/12v directly.
You could also make a hole in the side and mount a 60MM there and hook it up to 12v.

It'll be loud but it'll carry away any heat ;]

The Talismoon fans are supposedly better than stock and quieter as well, though I can not vouch for this. I haven't been able to bring myself to drop $25 on a new fan for any of my 360s, but maybe you could.

Amazon is one of many places that sell them; check eBay and Xconsoles as well. Also, make sure you're getting the right connector; 3 pin or 4 pin.

Talismoon fans are...
Pretty much only good for the fancy LEDS
It cools equally to the stock fans.
So you're really looking at a fan mod if you want to keep it cool ;p

However I do remember something with them having a switch that lets them spin harder..
M

the mod looks like it could be hard to do? i wish i could just buy a better fan to put in, but i think the mesh inside does need to be cut out some, i really don't like how it is to concealed, i have another case and another fan here somewhere. i might check those fans out, if all else fails then i guess i will have no choice but to try and mod it. have you got your's modded with a fan like that? and how hard was it to solder the points? i have some experince in soldering, i used to solder circuits boards for air bag control units, but i'm a little rusty, it's been a while.

It shouldn't be that hard to achieve.
Yep, I soldered a 40 MM fan to the 2nd heatsink of me Falcon RGH.
It really dropped the temperatures.
M

cool, could you post a pic and how you did that?, i took the xbox apart and ran it with the cover off for a short while and it seemed ok, the fan was spinning so i know that works, then i put the top cover back on and let my daughter play it and i checked on her a few minutes later, the fan started spinning up faster and i felt the back and it was getting hotter then the fans span even faster and then the two red lights.
so i am left scratching my head?

Well, if you're handy with a few tools and a steady hand, you could always try cleaning off the old thermal paste from the CPU and GPU and applying new paste, like Arctic Silver 5; it's on the pricier side, but it is VERY effective provided you apply it correctly (a little goes a LONG way).

Cleaned the inside out? Any dust in it?

Do you have a Zephyr styled GPU heatsink (one with a copper heatpipe?)
M

yep the copper heatpipe, it always looks to me to be incomplete for some reason lol, i used arctic silver 5 on the cpu and gpu.

Have you got a picture of it?

I can't find a pic of me having it installed (cba to crack that thing open atm ;p)
But if you really want me to post a pic of how I installed it then I'll crack it open and show you ;]
M

don't have a pic, but it's the one which is taller with the pipe running thru the middle like a U shape

That's the CPU cooler silly ;p
The GPU cooler is the flat one underneath the DVD drive~
M

no mine does not look like that on the left, but i have seen them for sale on ebay, do you think i should get one like that?

Well, extra cooling never hurts, that's for sure. However, and I'll let Dinoh correct me on this if I am wrong, but I have read that the GPU doesn't have the thermal register in it; the CPU does. Thus, the GPU getting too hot isn't going to cause it to display the two left lights (overheat code), meaning your problem lies within the cooling system for the CPU. Granted, better cooling of the GPU leads to a longer lasting system.

Not to doubt your skills, but since I don't know how proficient you are in the area - how much paste did you apply? I'll admit when I first pasted my desktop CPU I kinda slathered it on... little did I know you're just supposed to do a tiny drop in the center and let the pressure of the heatsink spread it out. I've never had a system that I pasted that way over heat on me again.

Aye.
Yer I should get one
Install it and mount a fan on it~
Also, cut a small hole in the side of the case in front of the CPU cooler and install a fangrill there like I did. 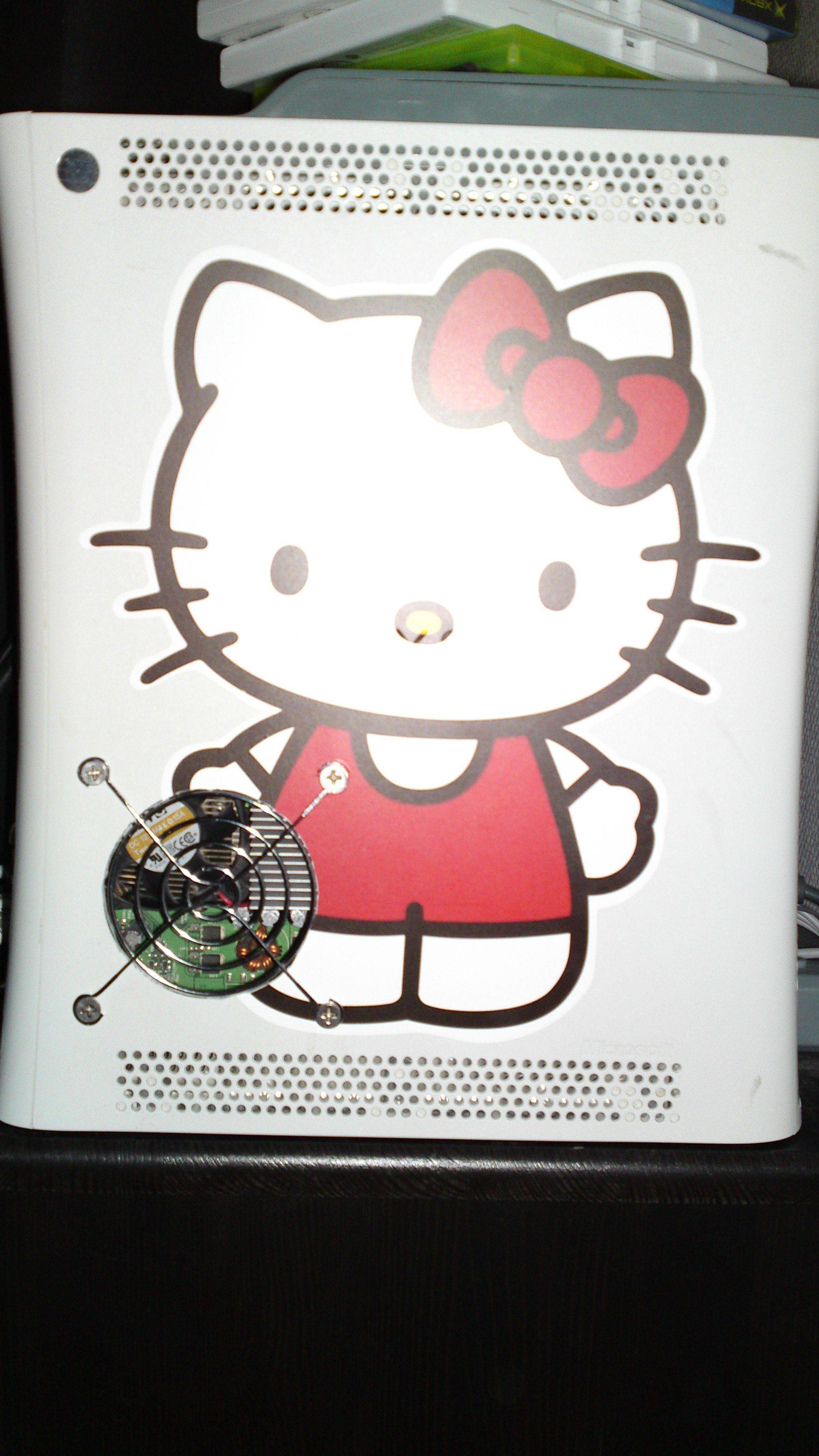 i used just a small amount, maybe the size of piece of rice, but i spread it out myself, do you think i should clean it off and just put a dab on again and just sit the heatsink on it and do like you said and let the heatsink spread it?

Sicklyboy said:
Well, extra cooling never hurts, that's for sure. However, and I'll let Dinoh correct me on this if I am wrong, but I have read that the GPU doesn't have the thermal register in it; the CPU does. Thus, the GPU getting too hot isn't going to cause it to display the two left lights (overheat code), meaning your problem lies within the cooling system for the CPU. Granted, better cooling of the GPU leads to a longer lasting system.
Click to expand...


Stock 2LOD is registered on the CPU (stupid Microderp >_>)
And Thermal shutdown is regulated on when the GPU/CPU reach a certain temperature (100+ for Xenons) MS claims.
But the CPU and GPU and RAM have thermal sensors that can display the current temperature of the chip (hence FSD utilizes it)
Reactions: Sicklyboy

Fried my SNES, what now?

Hardware [QUESTION] Is anybody else experiencing loud fans with the old switch model while docked?