OP
i've had this xbox 360 E sitting around for literal months because i haven't been able to source 2 very important parts for it, and even adapters are hard to find

- is the whole hard drive situation still basically impossible to do on the 360 or have there been breakthroughs to use any drive i want? i've got a ton of SSDs sitting around that i could just throw in, but if that still isn't an option for unmodded systems i'll stick to a usb drive
- this xbox 360 E is missing some of it's shell, and i can't find any replacement parts for it, i basically just need a replacement top and bottom for it
- the power cable is basically impossible to find, my current cheapest option would be to find an xbox 360 S to E barrel adapter, but all i can find are original brick to E adapters, which isn't useful to me at all since i don't have an original brick sitting around, and it'd cost just as much as buying a shady third party replacement power supply anyway, and since i'm on a very restrictive budget, isn't really that big of an option, even the shady unofficial ones go for like $70 in my country which is far too expensive for my budget

these are all i can find when it comes to just connector adapters, which definitely won't work in an E, and definitely can't be powered from an S 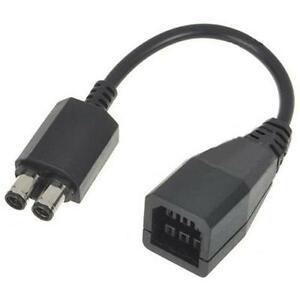 essentially, i've had this system for months and literally haven't been able to test if it works apart from the hard drive because i can't find a power cable for it ANYWHERE
Last edited by , Apr 4, 2021

DinohScene said:
1. only for RGH/JTAG
2. Ebay?
3. Ehhh you could mod a ATX PSU to power 360's, tho I'd honestly say get a PSU and a converter if that's cheap enough.
Click to expand...

alright so USB it is

and i already have an xbox 360 slim PSU, i just can't find any adapters to be able to use that psu, everything's just for the older bricks, and since i still actually use my slim, i'd rather not butcher the cable and do solder jobs with it

To bad the redesigned Slims don't suffer from RROD, otherwise it'd be as simple as getting a broken one and swap parts.

Quickly checked online and they have Phat PSU's to E Slim pin adapters but no Slim to E Slim, pity.
Tbf I don't think I've ever seen a Slim to E Slim adapter tho.
D

well, if there's no simple solution for now i guess i just gotta wait until i can pony up the cash for one of those overpriced third party solution then, rip

RIP indeed.
See if one of your mates has a E Slim and ask for their PSU for a few days? ;p
D

OP
i don't have any friends, let alone one that even has an xbox 360 lol