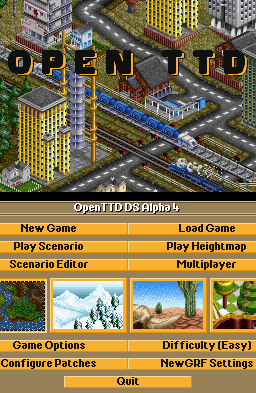 A new alpha of dominik81's DS port of the open source clone of Transport Tycoon. New in this release is stereo sound effects, configuration options are now saved to the cart, and screenshots are now working. Full changelog and download below.

* based on r12083
* Major new feature: stereo sounds effects!
Sounds require additional memory. Currently up to 200KB might be used for the sound samples. Therefore crashes due to memory shortage (especially on bigger maps) could be more frequent.
Music is still not working due to the lack of a ARM7 midi library
* sounds are also played for tiles on the border of the screen
* config options and patch settings are now saved
* more comprehensible error messages when files from the original game are missing
* screenshots in BMP format are working (normal and giant)
(the debug console won't be drawn onto a screenshot)
* added a loading screen and a an exit screen
* code cleanup to fit OpenTTD project structure

Thanks for the heads up