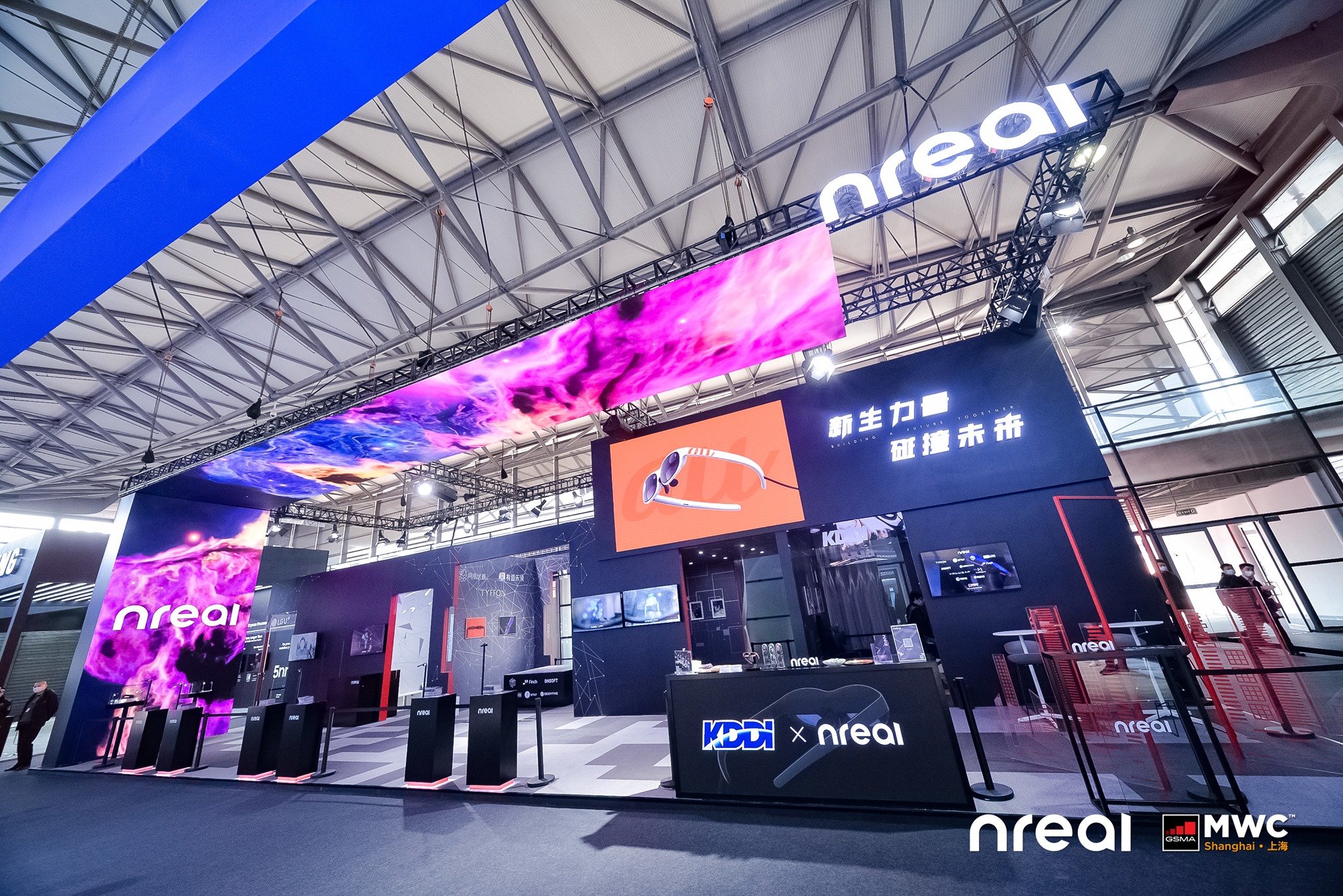 ​
Yesterday, during its presentation for this year's Mobile World Congress (MWC) Shanghai, mixed reality start-up Nreal made a couple of new announcements regarding the expansion of its hardware and software catalogue. As I noted in my impression of their first consumer headset, the Nreal Light, first-party MR games were rather lacking. But the company aims to change that as it revealed a two new dedicated games for the system. DUNKAAR is a basketball game where players shoot and dunk virtual basketballs that materialize in their environment. Then there's Dragon Awakening which the company describes as a "semi-turn based heroic fantasy MMORPG fantasy game". In it, players not only level up armor and skills of their heroes but also that of dragons they collect which they can pit against other players. You can catch a glimpse of how these new games will playout on these MR glasses in the new trailer below:


Nreal also announced two other in-house apps namely Tagesschau 2025 and Magenta Sports AR. Tagesschau 2025 is being called as "an intimate take on a weather app" where you get your own personal holographic weather anchor. Magenta Sports AR is a live, on-demand sports streaming app where you can even watch live football matches in a 3D space to follow the players along the pitch as they play in real-time while you are in your living room.

On the hardware side, Nreal announced its partnership with Finch Technology to pair the latter's new FinchRing with the MR headset. The FinchRing is a hands-free six degree of freedom (6DoF) mixed reality controller allowing Nreal Light users to interact with 360-degree spatial tracking in any environment. It essentially takes away the need to use your phone as a controller, which can get tiring after extended use as I pointed out in my impression. The FinchRing could make for a more immersive experience with the Nreal Light.


During the event, Nreal also unveiled a new business line of hardware which is a direct competitor to the Microsoft HoloLens and Magic Leap (the Nreal Light in comparison is targeted to general consumers). Their enterprise MR headset, the Nreal Enterprise Edition, features a wrap-around halo design and a balanced fit from front-to-back. It is said to be "lightweight and compact" but exact specifications are not available. It also allows users to control the headset through eye-tracking and gesture recognition technologies. The Nreal Enterprise Edition is slated to release later in 2021.


Nreal says that its launch in South Korea was a "commercial success", with users spending an average of 49 minutes per day on Nreal Light while the top 20% of users spend an average of 120 minutes per day. Their smart glasses was also launched in Japan last year and in a bid to accelerate global reach, the Nreal Light will also be available in Western markets in 2021. The MR smart glasses will launch in the EU via a partnership with carriers and it will be available on the US market in Q2 2021. Previously, Vodafone said that it will first launch the device in Germany and Spain during Spring 2021.

"Mixed Reality is emerging as a transformative technology that is already seeing high rates of engagement perspective and incrementally changing how we interact with our mobile devices, from watching films on a digital IMAX-size screen, or collaborating with colleagues from one’s bedroom," said Chi Xu, CEO and Founder at Nreal. "With the initial success we've seen with our carrier partners, we're scaling this strategy and excited to get Nreal Light into the hands of American consumers by April of this year."

To have an idea as to what to expect out of these mixed reality smart glasses before they are available in Western markets, be sure to check out our official impression of the Nreal Light published earlier this week!

Are they in the stock market?

Shalashaska98 said:
Are they in the stock market?
Click to expand...

we've been promised stuff like that so many times and it either never happened or didn't live up to the expectations, that i no longer believe this until it's a real product and there's people out there playing it.
Reactions: Julie_Pilgrim

placebo_yue said:
we've been promised stuff like that so many times and it either never happened or didn't live up to the expectations, that i no longer believe this until it's a real product and there's people out there playing it.
Click to expand...

I released my hands-on impression of the consumer product a couple of days ago. You can read it here (also linked in the article).
Reactions: greasehoot and Julie_Pilgrim

Prans said:
I released my hands-on impression of the consumer product a couple of days ago. You can read it here (also linked in the article).
Click to expand...

looks promising, i won't hold my breath, but they seem like they might deliver. It's about time AR gets mainstream and useful
Reactions: Prans and Julie_Pilgrim

Yeah I guess some good came out of 'The Great Firewall'/China blocking Facebook
Reactions: yoyoyo69

Darn it, thanks for checking

Shalashaska98 said:
Darn it, thanks for checking
Click to expand...

no prob, i checked the market as soon in saw the topic.
Reactions: HideoKojima

The weather app is like being in the future. I'd actually like to see it in action.
The games are only for a quick buck, as I'm sure they are aiming towards enterprises.

leon315 said:
no prob, i checked the market as soon in saw the topic.
Click to expand...

Nreal Light AR glasses launches in retail in the U.S. later this month

@ NeoGaming: A moment ago
Chat 4