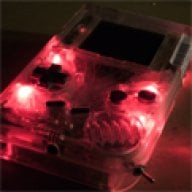 As many people here might know, EZ Flash Jr doesn't work well with SGB. While we're waiting for an official solution from EZ Flash Team, I've developed my own, basically software only, solution for it. It's a modified version of the EZ Flash Jr kernel 1.04e. This is beta software, and I would appreciate feedback from anyone interested in using it, especially on a NTSC SNES or on a SGB2.

FAQ:
What was the problem and how does the SGB Enabler work?
The SGB contains a full Gameboy CPU and the SNES is used to show the graphics and sound from the Gameboy. But before the SNES allows an image to be shown, it needs a message from the Gameboy to validate the cartridge. Unfortunately, EZ Flash Jr holds the CPU in reset (basically locks it up) while it’s loading its own firmware. Because of this, the timing is thrown off. The SNES never gets the message and only shows a black screen forever.

But the Gameboy CPU is still running in the background. The SGB Enabler sends the same commands as the Gameboy boot ROM would normally send, and the SNES allows an an image to be shown.

How do you use the SGB Enabler?
Simply copy the included ezgb.dat file to the root of the SD card, overwriting the existing file. Then start the Super Gameboy. (download link at the bottom of the page.) You do not need to touch the reset button on either the cartridge or SNES. It just works.

Does the SGB Enabler restore all SGB functions?
Yes, it enables the game to use colorization and border graphics, and even special sound effects in the few games that use those. And Space Invaders 94’s SNES arcade mode works as well.

Is the SGB Enabler safe to use?
Yes. The SGB Enabler only modifies the kernel (menu), and doesn’t touch the firmware (FPGA). Therefore, you can simply restore it to its original state by copying the original ezgb.dat file from EZ Flash Team onto the SD card, and there’s no risk of bricking. You do not need to upgrade to FW5 (which Team EZ Flash removed). It’s recommended to use FW4.

Can I still use the SGB Enabler on a DMG/GBC?
Yes, the only downside is that the boot time is longer because it always tries to send the commands to wake up the SGB as explained above. I will try to figure out a way to fix this later, but this is just an early beta version to get feedback from users. If this is a problem, simply replace ezgb.dat with the original file from EZ Flash. (Detecting the hardware is not as straightforward as it seems because the EZ Flash Jr has an internal boot ROM that erases the initial registers that programmers normally use to detect which type of hardware the game is running on.)

The SNES reset button doesn’t work!
Please use the reset button on the cartridge, or power cycle the SNES to restart.

No SGB here but very nice to see.

Equally for my money Bomberman SGB ranks right up there in terms of best classic multiplayer bomberman -- I was never a great fan of the kitchen sink approach of later games so if you are thinking PCE/TG16 (the best of the 16 bit efforts, though the others are no slouch), Saturn or maybe the Bomberman Live thing then I put it up there with those. On the other hand I am also a fan of bother Bomberman 64 and Atomic Bomberman so maybe don't take my word on things here.

C
Emulation I am having a problem with the EZ Flash Jr with the DMG GameBoy.

Hacking EZ-Fash Jr. - My opinion after one year.

View top chatters
Open in popup
B @ brskhy: nah fam its more about the nds cheat databases A moment ago
Chat 2