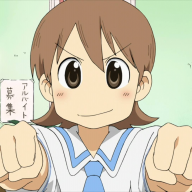 Hi, I'm part of an ongoing project trying to translate Nichijou Uchuujin and need some help with the project as the project is mostly at a standstill and am somewhat at a loss for how to proceed with it, mainly with the tech / ROM hacking side of things. The project has been around since around 2018 and has gotten a good amount of the game translated, about 50% to 70% (hard to gauge for sure) and still have some people working at it occasionally, organized on our Discord server. We have a half-baked patch that was worked on previously to get English hacked into the game, but hasn't been worked on in years and is way over my head to work on myself, even after many long nights of tinkering with the PPSSPP disassembler and various other tools to deal with parts of the game, with not much success.

Writing this thread mainly to ask for help on getting some help or at least some guidance on how to keep this project going (and hopefully finished sometime). If anyone with the knowledge is willing to help with hacking English into the game, that would be a massive help!

We also need some help with translating the game from Japanese as well. I help host the website where most of the translation work takes place, so that people can easily work with the game's text without having to deal with any setup. That's linked in the Discord as well.

Any other advice would be appreciated! Thanks!
Reactions: Gil_Unx and Malckyor

Sony PSP Yesterday at 10:55 AM
AllanFF
A
J
Trails in the Sky 3rd English Patch