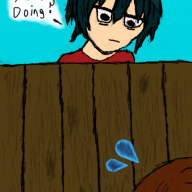 I got this DS lite as "for parts". I opened it up and noticed one of the surface mount components had been broken off. If someone could help me identify what goes in this gap here, that would be awesome

Pulled apart one of mine.
Another brown band device, no markings, no markings on that side of the PCB either for a clue (other side has nothing either and these appear to be directly under other devices).
However the three leg devices they are connected to and share a common rail from have the same markings.
Brown bands are sometimes capacitors, sometimes ferrite beads. Both I might expect to see leading to a pin like that.
If you wanted to test the other brown band device next to it* then reasonable bet it will do for replacement (or bypass**) there.

*doing it in circuit is tricky, some will remove the whole thing, others will remove just one leg.
Your meter will likely have a capacitance reader. You can go for that and try to match the capacity from the standard range if you like.
If it is a ferrite bead then it will be an inductor. You can try to figure out how many henries if you want but resistance will tell you it is one (inductors tend to be there to get rid of high frequency noise).

**bridging the joint might get it sorted -- any inductor or capacitor that size is mostly there for minor noise filtering rather than doing something to ensure a stable supply like their bigger brethren so play that as you will. Some would opt to instead take the leg from the three pin device side with its intact device and put a bridge across into the other side, effectively doubling things up for a single capacitor/bead.

If you are replacing properly I don't know if there are any redundant ones on the DS lite board you can try against for test or longer term purposes
You will probably end up going to an electronics vendor for this if you do want such things (I have never seen this break or be broken on a DS lite board before so doubt there are kits online) which can be pricey.
Short version if you will be offered three options there
1) Reel. Designed for a machine to place them when making boards with a pick and place machine.
2) Reel with less on it. Same as above but less of them, mostly there for when you don't need 3000 extra chips when the base cost is $3 a pop.
3) Cut tape aka CT. Someone takes the reel, slices off a length of the tape that makes them up and sells that to you.

If there is a local school or electronics repair facility you might be able to buy something from them (capacitors and ferrites are fairly common items to stock), or tack onto their order (they probably do orders every week).

Pro tip. Buy more than you need -- you don't want to repeat the buying exercise because you sneezed or it fell on the carpet. Such things will be fractions of a cent anyway and the you might even face minimums/find shipping the bulk of the cost.
Reactions: MrMcTiller

@ Psionic Roshambo: Furry Friendly Recipes or How to Cook With your Friend! 15 minutes ago
Chat 2