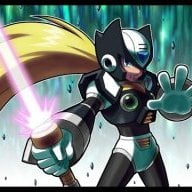 Hello there you all,

i finally got to play Metroid Dread and beat it today. Before i even tried it i read many Reviews. The consensus seemed to be the game was underwhelming to say the least. Constantly comparing it to Hollow Knight or Ori or something. But since im a Huge Metroid fan i though oh fuck it i still wanna play it. Before i wanna go further i wanna say im generally a huge Metroidvania fan. Played many Castlevania games, some other games i would describe as Metroidvania including Hollow Knight and Ori. Also i played every Metroid game exept Hunters. Ok i didnt play the NES game on a NES but on the GBA. The Version you unlock after beating Metroid Zero Mission. But it still counts i think. So now i Really like the Metroid games. All of them. The Originals, the "Remakes", The Prime Series, and also Other M. Still i think i can do a relatively objective Review.

Now to the Main Event. The Review. Metroid Dread. I really enjoyed it. Lets start with the point most reviews Criticize.

The EMMI's. AKA Dog Robots (though i do not really see where this nick is coming from). Many complain that the Parts of the game where you have to Evade those are no fun at all. I do not share this opinion. I really like this "Enemy you cant beat now" thing. It builds suspense and adds to the Story. And its very pleasing to blast one to smithereens after you got the Omega Gun and let them pay for all the paint they were causing you.

The story itself is pretty good too compared to older Metroid games. I mean yeah there are a few holes in the story. Like why send Machines to Examine a pontential X Thread where they all know the X can infect those Machines. But thats neither here nor there. There are a few great Plot twists and i really like how the Cutscenes are merged in. Also some more background story for Samus and so on. Really cool.

Now to the gameplay. What really got me was that they finally shook up the old pattern. You ever noticed that in most of the games you get the Upgrades in almost the same order? Here for example its about a third into the game when you finally get the Morphball. Aside from that there are the good old elements we never wanna miss, like the Level Structure, the Bossfights how the Upgrades handle and so on. Some of the Bossfights were REALLY hard. Mostly the multi staged ones. The Final boss is Challenging too and really gets the blood pumping.

The Depth of the Characters is also very well done. From Ravenbeak and Quiet Robe to Samus Herself. Every Character has a distinct Personality. Although i really would have liked more from Samus like in Other M or even Fusion.

So all in all it was a well Rounded and very well made Metroid game. They Combined Old School elements with something new in a way that does not feel forced. The only frustrating part where the few crashes i had. Of course always about half an hour or even a whole hour after my last save.

To end this i wanna talk about the Metroid series as a whole. Like i stated above, im a big Fan. I get why there is a bit of a divide between original fans and prime fans, but i really like both. I think thats also why i Really liked Other M. It combines both of the genres to a certain degree. I also really liked the Remake of the First and Second games. I mean the Originals are great but lets face it, the technical advantages of the Remakes make the games much better all in all.

I really hope there is more of those games coming. Although im a bit worried about Metroid Prime 4 because the whole "Prime" Storyline should be finished after all the Phazon is extinguished. But hey, i will let them suprise me.

Thats it, i hope some could enjoy this review and maybe even pick up the game or even more the series. Have fun.
Reactions: MUDD_BR, kylum, Ava96 and 2 others

I didn't read any reviews before playing, and I loved Dread. It's not perfect (what is?) but it's very good. I haven't actually played many other 'vanias yet but I'll probably get around to them after I'm caught up with the Metroid games. Waiting now to see if we're really getting Prime remasters or if I have to dig out the Wii U.

H
GCN A problem with Metroid Prime for GameCube.