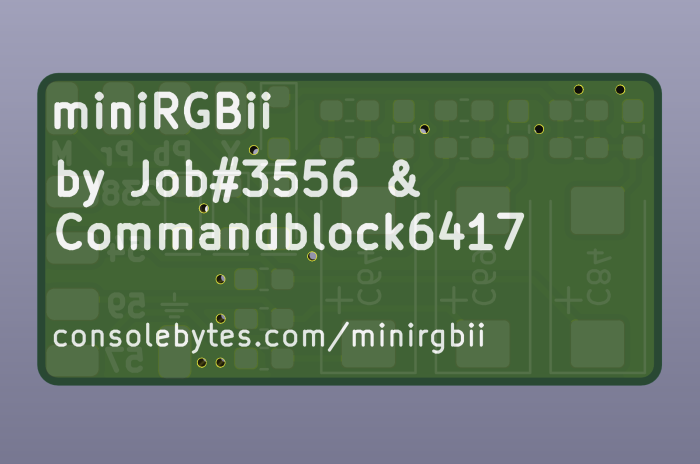 ​
With a Canadian-only launch, a large amount of removed features, and a price that is widely regarded as affordable yet excessive when compared with regular Wii models then still sold in stores - never mind their wide avaialbility on the used market - it is no surprise that the Wii Mini was not a success, especially in the hacking community who assumed it to be nearly mod-proof.

While still not a better deal than a standard model for the common person, the flexibility of this limited system was greatly improved in the recent past through the implementation and release of the BlueBomb exploit in September 2019, dedicated d2xL CIOS, and an USB-Ethernet card enabling homebrew, while hardware enthusiasts discovered more or less convenient pinouts for adding back a reset button, WiFi, Gamecube controller ports 1 and 4, and SD interfaces.

And it is this latter list that is Soon™ going to be further expanded, thanks to the MiniRGBii mod board!
Developed by CommandBlock6417 and Job#3556 of the consolebytes.com community, the MiniRGBii simply provides the $0.50 worth of missing parts and traces required for advanced video outputs (YPbPr, plus either S-Video for NTSC-configured systems or RGB for PAL output) and reconnects the pin required for YPbPr cable detection.

Its inventors do not plan on actually manufacturing them, however the design is open source hardware, meaning kits and/or preassembled boards will likely be available from small independent manufacturers, as is the case for the Vita's psvsd and the Gamecube's SD2SP2.

And, just in case you wanted to see how it actually looks fitted on a console, a MiniRGBii makes a brief cameo in respected Wii hardware guru @DeadlyFoez's most recent live stream, who also is an insider of the project.

Hardware Finally a Wii Mini with HDMI and WiFi