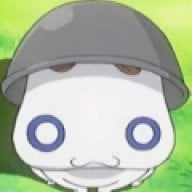 I do troubleshooting as a hobby so I always have friends, family, etc wanting me to fix their computer. I was looking for something like this and this seems amazing. Definitely going to give it a try so thanks a lot for the hard work!
Reactions: JayRo

Ryft said:
I do troubleshooting as a hobby so I always have friends, family, etc wanting me to fix their computer. I was looking for something like this and this seems amazing. Definitely going to give it a try so thanks a lot for the hard work!
Click to expand...


You're welcome, I hope it suits your needs. 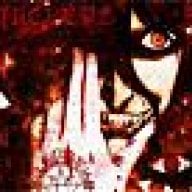 Used this to save a bunch of stuff from a friends PC and it worked great. Keep up the good work
Reactions: Jayro and EZ-Megaman

Those are the stories that keep me going, so thank you!
P

Hmm.. this cat is adorable *downloads*

Anyways. I think Yumi really is awesome. I also made myself a USB stick with lots of tools using it. Highly recommended.
Reactions: pietempgba and Jayro

I also enjoy using YUMI, it's a wonderful USB tool. It's actually what started this project, it was a USB version of this I made. But certain computers would refuse USB booting either due to age, BIOS specifics, or just picky of USB brands, etc... So this DVD version seems much more universal. 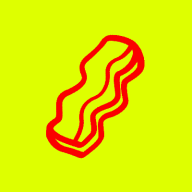 This is great!
Reactions: JayRo

Added these hashes to the first page.
Reactions: osirisjem and JoostinOnline

You should consider adding this http://www.nirsoft.net/utils/product_cd_key_viewer.html
The description is a bit out of date. See the changelog for more products that it scans.

There are plenty of keyfinder programs, but this one works from command line, and scans external drives.

Are there any that are bootable from disc? Because my suite is primarily nothing but bootable utilities in a nutshell.

If anyone has any suggestions for the new theme for the Winter release, post them here. Otherwise I might stick with this color scheme.

I welcome all suggestions. 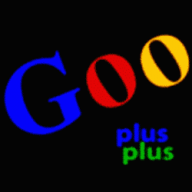 Jayro said:
I also enjoy using YUMI, it's a wonderful USB tool. It's actually what started this project, it was a USB version of this I made. But certain computers would refuse USB booting either due to age, BIOS specifics, or just picky of USB brands, etc... So this DVD version seems much more universal.
Click to expand...

Thanks for your good work. You might want to see if this YUMI-based rescue collection has parts that might be useful for future versions of MediCat DVD.
Reactions: Jayro

FYI: Along with video and audio files, etc., I tend to store ISOs on a 2TB drive formatted for universal access as FAT32.

The current MedCat DVD ISO is slightly more than 4GB so it cannot be stored on a FAT32 partition.
Reactions: naz2x and Jayro

Gooplusplus said:
FYI: Along with video and audio files, etc., I tend to store ISOs on a 2TB drive formatted for universal access as FAT32.

The current MedCat DVD ISO is slightly more than 4GB so it cannot be stored on a FAT32 partition.
Click to expand...


Because of that reason, I am keeping MediCat DVD under 3.99GB specifically for FAT32 storage purposes. The current release is only a bit more than 3GB at the moment.

Oh, and thanks for the YUMI rescue collection. I'll take a serious look into that, and see if there's anything I find useful for integration.
Reactions: Gooplusplus and naz2x
N

Medicat is something that i can use for future repairs.
Reactions: Jayro

naz2x said:
Medicat is something that i can use for future repairs.
Click to expand...


Indeed it is. I am also preparing a USB version using the latest YUMI as the base install. It will be aimed at 16GB and larger flash drives, so I'll be able to add more Linux distros, and people will be able to drag and drop their Windows ISOs to the drive and have Windows bootable immediately, without having to run YUMI. It will be distributed as a flashable .img file, so Winimage (or a similar tool) will be bundled and required for the first run.
Reactions: osirisjem and Gooplusplus

***THIS WILL NOT BOOT FROM USB, SO DON'T ASK***​
(I already have a separate USB version in the works)​

History:
I run a PC repair service out of my apartment, and call it ReSET Computers. As a seasoned PC Technician (A+ Certified by CompTIA) in the field for 16 years, I could never find a software toolbox that could fit my personal needs.... Until I found YUMI. That got me making multiboot USB sticks, and all was great. However, some older hardware (and picky computers) wouldn't boot from them, rendering them useless. Even the F12 boot menu wouldn't work. Sometimes the BIOS just doesn't support bootable USB sticks for whatever reason.

This got me curious to try a DVD variety, for those finicky computers that refuse to (or can't) boot from USB. So for the past 2 months off and on, I have been working on a bootable 3.99GB utility DVD called MediCat DVD. I started with SARDU to get the initial ISO generated with the ISOs I wanted, and went on my own from there.

The Project Objective:
My overall goal of this project is to provide a simplified menu system that's easy to read and understand, while remaining aesthetically pleasing to technicians. I wanted something elegant, but not too distracting. (I figured the blurred wallpaper I made with the menu's drop-shadow looked good enough.) I didn't want it to come across as too technical-looking, or confusing. I also didn't want a butt-ugly DOS-style menu. This is 2014, and there is no need for that anymore... So I did what I could to spruce things up, within the constraints of ISOLINUX. The final generated ISO image of MediCat DVD will always be under 3.99GB for FAT32 storage purposes, beginning with the v6.10.2014 release.

Testing:
I periodically test my ISO in Virtualbox and VMware, whenever I make enough drastic changes in PowerISO. All the artwork was generated by myself from scratch in Photoshop (Yes, I'm aware that I have borrowed and re-purposed the Nyan Cat), and all menus have been extensively modified*, with some parts re-written completely to function as I needed them to. Constant testing to make sure the boot paths are correct takes a large part of my time, but is always necessary.

-Updated ISOs to their latest versions.
-Updated Linux Mint to 17, 64-bit.
-Removed Norton Ghost 15, it was redundant with Acronis, and is no longer a supported product of Symmantec.
-Removed BitDefender, it was too large of an ISO, and wouln't fully boot on some systems.
-Renamed the "System Tools" menu to "Harddisk Tools", since it only contained disk utilities.
-Removed PartedMagic.
-Removed Boot Repair Disk ISO, as it just crashes to busybox during boot on every PC tested.
-Revamped the Windows Recovery menu for simplicity.
-Added both 32-bit and 64-bit Windows 8 recovery discs.
-Added SpinRite 6.0, by popular demand.
-Added "Anti-Virus Scanners" menu.
-Added AVG Antivirus
-Added Sophos Antivirus
-Moved SuperGrubDisk and SuperGrubDisk 2 to the "Harddisk Tools" section, where they seem more appropriate.
-Moved Windows Defender to "Antivirus Scanners" menu
-New artwork
-Minimalist look and feel 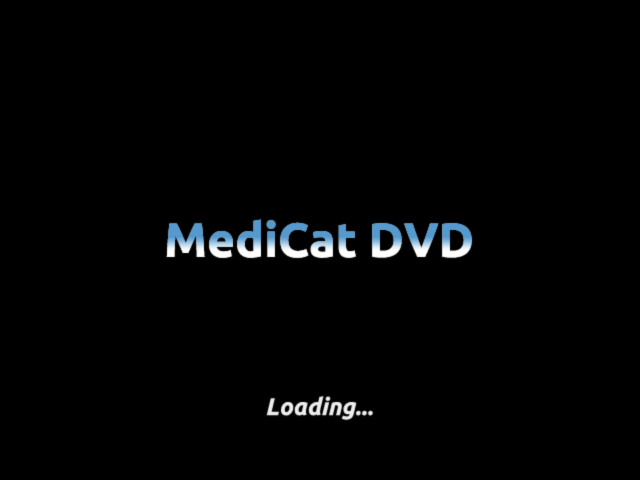 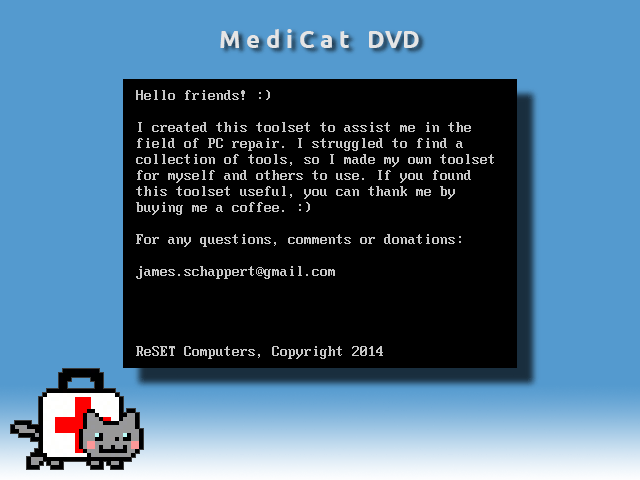 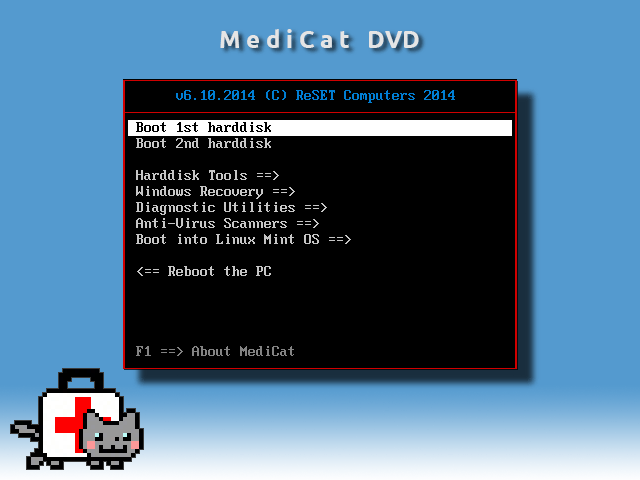 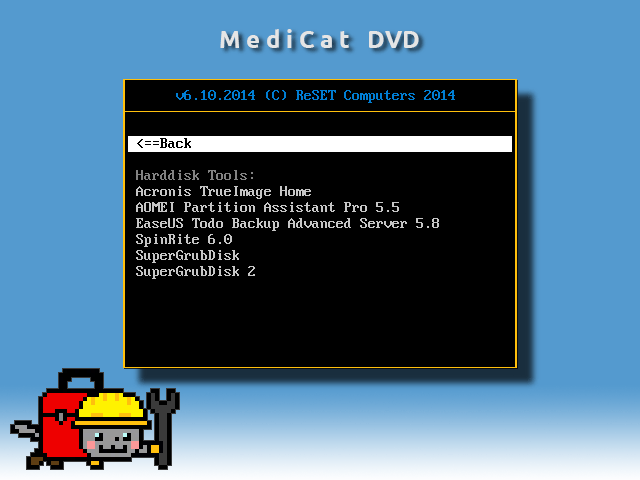 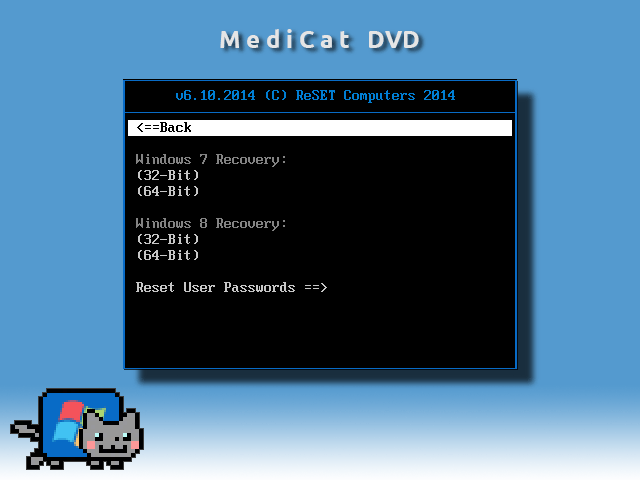 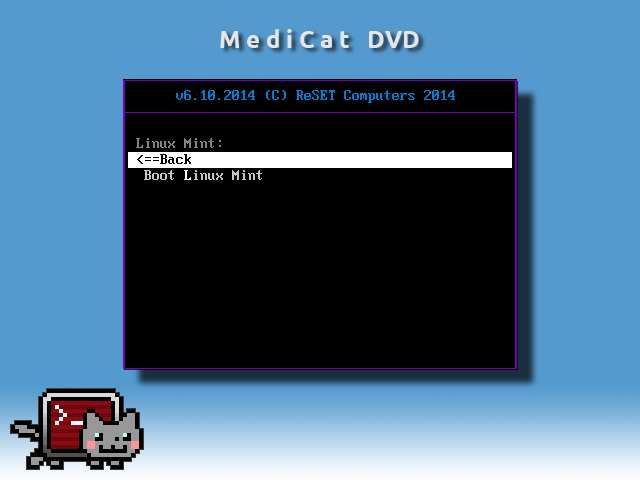 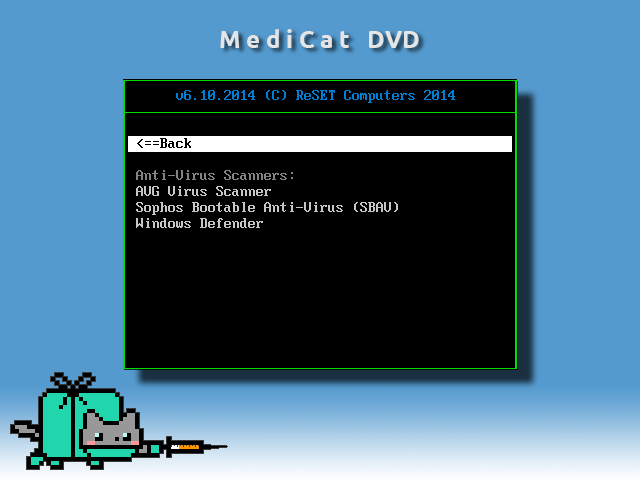 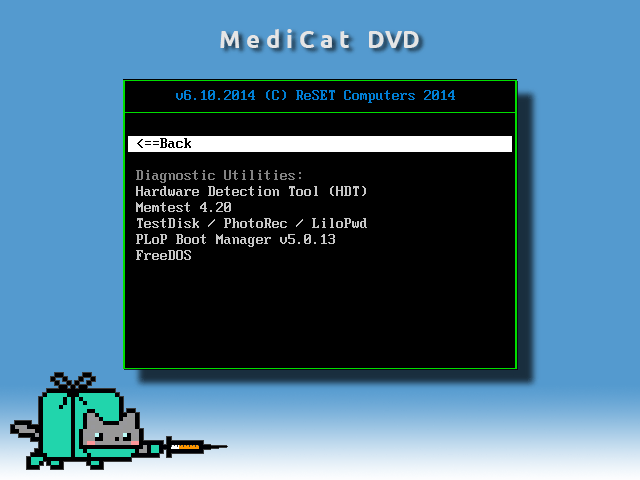 FAQs:
"Will this boot on my Mac?"
Yes, provided your Mac is an Intel Mac, and not of the PPC architecture.

"Is it free?"
Absolutely. I'm not hellbent on making money from my efforts. I am just in it to better my knowledge, and if others can benefit from my creation, so be it.

"Why did you use the Nyan Cat?"
Why not? It's a cute pixel art, and I had fun editing it as an unofficial mascot.

"My computer won't boot the DVD, what's up?"
Make sure your BIOS is set to boot from CD-ROM drive, before the harddrive. Alternatively, there's usually an F12 Boot Menu you can bring up during POST.

"If anyone can make these bootable DVDs and USB sticks, what makes yours so special?"
Nothing, really. Just simplicity, and convenience on my part. Everything is subjective to opinion of usefulness. My DVD may not be everyone's cup of tea, but f it helps you in the field, yay.

*I have also removed any and all ties to SARDU, there is no evidence to suggest the ISO was generated by SARDU. This isn't to claim that I made the ISO myself, because I didn't; SARDU did. I just find it annoying to have their logos plastered everywhere within the ISO. The structural integrity was created entirely by SARDU, I only edited their initial ISO from their provided GUI.
Click to expand...

This is extremely useful. I mainly use linux, but i have windows 7 on many of them. Windows tends to crash alot, this may save my ass some day!
Reactions: Jayro
J

Am I right to assume Windows Loader by DAZ is included in this ISO?