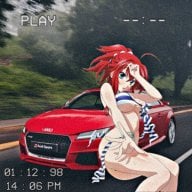 Hello friends, I want to make my very own emulator similar to dolphin. But it’s for GC, Wii, And WiiU.

I don’t have a name yet. But I was wondering how do you even make emulators? I’ve coded a few times using Visual Studio Code and some python and c++. Not sure if they are even useful at all. I’ve always wanted to make like an emulator type arcade thing for me and my friends.

this is a general step by step for an old 16 bit arcade emulator or this for a more general machine emulator.
there's interpretate first (and in most situations enough) of the CPU, just most likely you'll got a few lines of code that run way to fast (or slow) if you only interpretate, that's where you've got torecalculate the actual speed of the device your emulating compared to the device you'll make the emulator for, this is what sets an emulator appart from an interpretator, make enough time loops to slowdown the process toslow it down or skipping inbetween lines of code you could miss whithout noticing for speeding up.
i'm not a programmer though, so i'd probably mis a few steps.

"GC, Wii and Wii U" while "I’ve coded a few times using Visual Studio Code and some python and c++".
That is jumping in somewhat at the deep end, especially if you want the end result to be practical rather than a learning exercise (many will make an emulator, usually a weaker one, to learn the hardware they are emulating). All those devices are fairly high performance compared to modern PCs so tend to require more intense means of emulating. Most would start with something a bit weaker and consequently more forgiving or needing less resources. If you don't have a device in mind then CHIP-8 is what many would look too, I am not as great a fan of that as some are but I will not knock it either.


Otherwise.
Go read up on dynamic recompilation aka dynarec and come back when you can give a 20 odd minute talk on it. You are unlikely to make even a proof of concept gamecube emulator on modern hardware without it.

You will probably want a reasonable grounding in some form of assembly. https://stuff.pypt.lt/ggt80x86a/asm1.htm and https://www.plantation-productions.com/Webster/ being for the PC but grasp that and most other things will make sense be they modern supercomputer or barely a computer old consoles.

https://trixter.oldskool.org/2015/04/07/8088-mph-we-break-all-your-emulators/ . You don't have to play to that level but an appreciation of what it is and why someone would want to do it is essential in this.

"I’ve always wanted to make like an emulator type arcade thing for me and my friends."
Why not make a MAME cabinet but using whatever emulator you like?
Reactions: MORSHU8KRTXON

D
Some Autohotkey scripts to make your computer better

How fast are CPU emulators ?

A
Hardware Are capture cards the only way to play consoles on a PC?