Gaming Looking for a Mario and Luigi: Bowser's Inside Story (DS) .sav File 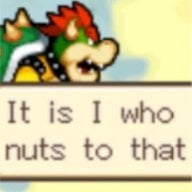 Location
it is i who nuts to that

Hey guys, a bunch of weeks ago i lost all of my progress because my brother wanted to make a stupid unfunny joke and delete some important stuff from my pc, i'm looking for a save file since august because i don't feel like wasting another 20 hours just to get to the point i left the game, but i literally can't find anything, so as a last resort i'm asking on this forum if anyone has a save file near the memory bank boss fight (honestly even if you're 1 or 2 bosses before this one, i'll take it anyways, it's still better than nothing), i was playing on the European version of the game, specifically "4268 - Mario & Luigi - Bowser's Inside Story (Europe) (En,Fr,De,Es,It)". (american .sav files are fine too, i just preferred the European one because i was playing the game in italian, but if you're near that point in an american rom then that's fine too, i'll take it)

If you're near that part of the game, please send your .sav file to me, i don't know if you can send stuff trough this forum, because this is my first time using Gbatemp, so here's my discord in case you can't send stuff in this thread "Sluka#0420".

And please, don't reply "just play it yourself" like i saw in some other threads, i honestly don't want to replay the whole game all over again, so if you don't want to help me then ignore this post, thank you very much.

There are tools to undelete files.
I usually like recuva
https://www.ccleaner.com/recuva
and photorec
https://www.cgsecurity.org/wiki/PhotoRec

If you have been using it a lot for weeks now that is harder.

I don't have such a save and most of the time it will be complete game saves if they are uploaded to places.

That said if you are on a PC can you maybe use some infinite health cheats and the turbo button to skip through a bunch of the game?
Reactions: banjo2

Gaming What are your favorite DS games?

N
Gaming Looking for Mario and Luigi: Bowser's inside for 3ds save file

tempBOT: @ kenenthk is always drunk with tempbot 1 minute ago
Chat 4