Hardware Is my m.2 NVMe SSD faulty? How should I deal with a clean Win10 install? Etc etc etc

Recently got a new gaming laptop (Dell Inspiron 7577) that came with an m.2 SSD, and initially, it was doing fine after I did a test using CrystalDiskMark on it after Windows setup. But, not long after idling, the drive's ability to write becomes totally bogged down, and generally does this after each restart. The drive in particular is a Toshiba KXG50ZNV256G M.2 NVMe 256GB SSD. The drive is rated to do around 2700 MB/s sequential reads and about 1050 MB/s sequential writes. Reads are perfectly fine, but writes are not. Here are some comparison images I made up that show when it is correctly working (left side of each), and when it gets bogged down (right side of each). Tested with CrystalDiskMark and copying files from one directory to another on the same drive. 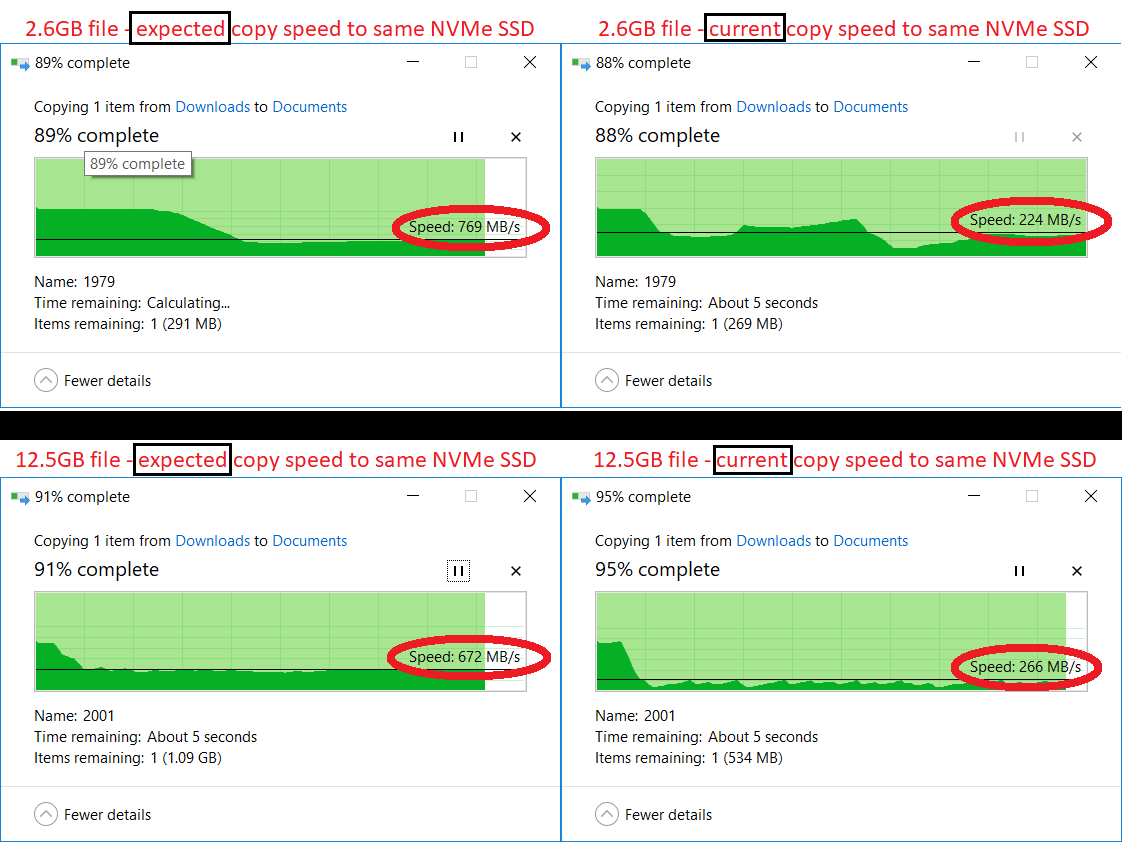 I want to note that for the copy images, the left where it's properly working is nice and generally smooth, but the right where the speed is dropped shows quite a wave, like it's trying to work, then cuts off to try again. As an added bonus, I also used UserBenchmark that also reflects when it is working fine, and when it does not, dropping from the 96th percentile to the 62th percentile. Scroll down to the Drive section for each.

I have even done a number of sequenced tests with CDM, one right after another, and at times the write speeds of one sequential section of the two will be up while the other is down, vice versa, or both are up, or both are down. It's really inconsistent. I want to also note that the system was set up with SATA operations configured for Raid On, quoted "SATA configured to support RAID mode (Intel Rapid Restore Technology)". If I were to change this to AHCI, then Windows crashes when attempting to boot. I have managed to get that working by first booting in Raid On mode, configuring to do a safeboot on next restart (to which prior to booting into that, swap SATA operation from Raid to AHCI), let it do the safeboot which from what I understand installs the necessary AHCI support, then restart to normal booting with AHCI still set. Thought that perhaps RAID mode was causing an issue, but having done this, it continued to have write speed issues.

I've been in contact with Dell for the past couple of days to get this resolved, from updating the BIOS and chipsets, but nothing has helped. It's unfortunate that they mention that they won't consider any results from 3rd-party applications, but I nonetheless presented these results to them. Now, they want to call me on one of my available days (today or Monday) with someone from their senior technical staff about it. Before that happens though, I'd like to know if anyone here understands what's going on, and if they know of anything regarding it. Perhaps it's just a driver issue or something, or the drive itself is faulty. I've done a factory recover a few times to see if the issue would resolve, but it starts great at the beginning, but falls short later on, even if I don't update anything. One thing though is that when they had me update the chipset with a link they gave me, it basically prevented the drive from ever obtaining its best speed, so it gave me a thought that it might be a driver issue. But, I don't know if there's a specific driver I need. The recovery image used on the SSD in one of the partitions may not contain a proper driver for the SSD, hence why it starts good then goes bad later. Thought about doing a clean install of Windows 10, but I'm hesitant because I don't know which partitions I can safely remove. 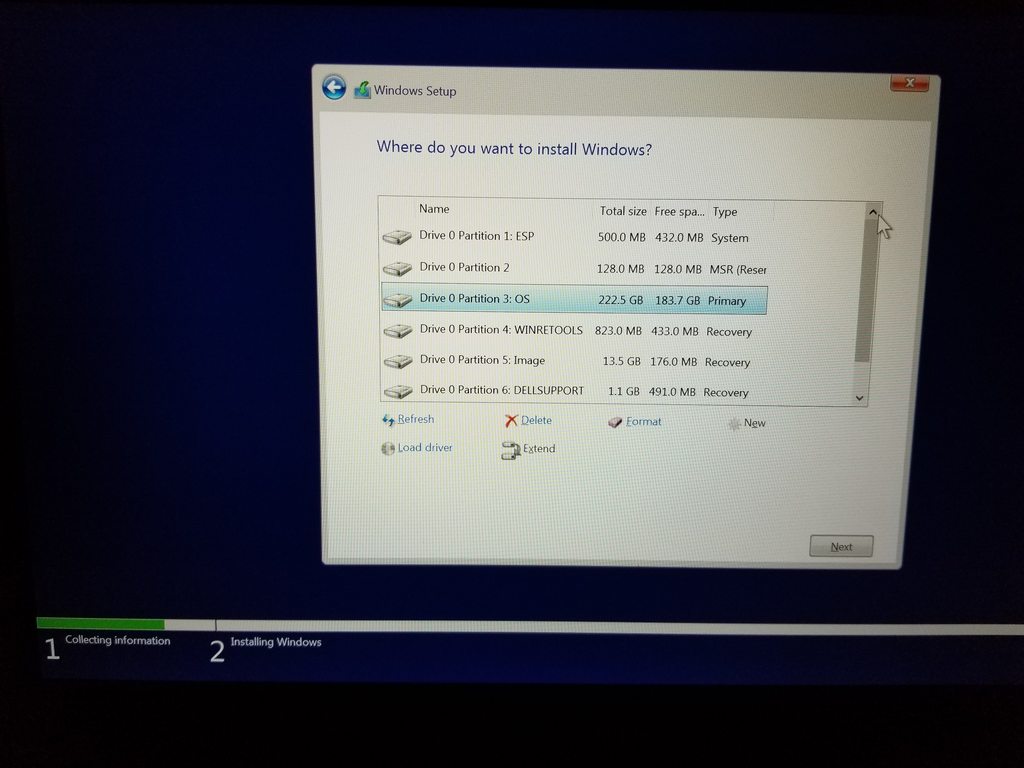 The ones marked Recovery I'm sure must not be deleted if I want to still use them, as they are accessed via the BIOS (I want to keep them anyways just in case). The one marked Primary for the OS is certainly one I can delete. Dunno about the first two (System and MSR). But, let's say I can delete the first 3 to become unallocated space. What partitions will Windows 10 make? Will it make those 3 again? What if I choose to revert back to the factory recovery image later on? Any idea if it'll make those partitions like they are shown in the above image in the spoiler automatically, or can I at least make them manually through that partition service in the install with same names and purposes? I really don't want to mess with this until I know what I can and shouldn't do. Only reason I'd care to try a clean install, as mentioned earlier, is to see if the SSD has any problems that might be associated with drivers in the recovery image.

Ugh, that's probably a lot to take in. Any help would be great. I'm planning on making this laptop my main computer, putting away my desktop or making that as a server or something. So, I just want to make sure I have it working properly. Going to get a 1TB 850 EVO in the mail by next week to put into it.

If you want to do a clean install (with a copy of Windows downloaded directly from MS via the media creation tool, or more or less official ISO mirrors like Dreamspark or Bangmaod), everything can be removed;

A standard install on an EFI system will have 4 partitions by default unless they changed it recently (ESP, Windows boot files, Microsoft reserved, C:\ ) however the middle two are optional if you don't want to use Bitlocker/LVM (their automatic creation can be dodged my manually creating ESP and C:\ with an external partitioner or shift+f10>diskpart)

If you ever plan to use the official factory image, it's a good idea to backup it using the "create recovery media" feature of the currently installed Windows, but in general most people don't care about ever wanting the bloatware back

If you're buying a new drive, it's a nonissue - simply remove the original one and put it in back the box!


As for the original question, Windows doesn't like the operation mode of its boot disk being changed (that's in part the reason you can't just put a Windows disk in any arbitrary other PC and boot it from there), if you really wanted to change it there's a registry mod to be done or a sysprep/generalize, but you're reinstalling anyway so just change it before you do

Tutorial Multiple emuMMC setup, including restoring a clean NAND for online use

Tutorial Guide: how to dump emuMMC games to NSP

@ KenniesNewName: Psi gets a nickel each time he bricks something 35 minutes ago
Chat 0