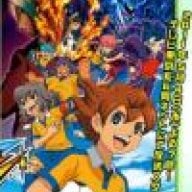 As previously announced, Inazuma Eleven 3 retains the basics of past Inazuma Eleven games, providing a fusion of RPG-like charater building and map exploration with full soccer mechanics, controlled via the stylus. In part 3, you take control of Inazuma Japan and face off against teams from throughout the world on Riocot Island.

The event saw announcement of final release information for the game. Similar to Inazuma Eleven 2, Inazuma Eleven 3 will be split into two separate SKUs, respectively "Spark" and "Bomber." Both will arrive on July 1, priced at ¥4,980 each.


At the press conference, Hino made note of the added volume for part 3. The cart size has jumped up to 4 gigabits, making this Level-5's second announced title following Ni no Kuni to use the high capacity. The added space is being used to give the game over 2,000 characters and 300 moves.

Hino also announced a couple of new gameplay feature for the game: Hissatsu Tactics and Perfect Zone Press. The latter feature has already appeared in the Inazuma Eleven anime and lets you surround a single enemy in a wall of fire.

Level-5 previously announced the 2->3 Super Link feature. This lets you bring over your ally characters from Inazuma Eleven 2.
Click to expand...

I would love to see this released in the EU

The Ni no Kuni movie will debut on Netflix next week