I got a question.

Somewhat serious, but given the "meme"iness of the topic itself, I'll post it here.

Who exactly are Leafyishere and Keemstar? I know Leafy is a Youtuber, but other than that, I'm not sure. Can someone explain why they're like memes now or something?

ya basically. or Cyber bullies 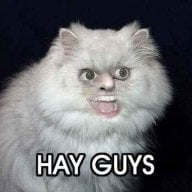 Location
Underground, in my mother's basement.

Leafy is here is a commentary channel, which in it's purest form, play over videos and make fun of it. Leafy is probably the worst out of the three commentary channels, making bad jokes and such. Keemstar is a guy who reports the "News" on youtube, which means he talks about internet drama, and makes false accusations of pedophiles and such. Both are not very good. If you want a good commentary channel, look up Pyrocynical. He does a better job of it. If you want a better "news" source, look up Scarce. Scarce reports on stuff like shootings near youtubers and such.
Reactions: CIAwesome526
T

That's like calling them tolerable, actually. That's how bad they are.

L
Why would I use emunand?

I know this is EoF, but I want to talk seriously for a moment about bullying

A couple questions on the trading section...