And there sat Jacklack3, sitting in his home. He could not believe what he just witnessed. With his hand shaking harder than San Andreas Fault line, he picked up the old rotary phone he had on the table and dialed a number.
Brrrrring.
Brrrrrrrrrrring.
Brrrrrrr-
"Hello?"
Jacklack was silent. He couldn't speak. He couldn't motivate his muscles to move. He couldn't convey. Luckily, versed in the art of the internet, he pulled up a morse code sheet, and started tapping.
"What the fuck?" PipeWarp said. "All I hear is fucking tapping."
"Tapping?" Scott Pilgrim asked. "Wait, no way..."
"What? What do you mean 'no way' you abominable genetic defect? I'm hanging up."
"NO, DON'T!"

Scott quickly got out a piece of paper and started listening. One by one, he wrote down letters to the message that was trying to be conveyed.
"You fucking serious?" exclaimed PipeWarp. "I thought this shit only happens in movies."
"Shut the hell up, dipshit. I'm trying to write it down." proclaimed Scott.
"I have no idea why I even work with you."
"I got it!"
PipeWarp grabbed a hold of the sheet and started reading.
"Help. Neighbor horny. Fucked 5. Coming after me. 721 Govt. St. Victoria. BC V8W 1W5. Canada. My lord, Scott, we must save this man and apprehend the criminal!"
Scott went over to the phone and said, "We're on our way, sir, don't worry." and hung up.

And then the phone started ringing. Again. Scott quickly picked the phone up and listened. All that came out of the speaker were two words:
"Lillith escaped."
Scott dropped the phone and fell to the floor.
"What's wrong?" PipeWarp asked.
"Lilith's escaped..." Scott hoarsely whispered before collapsing to the ground.
PipeWarp quickly grabbed the phone and and rung up HQ.
"QUICK! WHICH FIELD AGENTS DO WE HAVE IN CANADA?" he shouted with a hint of despair.
"Sir, we only have one field agent in Canada."
"Is it Simmons?"
"No sir, it's a C-Rank officer."
"A C-Rank officer? Why do we fucking have no one strong in Canada?"
"Everyone is in therapy from the last encounter with Lilith."
"Shit. Who's the agent? Robert?"
"No, sir, it's Alice. The newbie."
"You've gotta be fucking kidding me."
PipeWarp slammed the phone into the wall, sat down, and had a mental breakdown.

Alice was sitting in Dunkin Donuts enjoying a donut and browsing GBAtemp as PineappleGod.
"Man, I never knew Dunkin was in Canada. Weird, huh?"
Opposite to her was Stealphie, who was wearing an ankle bracelet and was under criminal reform.
"You know, Alice, I really fucking hate Mario Party 9. How the fuck do you like it?"
"I dunno."
"If I could kill you I would."
A ringing came from the PDA. Alice put down her phone and picked up her last donut, shoving it all into her mouth. Then she read the PDA message.
"Holy shit, Stel, we got out first big case!"
"You mean your first big case."
"Yeah! Someone is horny and it's only 5 minutes away. Let's go!"
Stealphie sighed.
"Fine," he said, "but I'm driving because you women can't drive."
"Fine by me!" Alice exclaimed.
However, what Alice failed to notice was the DEFCON 1 warning on the global assignment.

After a bit, Alice and Stealphie arrived at the location. Alice opened the car door and heard hellish screams and moans. She then proceeded to close the door. Then open. Then close.
"What the fuck are you doing?" asked Stealphie, who had already gotten out.
"It's so cool! One moment I hear death, and the other moment I don't!" Alice replied.
"This is why you are Rank C, Alice."
Then there was an explosion. It didn't hit them at first, but it did, once a dead body hit the windshield and broke the glass.
"Oh, fuck." Alice said, before getting out of the car, and running into the building.

As soon as the duo hit the entrance, they stopped. The marble was bloodstained, and the walls covered in a white substance. Dead bodies lay all over the ground.
"Oh my god." Alice said before throwing up.
"All the virginities, taken, and then their lives. How can one person have this much power?" Stealphie asked.
"I don't know, Stel, I don't know. But whoever this person is, is sick, that's what." Alice replied.
The two slowly started walking forwards into the hotel.
"What floor does your PDA say the target is on?" Stealphie inquired.
"That's the thing: it doesn't say." replied Alice.
"Then that means we'll have to check every single room."
"Every single one?"
"Every single one. All 464 of them."

Meanwhile, in the UK, PipeWarp and Scott had arrived at Horny Police HQ2. They aggressively walked in and grabbed a helicopter. As they were about to take off, the regional manager ran up to them.
"Director Warp!" he shouted.
"Yes, what do you need?"
"Sir, what do you want us to do?"
"I need as much firepower as possible in Canada, and I need intel as to what Lilith is looking for. She said she's looking for something the last time we spoke. I want to know what it is."
"Yes sir. How should we contact you?"
"This time I'm giving you my discord, it's PipeWarp#7823. Now we need to go. This is for the safety of the world."
"Yes sir! We will do our best!"
"May the demon have mercy on you."
And off Pipe and Scott went, up in the clouds, straight to Canada, with their nitrous-enhanced helicopter.

"We searched 400 rooms already, and all of them had dead bodies. Are we sure the target is even in the building anymore?" Alice asked.
"Who's the fucking horny police officer, you or me?" Stealphie said. "We must be sure."
Alice opened the door to room 404. There was no furniture, just a table and a phone.
"What the fuck?"
Whimpering could be heard. Alice took out her gun, and got ready, then she opened the bathroom door. Jacklack was sitting there, shivering with fear, crying silently. Alice put down her gun.
"It's okay, we're here to get you out. But you have to follow our every direction."
Jacklack silently nodded, attempted to stop crying and failed, and started following them. With Alice covering from the front and Stealphie covering from the back, they slowly guided Jack out of the building.

By this time, Scott and PipeWarp had arrived in Canada. At the airport, x65943 approached them.
"Hey, I'm director of operations in North America, call me X. We're prepared a car for you guys leading directly to Ground Zero. I'll be coming along with y'all." x65943 said.
"Thanks, I appreciate it, X. Let's go." Pipe said.
And off they went and started driving, with armed forces behind them.

"RUNRUNRUNRUNRUN!" Alice hysterically screamed. In the heat of the moment, because of the absurdity, she had suddenly gained the strength to carry Jack, and was doing do with one arm. Jack, being Jack, was utterly confused and started wailing like a baby. Which was justified, because Lilith was chasing them.
"BLOODBLOODBLOODBLOODHORNYHORNYHORNYHORNYHORNY" it screamed as it chased them. Alice didn't care if she got hurt at this point, she was shit scared. While running, she started typing on GBAtemp.
If I die, I leave all my possessions to DailyWeather.
"What the absolute fuck are you doing Alice?" Stealphie asked.
"Last will. Posting now. Okay we're gonna jump out the fourth floor window."
"WHAT?"
"Too late jump out NOW!"
And this is where PipeWarp and company had arrived just in time, because as soon as the car arrived at the scene, Jack, Alice, and Stealphie fell on it.
"What the fuck?" Scott enquired.
"DRIVEGOGOGOGO!" Alice said.
And they drove. As the building exploded and the backup forces they had brought with them stayed at the scene of the crime, they caught a glimpse of a black smokey figure following them.
"Fuck me." PipeWarp said.
x65943 spoke into the radio. "Uh, we're gonna need more reinforcements at our location now."
The other person on the radio said, "We're teleporting you now, hold on tight."
"Wait did she say teleport?" Stealphie asked.
"Oh this is gonna hurt." groaned Alice.
And with a flash and a bang everyone except Lilith landed in HQ3 in Brazil.
"You weren't wrong, that did fucking hurt a lot." Stealphie said.
A woman walked up to PipeWarp, who was trying to figure out if his balls had been rearranged.
"Sir, we found out what Lillith wants."
"What is it?"
"We need to protect former president Donald Trump."
"What the hell? Why? Doesn't he have HQ4 protecting him or whatever?"
"You don't understand, sir. Lilith wants Trump's heart. It has the power to amplify any trait of choosing by 100 times."
"Wanting Trump's heart? That means..."
"That's right, if she gets it she'll be able to make the world horny."
"You've gotta be FUCKING KIDDING ME!"


End of Episode 4.
Press X to Save.
Saved.
Press X to continue and install Episode 5 to the HDD.
Installing Episode 5.
Last edited by PineappleGod, Jan 29, 2021
Reactions: slaphappygamer, ClancyDaEnlightened, 1B51004 and 3 others

Episodes 1-3 have not been published on the temp yet due to reasons, but I thought I'd publish Episode 4 before I work on Episode 5.
Reactions: Julie_Pilgrim, Stealphie, IanSkinner1982 and 1 other person

*cough* *cough* dear god, smoking for dramatic effect is not worth it at all
Reactions: Seriel, BigOnYa, ClancyDaEnlightened and 2 others

Scott_pilgrim said:
*lights cigarette* I remember when we thought Lilith was on our side

*cough* *cough* dear god, smoking for dramatic effect is not worth it at all
Click to expand...

I can join your stupid police if you leave Lilith alone, they're innocent
Reactions: PineappleGod, PipeWarp and Julie_Pilgrim

IC_ said:
I can join your stupid police if you leave Lilith alone, they're innocent
Click to expand...

IC_ said:
I can join your stupid police if you leave Lilith alone, they're innocent
Click to expand...

You realize this is not fiction, but a real story, right?
Reactions: Julie_Pilgrim

PineappleGod said:
You realize this is not fiction, but a real story, right?
Click to expand...

Yes, if you live Lilith alone then everything will go back to being normal.
Reactions: PineappleGod and Julie_Pilgrim

Scott_pilgrim said:
What server was this?
Click to expand...

Yeah your house got bombed in episode 2.
Reactions: Julie_Pilgrim and PipeWarp

PineappleGod said:
Yeah your house got bombed in episode 2.
Click to expand...

I live in an apartment tho, meaning hundreds died
Reactions: PineappleGod

Scott_pilgrim said:
I live in an apartment tho, meaning hundreds died
Click to expand...

this could become the first GBATemp fanfic
Reactions: PineappleGod and Julie_Pilgrim

Y’all better not be planning on harassing me again 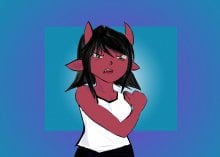 The Boy who Lost the Ability to Love