GBAtemp game of the week #51

GBAtemp book game club time.
The series aims to share some of the more interesting titles for the GBA, DS and Wii (and occasionally games that can be emulated well on the DS), be they ROM hack, commercial release, homebrew or something like a leaked beta. The rough order of events is a suggestion of a game, or a couple of related ones, is made and then those that wish can discuss a playthrough of it, be it for the entire game or things about it that caught their interest.
The desire to select interesting titles means we are actively not making this a "top ? games as chosen by the GBAtemp game of the week/retro reviews desk" as well. On occasion instead of just making a selection we might suggest a run (like achievements but actually fun to get) or compare and contrast will be posed instead. We might also spin in another selection criteria like only released in a certain region, available for next to nothing today or only seen in a limited run early in the console lifetime.

We have covered adventure games in the past around here, however we have less on horror titles. On the matter of horror the DS had a few proper ones and this game very much belongs to both horror and adventure. It came out in English in late October 2008, such a time also meant it got a bit overshadowed by Castlevania: Order of Ecclesia and the impending release of Chrono Trigger, not to mention everything else that was going on at that point in time. This has left the game with something of an "overlooked gem" status so it is here now.
Plot wise we do not want to give much away but it weaves two quite dark stories together quite nicely (even if waking up with amnesia is the starting point) and features some great use of the touchscreen. Development was done by Workjam, other than this they are only really known outside Japan for "Detective Saburo Jinguji", aka "Jake Hunter" on the few occasions it appears outside Japan. Aksys Games stepped up here for localisation and publishing and they do handle a fair few games like this.
The game itself, perhaps more than any other DS game, evokes memories of the classics of the horror/puzzle/adventure genre "7th guest" and "11th hour" which is no bad thing, although this is a bit more action heavy than those titles.
Ratings in terms of reviewers are not really a concern of GBAtemp book game club, ratings by censorship boards even less so, however it should be noted this is one of the few DS games to get the M rating in the American ESRB ratings and it uses it well to make a fantastic atmosphere (definitely a lights off and nobody in the house sort of game).

Trailer, some let's plays and such are available as well. 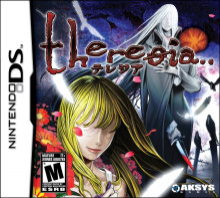 Why play this when there is "999: Nine Hours, Nine Persons, Nine Doors", or is the DS the new home of adventure games?

This thread should get you other links in this series

I loved this game! I still have to finish the "Extra" New Game+ mode... I'll get around to do it, someday.