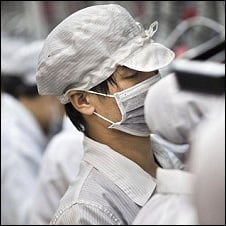 While it's known that workers in Chinese factories sometimes face terrible working conditions, the companies behind them often feign innocence or attempt to downplay the situation. It seems now that suicide has become such a problem that Foxconn workers who make the iPad and related devices are forcing their workers to sign a pledge not to commit suicide.

While this could be interpreted as a step in the right direction, the fact that workers feel the need to commit suicide in such numbers as to cause a problem to the company in the first place is the big issue. In addition the pledge states that if the worker does commit suicide their family can only seek the minimum in damages from the company, which brings into question Foxconn's actual motives.