Hacking Flashcart downgrade? Or a fix for a weird "glitch" I caused 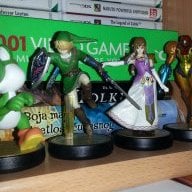 Hello everyone,
and sorry for a noobish question caused by a meganoobish action I took.
This is my flashcart
http://www.r4isdhc.hk/download_white_new/index.htm
Or at least it looks the same, bought it in december 2012, served me well ever since.
Then today, for reasons unimaginable (I wanted to play Shantae: Risky's revenge on my DS Lite lol) I went to the dev site and accidentally clicked on the wrong card. This one:
http://www.r4isdhc.hk/download_white_new2013/index.htm
I was happy to see new FW was released (even though it wasn't lol) and immediately applied it, along with the kernel. Everything booted up just fine. I had my list of games, but when I tried starting one of them, it just gave me the white screen. All the games give me the white screen now, EXCEPT the emulators I have there too (for SNES and GENESIS), which still work like a charm.
Overall, my 2012 NEW cart boots up with 2013 FW and its kernel, lists all the games but can load none. Did I brick my cart or what? If I have, can I revert back to the FW I had on it before (I believe it was something like 5.05 or 5.06 and now is 7.0)? The only kernel that boot now are 1.62 and 1.63 (as far as I can tell).
Sorry again for a laugh-worthy post, but I know there are a lot of nice people here who would at least try helping me. Thanks for your time! And please help. <3
Last edited by thegrimlord, Jan 16, 2016

Double post incoming... In service of a bump and a continuation of a noobish story.
In a desperate attempt to undo the firmware, I came across an interesting (desperate idea). I have loaded another card I have (R4 revolution for DS, black card, that supports up to 2GB cards) and have put 5.06 FW on it, started installation of FW with it but did not confirm, then I have ejected and switched cart to the one I messed up. Then I have confirmed the installation, but unfortunately it got stuck on "erasing device". Common sense would be that I was not allowed to switch the cards, that the firmware software or something did not initialize the new card when it was inserted... But it somehow managed to mess up my cart even further. Now it does not boot at all. lol How come it deleted the FW but did not write new one at all? Is destiny so ironic that it does what it should not but fails to do what it should?
No way back now, huh? Is there any explanation for this noobish quest of mine?
Either way, the drink is on me... Life is life. And any reply at all would be more than nice.

J
Hacking I think I bricked my R4i Gold

C
Hacking Question Help, I bricked my switch with a FW update