Backstory: Having always thought I probably wouldn't be into the WarioWare games, but then constantly seeing them near the top of best GBA games lists when I got my Micro, I've been playing the first WarioWare game and really enjoying it - and am almost done with it. I'd like to try WarioWare Twisted, but a) it was never released in Europe, b) I can't read Japanese, c) American carts of it are expensive. I could try playing it emulated on Switch with motion controls, or play the Japanese cart and miss out on I don't know how much, but maybe a fun electronics project could result in a better solution.

Plan: buy cheap Japanese version of the game (Mawaru Made in Wario), flash American ROM of the game to a suitable ROM chip, replace the ROM chip in the Japanese cart. My soldering skills are not currently up to this task, but I've bought new kit and improving my skills is already a separate plan. So the next steps of this specific plan involve identifying the chip on the cart and finding a flashable chip that would work in its place.

I found a nice clear photo on ebay of the American cartridge PCB, hopefully the Japanese one would be the same. 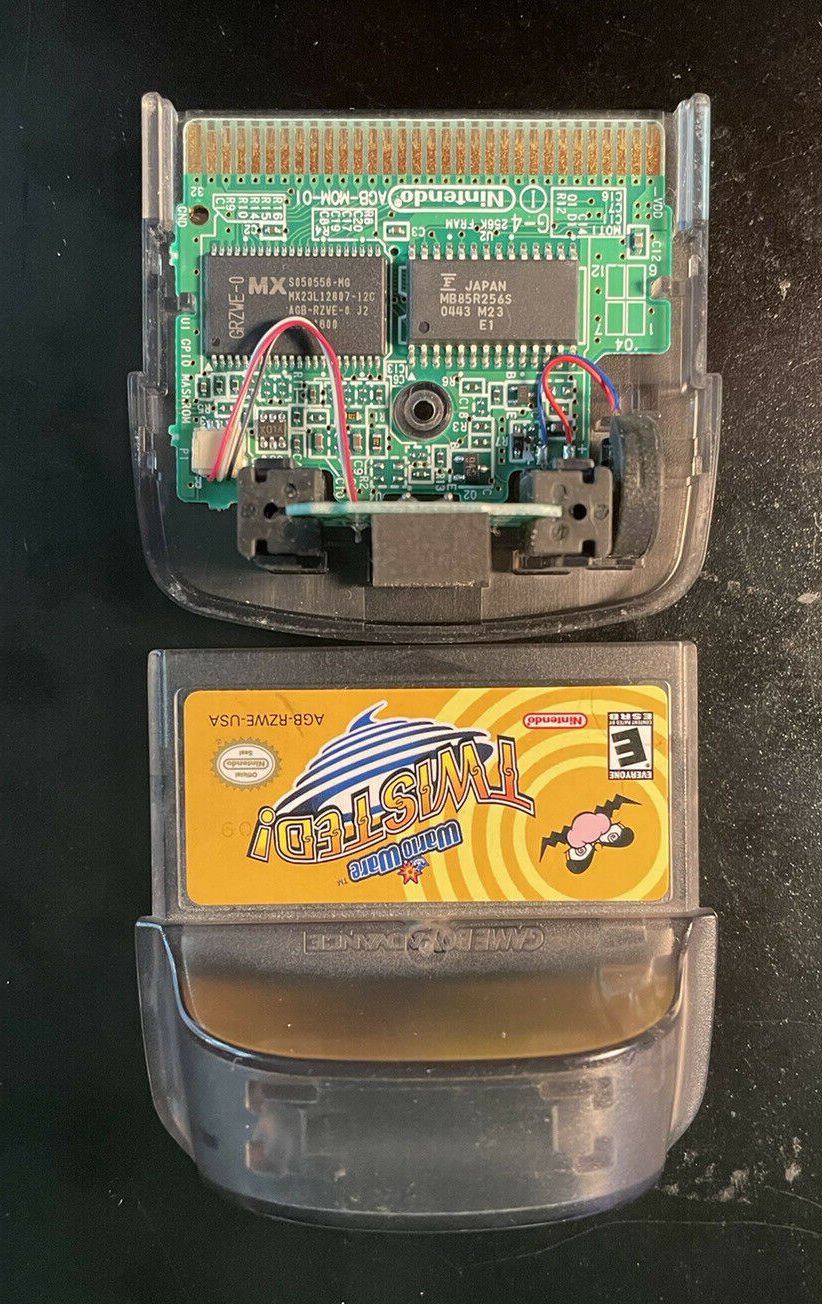 The smaller chip is FRAM for saves, and the larger one is the maskrom. Googling the number starting with MX finds lots of places to buy it, but not a great deal of tech spec info, but the number "128" is in there which agrees with interweb data that the game is 128Megabit (16MegaByte). So ideally we want a 128Mbit flash rom (or maybe larger capacity would work) that has the same physical dimensions and pinouts - tho equivalent pinouts in a different physical form could potentially be managed with an ugly wiring job, hopefully that won't be needed.

Anyone know how I'd go about trying to find that? If there are good starting points for research it could cut down a lot of time on random googling. Would the same chip with the aforementioned MX number work and be flashable?
A really convenient outcome might be if there happened to be a bootleg game cart that contained an appropriate chip, that could be flashed with one of the known bootleg-cart-flashing methods, and then the chip transferred, but a loose chip and separate flashing hardware are an option too (I already have raspberry pis, and the other gadgets that are used for flashing are likely to be useful for other things in future).

This might turn out to be unrealistic, but it has the potential to be a nerdy project I'll enjoy doing (and contribute to my general plan of working on my soldering/electronics skills), and if I give up on it I'll still have the cart to play the game in Japanese.
Last edited by hippy dave, Jun 16, 2021
Reactions: mrgone and cearp

There are some pin/protocol compatible ROM chips that people have used, and you could probably do an interface chip (many of the older repros do this and have a chip to store and a low power programmable chip to translate commands -- might not be able to pull it off with a microcontroller but a CPLD or something might and spare you the hassle of going full FPGA).

There is also the option to come the other way and have the motion controls section used in conjunction with a GBA flash cart. The motion control goes out over the GPIO rather than something fun like modifying an area of the ROM
http://problemkaputt.de/gbatek.htm#gbacartgyrosensor
See if you can find one of those cart switching devices and you can probably get it done by throwing some wires around and cutting a few traces rather than playing surface mount soldering). I don't have any names offhand (I have a DS one, and have seen them for near enough everything as it is a simple enough concept -- you make however many slots and the means to switch enough pins to go between them). I tend to get them for breakout of pin slots so I can stick an oscilloscope or whatever on cart pins but should afford some measure here. Power draw might be a fun thing to navigate but doable enough (might want to look into lifting pins on the ROM chip of your Japanese game, assuming you don't just straight cut down the PCB).

Sadly I don't think you are going to easily be able to emulate the game via a DS flash cart (GBA emulation that is not on an enhanced flash cart like the DSTwo, ISMM or iplayer tends not to be up to much and said emulators I don't think are open source, not to mention you will likely be wanting a DSTwo as those are the main ones to have custom stuff and good luck finding one of those today) and just have it chat to the GBA slot like we saw for pokemon games speaking to flash carts for pal park and similar such things. It is theoretically possible but I would also note most of the time said enhanced flash carts kept it all in house on the cart's own CPU and speaking to DS memory was tricky, having read time gyro data... I would want to play one with lag just to see what it is like but I doubt it would be fun.
Reactions: mrgone and hippy dave

Thank you, lots of good info as always!

FAST6191 said:
There are some pin/protocol compatible ROM chips that people have used,
Click to expand...

Don't suppose you have a reference for this, or even a name of someone I could ask?
This list of bootleg carts shows some with seemingly matching sized chips, and some with small chips on an adapter board, god knows how I'd track down a specific old bootleg cart, but it's nice to know they're out there.

Attaching the motion controls to another cart was something else I vaguely considered - the cart switcher is an interesting idea, but the only one that came up in a quick google is physically designed for the GBA SP, might not mesh with my Micro and would certainly make it awkward. IDK whether a flash cart or bootleg cart would have the correct GPIO pins accessible, but could be worth a look.

Those two links are about as close as I get to any kind of pin numbers on such things. Anything I have done with bootlegs is usually more in aid of figuring out how their saves work (some don't do normal things or things like other flash carts), though there are some tools looking at reprogramming them (though again most are more concerned with save dumping and writing) so you might find something more there.

Beyond that other than contemplating
http://problemkaputt.de/gbatek.htm#auxgbagamepakbus
http://problemkaputt.de/gbatek.htm#gbacartridges
https://www.darkfader.net/gba/
http://www.devrs.com/gba/hardware.php#harddev
None of which are particularly useful here I don't have a lot, and could probably learn 500x more from poking it with an oscilloscope and reading some manuals for if not the exact chips then ones from the same time and place in the world (even if it was custom for Nintendo there are probably half a dozen different but for a few pins or something uses a high signal rather than low equivalents from the same line).

Though it occurs that I neglected something last time and you might instead be able to take a state from something sent over the link port
https://www.darkfader.net/gba/psxmem.html
It is fast enough that you can do games like Turok co-op, mario kart, act as a gamecube controller in action games and multiplayer tetris of many flavours so I imagine you could probably get some kind of once per frame poll (not like the buttons are sensed any faster) of a tilt sensor and hack the ROM instead.

Wonder what that chap is doing nowadays.

Incase the project succeeds:
Make sure to document properly.
I have a Twiste Card laying around and it'd be cool to know more.
X

Any updates on this project? I thought of doing the same with a japanese pokemon crystal version. The circuit board of the japanese version just looks cooler and would be awesome to install an english rom chip to it! (not to mention its a cheaper copy)
Reactions: hippy dave

xSLAYRx said:
Any updates on this project? I thought of doing the same with a japanese pokemon crystal version. The circuit board of the japanese version just looks cooler and would be awesome to install an english rom chip to it! (not to mention its a cheaper copy)
Click to expand...

similar things have been done with gb games already, you can buy here - other places may exist:
https://www.tindie.com/products/jrodrigo/flash-memory-adapter-for-some-game-boy-cartridges/

-- also, I did see some guy on youtube literally desolder the rom chips of usa + jp crystal, and swap them over because he also wanted the Japanese cart lol
Last edited by cearp, Jan 21, 2022
Reactions: hippy dave

xSLAYRx said:
Any updates on this project? I thought of doing the same with a japanese pokemon crystal version. The circuit board of the japanese version just looks cooler and would be awesome to install an english rom chip to it! (not to mention its a cheaper copy)
Click to expand...

Sadly not yet, I did a bunch of googling at the time but I don't think I found a definite answer about a compatible flash chip.
Reactions: xSLAYRx and cearp