We have many Touchmasters here at GBAtemp.

So shovelware or not

I liked the original Touchmaster, it was just like the games you find at a bar. The second was was not as good, it was too slick or something..... I hope this one is okay. 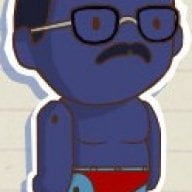 ya, i know, why cant it be a nicer sounding name?

tinymonkeyt said:
We have many Touchmasters here at GBAtemp.
Click to expand...

One of the games on TouchMaster 1 (5 Star General) had me hooked for ages. The others, not so much.

Don't get in between a kid and his ice cream cone.

Location
The Land of Wuz AKA: Kuromi

After playing this for almost an hour, I can tell you this is waaaaay better than Touchmaster 2 was. This has more of a mechanical feel to it, which you'll see as soon as you start the game. The card games are a bit lackluster, most of them being poker-based. The only one that isn't is Nine Hole, which plays like Tripeaks with a Golf theme

. I didn't play around with the strategy games but there are four of them (maybe a fifth one to unlock?). Under the action games, you'll definitely want to try Bumperball, which is pinball, but instead of hitting the ball with flippers, you use the stylus to guide this weird yellow thing to hit it instead. The other one to try is Electro Maze, which is kind of like Pac-man, except instead of Ghosts chasing you around you have to avoid hitting the electronic walls while collecting little green pellets. There may be another action game to unlock here as well. Then we have the puzzle games, which has, imo, the best game of the whole collection, Dice King 2. It's a Bejewelled clone meets Poker with dice (no, I'm not kidding). There's also Recall, which is Simon with colored drums, which is also pretty decent. There's only 2 word games unlocked at the start and they're pretty mediocre imo. Sea Word has you guiding a fish around collecting letter bubbles to spell out words, while the other, Wild Words, has you swapping letters around on a grid to spell them out.

All in all, this game is what TM2 should have been (actually, forget that game exists and call this one the true TM2), but it still isn't better than the first (it comes pretty close though).
D

This game is way better than the second one.

tinymonkeyt said:
We have many Touchmasters here at GBAtemp.
Click to expand...

Too good a play on words to pass up, amirite?

I think I tried the first one a ways back, but I can't remember what the TM series is all about. Is this kinda like Point Blank?
T

Nope it is a collection of mainly puzzle and card games.

I have to say this is way better than 2. It has some real addictive games in this time.
F

Looks retarded. Like some hybrid board games which means that the game is boring as hell.